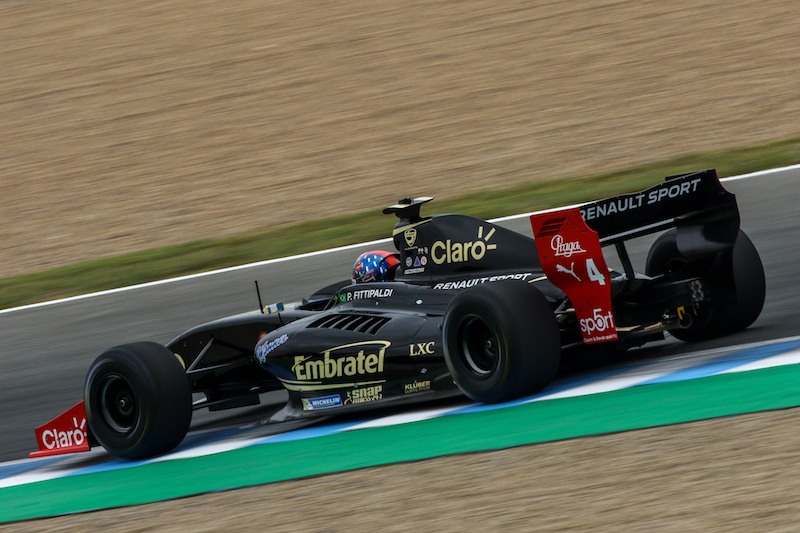 Pietro Fittipaldi took his first World Series Formula V8 3.5?win since Silverstone in race two at Jerez, bouncing back after Egor Orudzhev had briefly snatched the lead off of the line.

Orudzhev followed the Brazilian across the line, leading a double podium for SMP Racing by AVF.

A fantastic start from Orudzhev allowed the Russian to take the lead of the race before the first corner, but Fittipaldi didn?t let him relax, with a move around the outside of the next corner putting him back in the lead.

Orudzhev tried to fight back, but team-mate Matevos Isaakyan had caught up with the pair. Isaakyan fancied his chances at second and Orudzhev turned to defence, allowing Fittipaldi to pull out a small gap.

When the mandatory pit stop window opened, Fittipaldi led Orudzhev into the pits, whilst Isaakyan decided to stay out an extra lap. There was no change to the order of the top three.

In the?second half of the race, Fittpaldi maintained a small gap over Orudzhev. The best opportunity for Orudzhev would have been as the pair closed in on a yet-to-pit Roy Nissany, but the RP Motorsports driver dived into the pits before he could hold Fittipaldi up.

From that point onwards, Fittipaldi was able to breathe easy, finishing more than four seconds ahead of Orudzhev.

Isaakyan wasn?t able to breathe easy, with Alfonso Celis right on his tail.

Celis had jumped up to fourth off of the line, and was one of the first to pit. He closed in on Isaakyan throughout the second part of the race, trying to find a way past the Russian.

In the closing laps, Isaakyan almost lost the back end of his car, but Celis wasn?t quite close enough to grab the opportunity and crossed the line half a second behind Isaakyan.

RP Motorsport?s Damiano Fioravanti started?the race from fourth, but a difficult start allowed both Celis and Rene Binder ahead of him. The Italian?fought back, chasing Binder across the line, but he couldn?t make up the lost positions.

Race one winner Nissany couldn?t match yesterday?s performance. The RP Motorsport driver qualified seventh on the grid, and fell back to eighth after a poor start. He struggled throughout the first part of the race, before a long pit stop dropped him to the back of the field before retiring.

Konstantin Tereshenko led a train of drivers across the line. Team-mate Nelson Mason was chasing him through out the race, but he could never get close enough to make a solid attack. He was under pressure from Diego Menchaca and Yu Kanamaru, but nobody was able to make up a position.

Kanamaru was the last of the finishers, with Giusseppe Cipriani coming to a stop in the gravel on the final lap.

Binder?s fifth place means he stays in the lead of the championship, but Fittipaldi has closed the gap to just two points. Nissany?s non-finish?drops him to third in the standings.