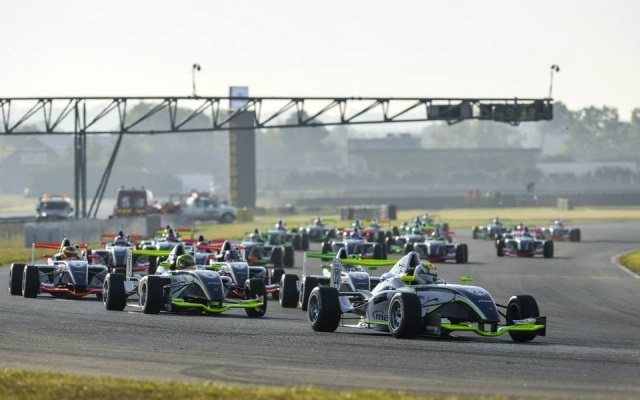 In 2006, Kevin Estre became the Formula Campus champion after tying?on points with Tristan Vautier and finishing narrowly ahead of Charles Pic. All three of them went on to become established names in the world of motorsport and the series, known as French F4 these days, has been unceasingly relevant ever since.

The series enjoyed a massively promising?field last year with some of the best karting graduates around kicking off their career in cars. Despite the competitiveness, Lasse Sorensen used his Formula Ford experience to dominate, finishing 16 out of 21 races in the top two. Following the footsteps of previous champions, Lasse will step up to Eurocup Formula Renault 2.0 in 2015.

Runner-up Dorian Boccolacci has graduated to the ultra-competitive FIA European F3 Championship in just his second year of cars. The rest of the top five – Felix Hirsiger, Joseph Mawson and Denis Bulatov – have found opportunities in other European single-seater championships, while 15-year-old Patricio O’Ward switched to Pro Mazda, where he currently sits fourth in the standings.

The 2015 field doesn’t seem to have suffered a drop in quality as five returnees are joined by some of the most promising karters from all over the world.

Having finished sixth last year, Valentin Moineault is regarded as the obvious title favourite. The 18-year-old French racer had a difficult start to his 2014 campaign but showed clear progress throughout the season and became a regular top five finisher for the final two rounds. The highlight of his season came in the very last race where he celebrated the first victory of his car-racing career.

Scandinavian duo Simo Laaksonen and Reuben Kressner will both return for a sophomore season after taking 17th and 18th last year respectively. Finn Laaksonen had a standout result at Pau where he claimed an impressive second place. Apart from that however, neither him nor Kressner managed to get a better result than seventh.?16-year-old Axel Matus and 15-year-old Hugo Sugnot-Darniche are the final two drivers to return. Both of them had quiet first seasons, their best finishes only 11th and 12th respectively.

Each year some of the most successful French karters make the step up to their national F4 series. 2015 is no different as Gabriel Aubry and Julien Darras both enter French F4.?Aubry, 17, has put himself on the map two years ago by finishing third in Trofeo Andrea Margutti KFJ, as well as taking sixth and seventh in Winter Cup and WSK Euro Series respectively. For 2014, he moved up to race in KF-level championships and continued to have promising pace, albeit lack of consistency left him?with less success.

Darras will be another French rookie to keep an eye on. The 17-year-old enjoyed a great karting career, having been the 2013 Italian KF2 champion and fourth in WSK KF Champions Cup a year later.

With Ferrari junior Guanyu Zhou making his debut in Italian F4, another Chinese karter will join the junior single-seater scene in 2015 in the French series. Ye Yifei‘s first international success came last year when he was fourth-best in the Junior ROK class of the ROK International Final. As part of his preparation, Yifei also participated in several karting events in early 2015, including the Vega International Winter Trophy where he finished runner-up.

2015 will mark the first season of SMP F4, a Northern European-based F4 series. Although several Russian youngsters decided to move to?the aforementioned championship, four of them will take on a dual programme, combining it with French F4.?Nikita Sitnikov is perhaps the one with the most impressive karting resume, having taken second in Trofeo Andrea Margutti KFJ, third in WSK Master Series and the 2012 Viking Trophy KF3 title.

Another Russian with big potential is Nerses Isaakyan, twin brother of Matevos, who raced in the series two years ago. He was eighth in the KZ2 class of WSK Final Cup and fourth in SKUSA Super Nationals. More importantly, he showed good pace in several SMP F4 tests, suggesting he will not need much time to start delivering.

Nikita Troitskiy and Alexey Korneev will also make their competitive debuts in single-seaters this weekend, having raced in the KF class of CIK-FIA and WSK championships last year.

Two drivers with F1 heritage also raise the quality of the grid. Giuliano Alesi, son of F1 race winner Jean, and Louis Gachot, whose father Bertrand had 45 Grand Prix starts between 1989 and 1995, will step up to car racing in French F4.

American Michael Benyahia has already gained some racing experience over the winter in Skip Barber Winter Series, collecting four podiums out of seven races which surely makes him one to watch.

The series welcomes another promising Frenchman in Julien Andlauer. He had been the 2012 IAME International Finale X30 Junior runner-up before delivering top ten finishes in SKUSA SuperNationals over?the following two years. His compatriot Sacha Fenestraz arrives to the series after a solid 2014 season, having finished seventh in both ROK Junior International Final and the National 150 championship in his native country.

Briton Alex Sedgwick also announced his intentions to participate in the series. The 16-year-old, however, only plans to join in at the end of June, choosing to focus on his studies until then. 2014 marked Sedgwick’s first year in cars and he showed promise by taking tenth in the competitive Ginetta Junior Championship.