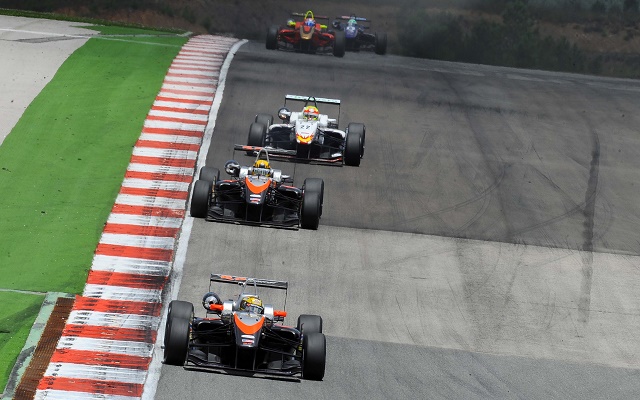 After a solid 2013, the F3 Open series began this year with a minor conflict this year when the FIA clamped down on the use of the Formula 3 name. The series organizers didn’t put up much of a fight and adjusted their name to now be known as Euroformula Open.

The name change didn’t have much of an effect on popularity of the series, with 31 drivers participating over the season.

After losing out on the title in 2013 on only dropped scores, Sandy Stuvik returned to the championship for another stab at the crown.

His teammate Artur Janosz and karting graduate Alex Palou, who teamed up with Campos Racing, both seemed to challenge the Thai driver in the first half of the year, yet Stuvik raised his game and won seven races in a row, completely killing the intrigue.

Below, we take a look at the main players of the 2014 Euroformula Open season. 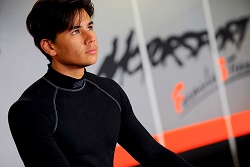 Unable to find a seat somewhere else, Stuvik was a late addition to the grid but, as 2013 runner-up, he was the obvious title favorite from the very beginning. He started the season with a second place, which was followed by four straight pole positions and four wins in the next five races.

However, a relatively bad weekend at the Hungaroring, where he only scored twelve points, allowed his rivals to close up and the title fight still seemed on. It didn’t last long though as Stuvik kicked off his second unbeaten run, which featured seven victories in a row. Impressively, he was untouchable on beloved classic tracks – Silverstone, Spa-Francorchamps and Monza.

Staying in the series was a safe career choice for the Thai driver but he sure made the most of it. Just like at the end of 2013, he took part in the GP2 post-season testing, but it would still seem to be overambitious to enter GP2 and expect to be successful from the get going. If he can get the budget, GP3 might be the better choice. Season rating: 9/10 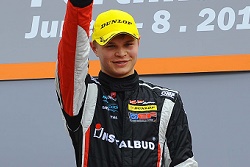 After Janosz enjoyed a promising introduction to single-seater racing with Campos, his move to team champions RP Motorsport seemed like a sensible move and it definitely paid out.

He started the season with a second place at the Nurburgring, followed by a maiden victory at Algarve and two more second-place finishes, cementing Janosz as a frontrunner. He was set to win at Jerez as well, but picked up a drive through for blocking. Yet, he managed to bounce back in Hungary, taking another win and briefly snatching the points lead. But nobody could keep up with Stuvik and, after a troubled Silverstone outing and a 14th at Spa, his title bid was over.

Janosz definitely proved himself as one to watch for next year. He took part in GP3 post-season testing with ART and Arden and showed some promising pace with the French outfit. Season rating: 8 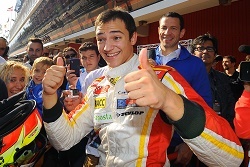 Similarly to Max Verstappen, Palou also made the huge step from karting to racing F3 cars, and, even though the competition was not as fierce as in FIA F3, the Spaniard was still one of the most impressive karting graduates of the year.

The Spaniard’s first appearance with the team was in the Winter Series and he showed his raw pace from the get-go – he ended the testing second-fastest before qualifying second for the race. His main campaign started even better, winning the first race of the season from pole. However, a mechanical retirement in race two left him playing catch-up with Stuvik. He continued with two third places at Algarve and a fourth at Jerez, which was followed by an impressive run of six consecutive top finishes, including a win at Hungaroring. He was basically ruled out of the fight after two race-destroying incidents at Monza, but ended the season on a high note, with a second place and a victory on home turf at Catalunya.

Palou took part in GP3 post-season testing, impressively ending both day one and two in fourth with Trident and ART GP respectively, and contested the Macau Grand Prix with Fortec. Season rating: 9 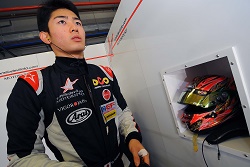 After two anonymous Formula Renault 2.0 years, Kanamaru joined Euroformula Open to advance his career and ended up finishing best of the rest behind the three title contenders.

Kanamaru started his year well but struggled for consistency. He took third in the Nurburgring opener and second at Algarve, but was out of the top ten in the other races of those weekends. He remained a consistent top-six finisher for the rest of the season, allowing him to score two further podiums at Spa and Monza, which in the end saw him narrowly secure fourth overall.

The F3 cars definitely seem to suit Kanamaru’s aggressive driving style better, so staying in them would make sense. He could stay for a title shot next year or, perhaps, look for one of the smaller-time seats in FIA F3, having made his top-level debut with Carlin in Macau. Season rating: 7 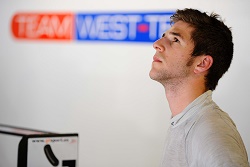 One of the top rookies from last year, Stern joined the British outfit of West-Tec – the team that won the 2013 title with Ed Jones – as one of top drivers of their lineup. However, a title assault did not pan out.

The Israeli racer kicked off the season by fighting through to seventh from 16th on the grid, but didn’t score in the next three races. He did well to recover from that with a couple of third places?at Jerez, but once again hit trouble at the Hungaroring, losing a solid poitns finish to a collision. Still, he’d finish third four more times, twice at Silverstone and twice in the Barcelona finale.

Stern surely aimed for more than fifth but he still proved he is a capable driver who can performa at this level. He has more than earned a third year in junior single-seaters, but should consider a change of scenery. Season rating: 7 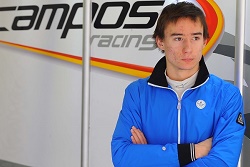 Tereshchenko graduated after finishing fifteenth in Formula Renault 2.0 Alps and his rookie season in Euroformula Open was certainly the best one of his single-seater career.

He finished between fifth and eighth in each of the first five races of the season and then peaked with a third place at the Hungaroring. However, the rest of his season didn’t quite live up to those standards – with his best finish in the second half a fifth place at Monza and five non-scores.

Behind Palou and Kanamaru, Tereshchenko ended up as third best rookie. Should he stay for a second year, he could aim for a frontrunner role in the series with possible race victories. Season rating: 6 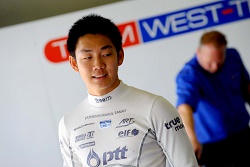 He started his season in a promising fashion with a fourth and fifth place. He then scored a sixth place at Algarve but would only pick up five points in the next six races. He returned to the top five for one last time at Spa-Francorchamps. In terms of consistency, Sathienthirakul was among the best, scoring points in 12 races out of 16. However, he lacked any real breakthrouhg performances.

Still, as a driver who managed to produce solid results while learning the car as a rookie, Sathienthirakul could return next season for more. Season rating: 6 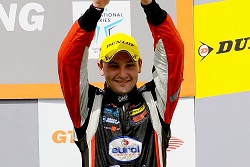 Also a single-seater rookie last year, Saravia was generally on pace with 2014 runner-up Janosz throughout 2013. As a result, he was also chosen by RP Motorsport for this season, but was definitely outshone by the Pole’s breakthrough.

Saravia’s season started slow, with only four points at the Nurburgring was followed by a double retirement at Algarve and a best of eighth at Jerez. He showed great improvement at the Hungaroring, securing his first podium in European racing. The rest of the Guatemalan’s season was punctuated by four sixth-place finishes, which nudged him up to eight overall.

Although Saravia definitely improved from last year, he lacked consistency, meaning he is unlikely to be ready to move up just yet. Season rating: 6

As the 2013 Euroformula Open Copa class runner-up, Cameron Twynham started the season with high hopes of fighting the title. While not fighting for victories, he started the season well enough, with five top-six finishes, including a podium at the Nurburgring. But, after a disastrous weekend at the Hungaroring, the Briton walked away to join Formula Renault 3.5 for the rest of the year following an encouraging debut.

His compatriot Sean Walkinshaw, who rounded out the top ten, was Campos Racing’s third driver and he had a very consistent year. He was classified in all but the final race and never finished worse than 12th.

Dzhon Simonyan was the most hectic driver in the field. Although he started a lot of races in the top ten, he only finished five races in the points, with many of his days caused by incidents, often self-inflicted. If he can cut that out, he could very well be a frontrunner next year.

Nicolas Pohler and Che One Lim took 12th and 14th in the standings as Copa class graduates. Between them, part-time driver Christopher Hoher took 13th, having shown good pace on his appearances yet held back by a series of issues.

Protyre Formula Renault graduates Wei Fung Thong and Henrique Baptista both had their learning years in the series and finished ahead of regulars Saud Al Faisal, Costantino Peroni and William Barbosa.

The series also had some high-key guests in the second half of the year. Two of them, Alex Toril, the FIA F3 driver who finished fifth last year in F3 Open and Italian F4 star Leonardo Pulcini, were both eligible to score points and did so in both of their races.

Other drivers, such as Nelson Mason, who took second in the final race of the year, 2012 Copa class champion Kevin Giovesi and Formula Abarth champion Alessio Rovera, were classified as guest drivers.