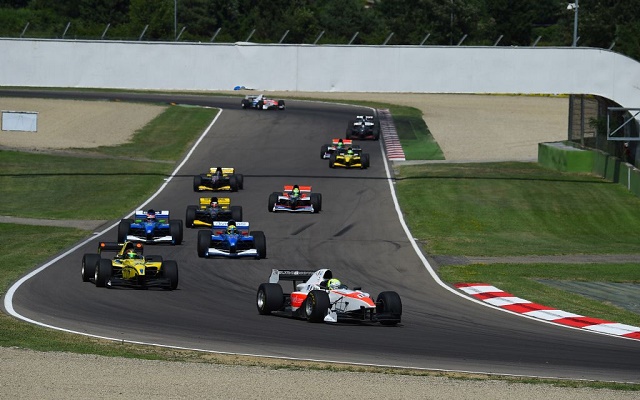 Despite some notable flaws, the 2013 Auto GP season was quite thrilling as it delivered a season-long close fight for the championship. In the end, four drivers went into the finale with a shot at the title and it was Vittorio Ghirelli who emerged victorious after a breakthrough season.

2014 promised more of the same, with a number of potential championship contenders landing seats in the series. Kevin Giovesi and Tamas Pal Kiss returned after great part-time stints in 2013. Sergio Campana, who had finished that season in third, was also back. Former F2 frontrunner Markus Pommer landed a coveted Super Nova seat. Finally, despite some clashing GP2 commitments, 2013 runner-up Kimiya Sato was back as well.

All of that made for excellent intrigue, but the suspense in the title fight was short-lived. While some of the individual races were great, the champion would become obvious after just three rounds. 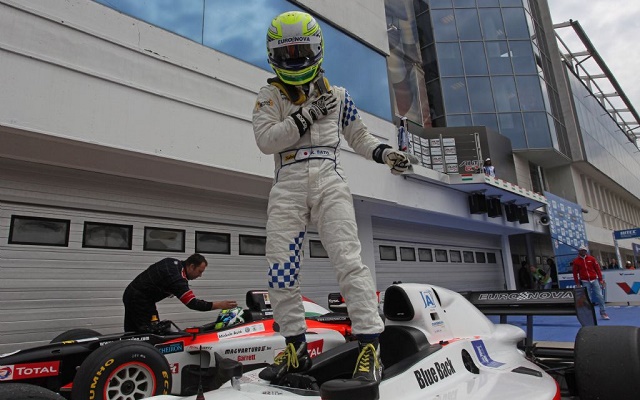 Having narrowly missed out in 2014, Sato made the most of his second shot at the Auto GP title (Photo: Auto GP)

Kimiya Sato started off the season by qualifying in fifth place at Marrakech, which was quite promising for those worried that last season’s runner-up came back to dominate. Unfortunately for them, it was a false dawn.

The Japanese driver won a crazy opening race to take the lead in the championship, which he maintained by finishing on the podium in the next three races.

But his biggest hit to the opposition was delivered at the Hungaroring. He seemed to have hit trouble in qualifying, caught out by a red flag to start ninth. But it took him one lap to take fourth and, eventually, he fought through to the win. Eighth on the grid for the second race, he won that one as well.

It should’ve been over after that, but a glimmer of hope for his opponents surfaced when he missed the Monza round. Yet he’d come back at Imola to take victory again. At Spielberg, he took his first pole and actually lost the lead off the line, but bounced back to win yet another feature race.

Finally, at the penultimate Nurburgring round, brake problems in qualifying forced Sato to start last. But, as he fought through and those around him picked up penalties for yellow flag infringements, he’d again be the winner. The day after that, he crowned champion.

The fact that he missed four races speaks volumes about his dominance. He was on the podium in all but two of his outings, one of which included a suspension failure when running in third. 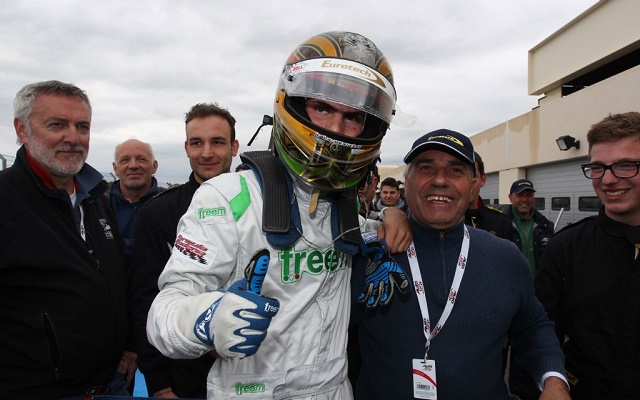 After losing two wins via post-race decisions in 2014, Giovesi finally got one to stick this year (Photo: Auto GP)

There might not have been much of a title fight, but those in Sato’s shadow did manage to put on a solid scrap for the runner-up spot, which seemed to change hands every weekend.

The first two rounds of the season saw qualifying locked out by Kevin Giovesi with the new Eurotech squad. He led much of the first race at Marrakech, but lost the lead to Tamas Pal Kiss and subsequently forced the Hungarian and himself into the barriers.

After nearly stalling on the grid in race one and then spinning out, Super Nova’s Markus Pommer lined up on race two pole and comfortably won his first race. Kiss and Giovesi didn’t take long as well, celebrating their first victories at Paul Ricard.

Out of the three, Kiss was the most consistent. He often finished on the podium and did not record a DNF since the opener. However, an Imola weekend full of technical difficulties was followed by the Hungarian leaving Zele Racing for Virtuosi for the three final rounds. He won two races with the British team and comfortably secured second in the standings.

Pommer was definitely the top man in qualifying, claiming four poles throughout the season, but struggled to convert that into race pace. In fairness, he also had a fair share of mechanical issues – with two pole positions undone by tyre issues (Hungaroring) and a first-lap failure (Imola).

Giovesi lost some top results to luck as well. At Monza, a pit stop issue robbed him of a podium, albeit he rebounded to win the second race. He was on track to win a third race at Spielberg, but his car’s wheel broke off, sending him into retirement. 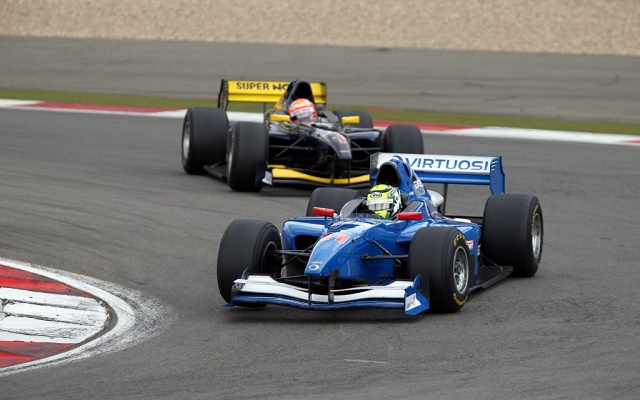 Kiss and Pommer ended up taking centre stage in the fight for the runner-up spot (Photo: Auto GP)

When the Italian missed the finale, he ended up slipping back to fifth in the standings, overtaken by Andrea Roda. The Virtuosi driver enjoyed easily his best season in single-seaters yet, although it started with disaster when he crashed out of second on the final lap in the Marrakech opener. Still, he was classified in seventh and ended up enjoying a perfect point-scoring run. At Spielberg, when Giovesi lost his wheel, Roda picked up the pieces to get his first race win.

Michela Cerruti also enjoyed a bit of a single-seater breakthrough, quickly getting up to pace with the Super Nova team and eventually held off Giovesi at Imola to take her first Auto GP victory. She then fought her way up from the back of the grid in a retirement-heavy Spielberg race, claiming a second podium.

A word has to be said for the series’ regular journeymen Michele La Rosa and Giuseppe Cipriani, who both seemed to improve on the previous seasons and even got to stand on the podium, albeit only in the ridiculous Marrakech opener. 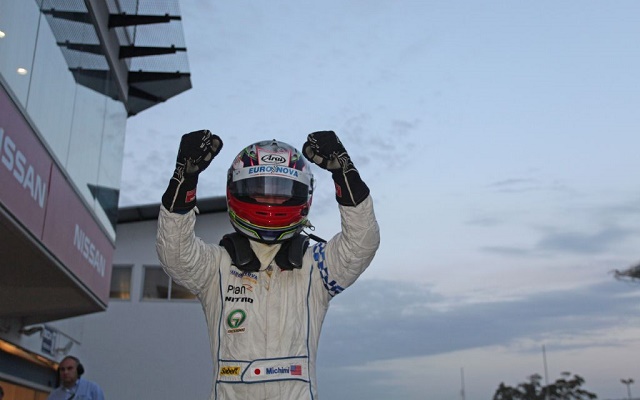 It was a pleasant surprise to see F3 Open race winner Sam Dejonghe get a chance with Virtuosi after missing most of 2013. He had some tough luck during the first two weekends, hit by La Rosa at Marrakech and retiring due to mechanical failures at Paul Ricard. He did take a maiden podium at the Hungaroring, but lost the seat right after.

Sergio Campana was set to contest his third year in Auto GP, but crashed out in race one at Marrakech and was out with technical issues in race two. He left the series after the round, going on to race in FA1 for the rest of the year.

2011 CIK-FIA KF2 world champion Loris Spinelli got a chance to race with Eurotech. After finishing sixth in the opener, he led the Marrakech reverse-grid race early on before parking it in the barriers. Another reverse-grid chance was wasted when his gearbox failed at Paul Ricard and, after two further difficult rounds, he left the series.

Shinya Michimi was on course to take fourth on his Monza debut, but retired with a car issue. He did manage a solid points weekend at Spielberg and then won the Estoril finale due to a superb early stop strategy.

Ex-F1 driver Antonio Pizzonia and GP3’s Luis Sa Silva joined Zele for the Estoril finale and both got to stand on the podium in the reverse-grid race. 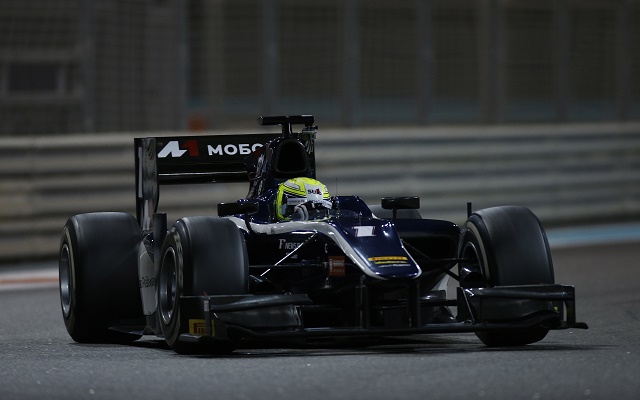 After having spent 2014 with Campos, Sato went on to test with 2013 champions Russian Time (Photo: Dunbar / GP2 Series)

Sato’s concurrent debut season in GP2 was nothing to write home about but his Auto GP dominance should earn him another stab at the F1 support series. During the Abu Dhabi test, he ran with Russian Time for a day.

Kiss reportedly seeks the budget for an ELMS seat and apparently has offers from several teams.

Pommer might have failed to win the Auto GP series, but has the “small” consolation of a well-deserved German F3 title. He seems to be in Motopark’s good graces and could move up to FIA F3 with the Oschersleben squad.

Cerruti is currently racing in Formula E with Trulli GP, having recorded a best finish of 12th in the three races.

Giovesi retuned to GP2 for the season finale, but has not participated in the post-season testing. His compatriot Roda took part in a Porsche Carrera Cup Italy introduction test.