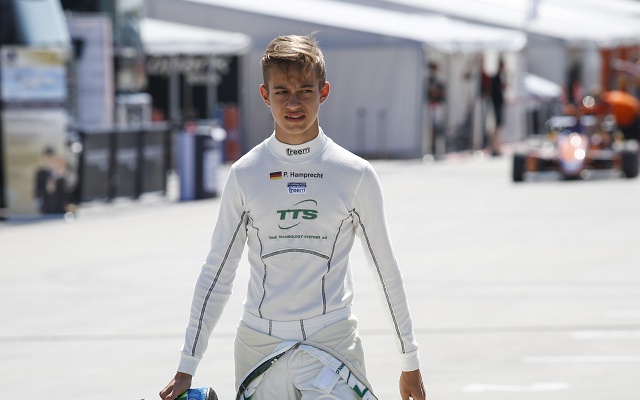 Hamprecht, 17, made his single-seater debut with Mucke in ADAC Formel Masters last year, contesting five rounds. He left the series after securing his best finish of fourth at Slovakia Ring.

He also guested in two Formula Masters China series rounds, securing a podium at Shanghai, and made his Formula Renault 2.0 debut in the NEC series with Inter Europol.

“I am happy to be a part of a team as successful as Koiranen GP,” said Hamprecht. “I will do my best to satisfy the team, my sponsors and myself. I know the category isn’t easy, but I have the best team behind me and I will learn as much as possible.”

Riener, 19, is another ADAC Formel Masters graduate, having raced in the category with Neuhauser in 2013. His best finish of the season was a second from reverse-grid pole at Lausitzring and he ended up finishing 12th overall.

He raced in FR2.0 NEC full-time in 2014, finishing 11th overall. Riener also scored his first 2.0 podium in the Alps round at Monza and guested in the Eurocup with Koiranen at Jerez.

“Working together with Koiranen in the upcoming season is a great opportunity,” stated Riener. “I’m very comfortable being surrounded by a very professional and friendly team. I have already learned a lot with the team during our test days and I am confident that I will continue to improve throughout the next season.”

Baptista, 17, debuted in single-seaters with a season in F4 Sudamericana last year. He promptly won the series, taking four wins and finishing on the podium in all but two races.

“I know that competition will be much tougher in Europe and the car is pretty different,” admitted Baptista. “But I am very happy to be part of Koiranen GP next year and I am highly motivated to do well.”

Koiranen won the 2014 teams’ and drivers’ championships in both Eurocup FR2.0 and the Alps series.