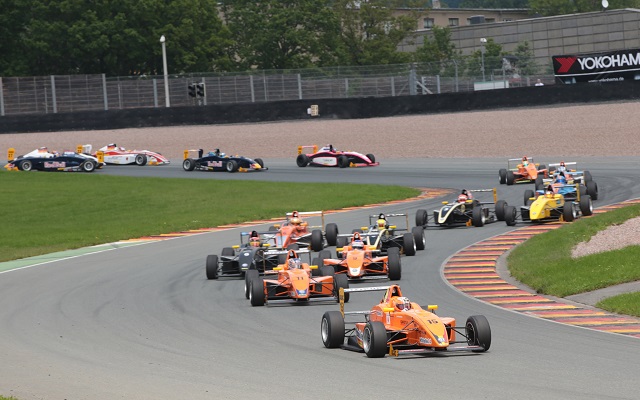 In 2013 the ADAC Formel Masters once again proved itself as one of the best entry level single-seater categories in the world. With strong grid sizes and an impressive list of graduates, including recent champions Marvin Kirchhofer and Pascal Wehrlein, the category continued to produce stars in the making. Alessio Picariello used his experience in various categories to get the jump on the field early, but he was kept honest by such emerging stars as Maximilian Gunther and Marvin Dienst, who will both return in 2014.

This year will see a smaller grid than in the past few seasons but lack of quantity does not equal lack of quality and the talent is still clearly there with the aforementioned Gunther and Dienst returning, along with fellow returnees?Ralph Boschung and?Mikkel Jensen. The introduction of several karting starts, among who are Dennis Marschall,?Tim Zimmermann and?Igor Walilko, also add star power to a field that should produce good quality racing and even more stars of the future. 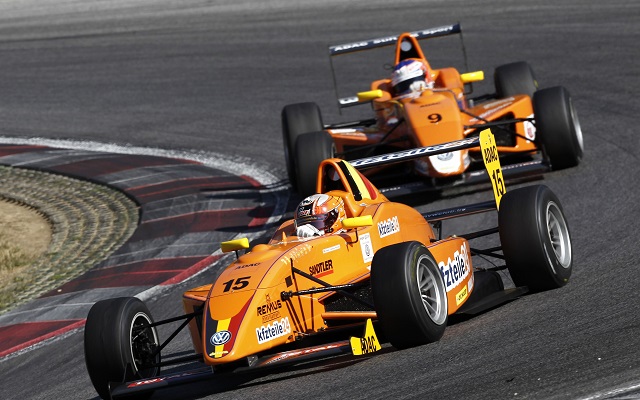 2013 proved to be particularly successful for Mucke Motorsport in ADAC Formel Masters, with the Berlin-based team picking up the top two spots in the drivers standings as well as taking the team?s title. The squad returns in 2014 with an experienced line-up led by Maximilian Gunther, who returns to the team after he finished second last year. Also returning to Mucke for a second season are Kim-Luis Schramm and Giorgio Maggi. Fellow sophomore Marvin?Dienst makes the move to the team after racing with Neuhauser Racing last season, while newcomer Philip Hamprecht rounds out an impressive five-car line-up.

16-year-old Gunther was the revelation of last season, after spending 2012 on the sidelines. Having come second in the 2011 Formula BMW Talent Cup, he took the fight to his more experienced teammate to finish second in his first season of the ADAC Formel Masters. He now enters his second season with the pre-season favourite tag, which he rightly deserves, as he will look to build on what was a more than successful 2013.

Schramm also returns after a solid maiden campaign with the team in which he finished fourteenth in the standings. He produced some quality drives throughout the season and scored several top ten finishes, including a podium at the Red Bull Ring in August. The 16-year-old German will be looking to move further up the standings in 2014 and challenge for podiums as well as the occasional win.

16-year-old Swiss driver Maggi endured a tough 2013 campaign, being one of only two full-time drivers to fail to secure points, but improved steadily throughout the season to be on the fringe of the top ten towards the end. He will look to build on to what he learned and aim for several points scoring finishes this season.

After securing the 2012 Formula BMW Talent Cup title, Marvin Dienst stepped in to the ADAC Formel Masters with Neuhauser Racing and did an admirable job on his way to fifth place in the standings. The 17-year-old German, who is now a member of the McLaren Performance Academy, makes the move to the reigning champions with the title on his mind and will prove to be stiff competition for Gunther at Mucke.

Rounding out the five-car squad for the reigning champions is 16-year-old Philip Hamprecht, who take his first steps into car racing after a strong karting background in his native Germany – highlighted by a sixth place finish in the Bambini B class of the ADAC Kart Masters in 2008. 2014 will very much be a learning year for the youngster, but if he can learn from his experienced teammates there is no reason why he wouldn’t be able to pick up some solid points. 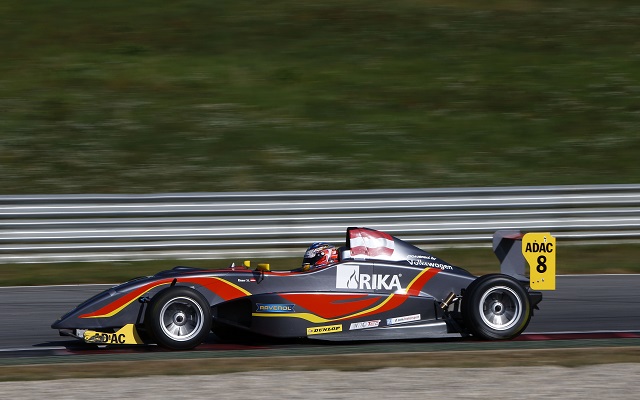 The Austrian team was once again at the sharp end of the field in 2013, having previously almost taken Gustav Malja to the title in 2012. They return once again with a slimmed down two-car line-up consisting of ADAC Formel Masters sophomore?Mikkel Jensen and German karting graduate?Tim Zimmermann.

Jensen endured a tough first season in the ADAC Formel Masters last season as the Lotus squad struggled for pace throughout the campaign. The Dane was able to show his true potential with a third place in race two at the Sachsenring, but he struggled to find any consistency throughout the season. The change of scenery might be the best thing for him and he has now moved a team that has enjoyed a solid streak of success in the series. He will be the number one driver in the team and is expected to lead the charge for Neuhauser, having looked immensely quick in the pre-season.

Zimmermann comes to the ADAC Formel Masters after a four year karting career in Germany and Europe, competing in the CIK-FIA European KZ2 Championship in 2013 with ART Grand Prix. 2012 was his most successful year to date as he finished second in the KF2 class of the ADAC Kart Masters and also took second in the KF2 class of the Euro Wintercup. The 17-year-old has serious potential and will be expected to perform early on and, with an experienced teammate, he has a bench mark to aim for and should score consistent points throughout the season. 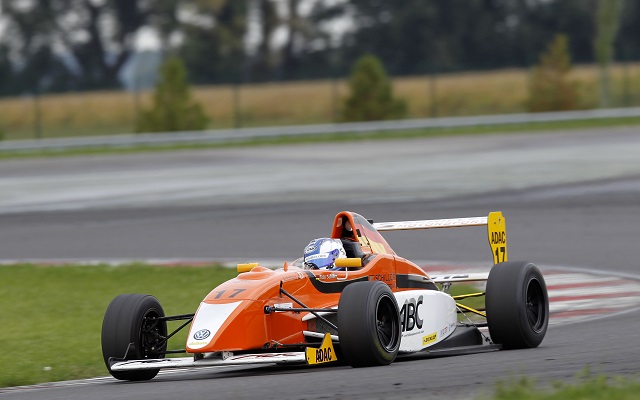 Schiller Motorsport became unexpected frontrunners in ADAC Formel Masters in 2013, with an experienced Jason Kremer at the wheel finishing third in the championship as the best placed non-Mucke Motorsport car. The German team returns this season to once again run?Fabian Schiller and he is joined by Formula BMW Talent Cup graduate?Nico Menzel.

Schiller was able to put together an admirable rookie season in the ADAC Formel Masters. The 16-year-old took his time to find his feet in the championship, but benefited from having Kremer as a teammate and was able to build up to take his maiden win in the championship in race three at Lausitz on his way to 11th place in the final standings. Now in his sophomore season, he will look to fight at the front with Gunther and Dienst and challenge for wins and ultimately the title.

Menzel comes to the ADAC Formel Masters after finishing second in the Formula BMW Talent Cup. He has some experience on the circuits he will race on in 2014, especially Oschersleben – the site of the first round of the season – and will have a teammate that will be towards the front to learn from. All in all, he will look to put together a solid rookie campaign. 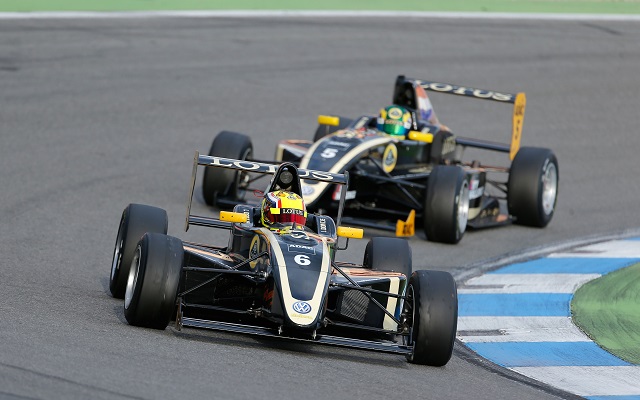 Like Mucke Motorsport, Lotus has become a stalwart in the ADAC Formel Masters and will be looking to rebound from a disastrous 2013 with a strong showing this season. It returns with a three-car line-up led by?Ralph Boschung, with the Swiss ace joined by karting graduates?Joel Eriksson and?Dennis Marschall.

Boschung returns to the ADAC Formel Masters switching to Lotus from Team KUG Motorsport after a strong rookie campaign, where he finished seventh in the driver standings. He showed strong pace with several podium finishes and eventually inherited his maiden win after the final race of the weekend at the Slovakia Ring. He now moves to Motopark, who are looking for a resurgence the season and seem to have signed just the right driver to manage that. It’s highly likely that Boschung and his team will both be looking to start at the front and take the fight to Gunther and Dienst at Mucke.

Joel Eriksson, who is the younger brother of GP3 racer and ex-Lotus driver Jimmy Eriksson, makes the step up to the ADAC Formel Masters after a strong karting CV in his native Sweden and Scandinavia. He joins into the Lotus setup that helped his brother achieve success in German F3 and will be looking to learn from his experienced teammate and potentially join his brother in bringing home some trophies for the Oschersleben team.

Rounding out the three-car line-up is German karting graduate Dennis Marschall. The 17-year-old is among the latest car rookies to race under the ADAC Stitftung Sport scheme – which has given junior single-seaters such stars as Pascal Wehrlein and Marvin Kirchhofer. Given his solid karting CV, Marschall will look to make an immediate impact on the championship. 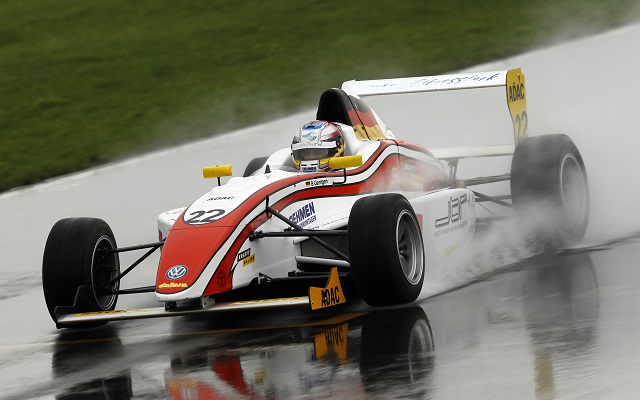 JBR Motorsport & Engineering return for another season in the ADAC Formel Masters with a three-car line-up, albeit only two cars will be run for the entire season. David Kolkmann and?Igor Walilko will make up the full-timers with newcomer?Kevin Brutschin joining them for the final two rounds at the Sachsenring and Hockenheim.

Kolkmann makes the move to car racing without amassing a particularly long karting background but will look to steadily improve in his rookie season and aim to take the occasional points finish for the German team.

Joining Kolmann for the season is Polish karting graduate Igor Walilko, who is also making the transition from karts to car racing in 2014. Waliko possesses a strong karting CV throughout Europe, having raced in the KF class of the CIK-FIA European and World Championships. As such, he will be expected to perform early on and lead the JBR squad.

Rounding off the team will be Kevin Brutschin, who will join the team for the final two rounds. The newcomer will be looking to work on his race craft ahead of what would be an expected full campaign in 2015 and should be able to learn from his by-then experienced teammates. 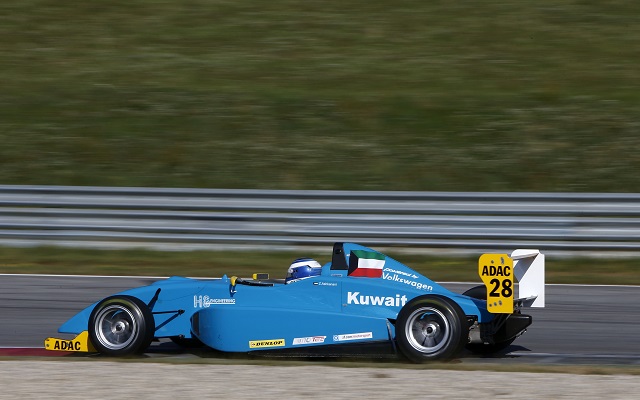 The final entry in this season’s ADAC Formel Masters comes from new team HS Engineering. The Austrian team will run the only lady racer in the field,?Corinna Kamper, who joins the squad after a couple of season in Formula Renault 2.0. She has already tested with the team on at least two occasions and will look to build on her? experience in car racing to fight for the points, which could be made difficult by the Austrian squad being a single-car operation that is going up against the multi-car likes of Lotus and Mucke.