Home Featured Who was fastest in Formula 2 in 2022?
FeaturesFormula 2Reviews 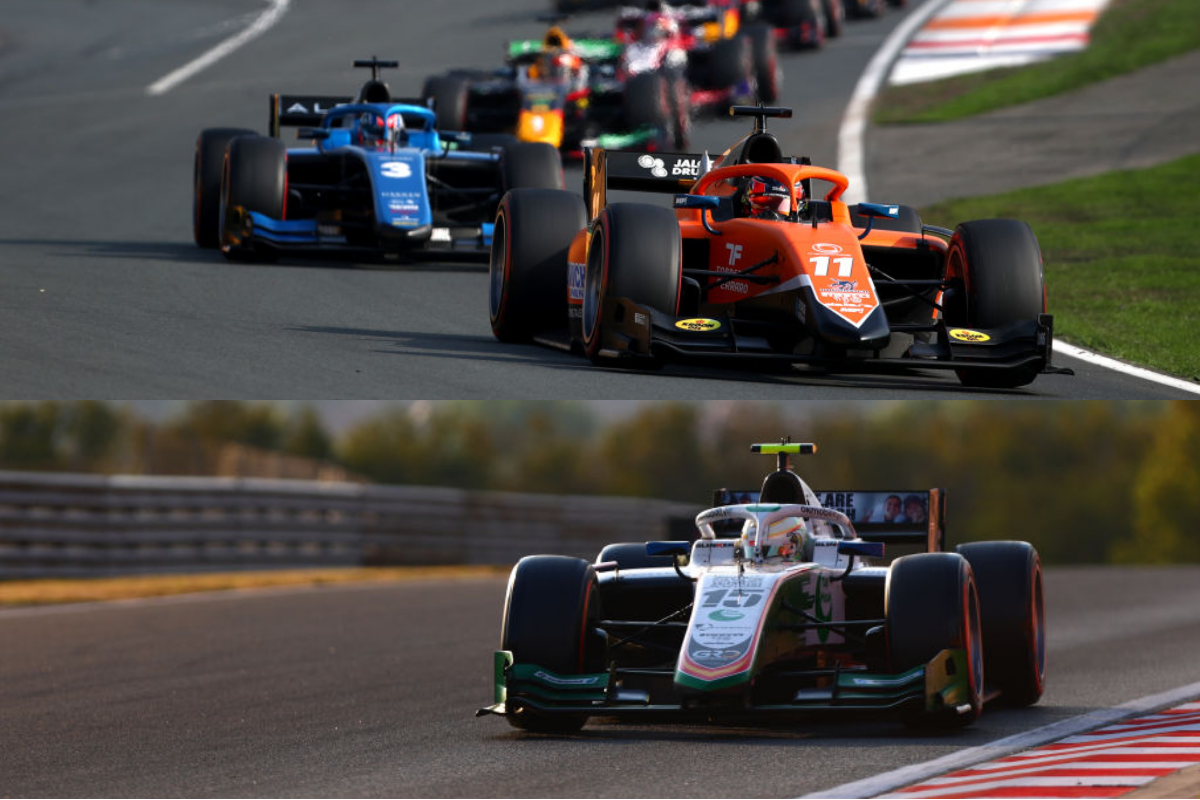 The points table never tells the whole story, but laptimes alone don’t either. What can be read in 2022’s data?

You don’t win the Formula 2 championship by 101 points without some serious pace, and MP Motorsport’s Felipe Drugovich was repeatedly the benchmark driver this year for one-lap pace in qualifying and also tyre management in races.

The technical alliance forged at MP over the last few years proved explosively effective this season in F2, and there’s no denying Drugovich had an important part to play in bringing the team to the front. And the easiest way to show that is the gulf between himself and rookie team-mate Clement Novalak.

Having come third in the FIA Formula 3 Championship last year, Novalak is no slouch. But the scale of change required in driving to get the most out of the Dallara F2 2018 and its fickle Pirelli tyres really knocked him back at first and even when he was fast in races it often came after a qualifying session in which he could not work the tyres in the way needed to be quick.

On the single-lap ‘supertime’, an average of each driver’s position in relation to the absolute pace from all 14 of the race weekends, then Drugovich is the benchmark driver and Novalak is down in 23rd place, one whole percent slower than Drugovich on average. Translated into laptime, if the absolute pace was a 1m40.000s lap at every circuit, then Drugovich was the most consistently close to that at 1m40.305s and Novalak would be on 1m41.365s.

There was 18 drivers within a percent of Drugovich’s benchmark figure, with Virtuosi Racing’s Marino Sato and Novalak the only two full-timers outside of that bracket. Novalak will reunite with his F3 team Trident for next season, while Sato’s inability to get on top of the Pirelli tyres after 81 races (and no finishes higher than eighth) leave him searching for a seat.

Throughout his three years in F2, 2019 Euroformula champion Sato has worked alongside GP2 race-winner, Formula V8 3.5 champion and former Formula E driver Tom Dillmann, with their focus primarily being on improving tyre understanding.

“Tom is obviously really experienced and he has taught me loads that’s been really helping me to get adapted to these [tyres],” Sato told Formula Scout during the 2022 season.

“I think with his help, my management and the pace in the race runs is looking quite decent. Especially on the managing-wise. Often I think we’re doing quite a good job. But also with the help of the team, who are providing me a good car for the race. He’s not along with me on the track this year but I’m always chatting with him and he still gives me good tips always.”

Having been 22nd and 23rd in the supertimes respectively, the picture for Sato and Novalak on race pace isn’t much better. Novalak is 22nd but a signifcantly closer 0.697% per lap off his team-mate compared to the absolute pace, while Sato is a further 0.330% slower than Novalak and only higher than three part-timers.

Identifying what made the ‘slow’ drivers slow is broadly easier than determining what makes the difference between the top drivers in the championship, particularly as averages combine performances on different circuits. A comparison of two drivers at one track and why one is faster than the other only really applies to that track.

The averages can tell a wider picture of a driver and team being able to adapt themselves and their set-up better than others, particularly when a driver has a consistent margin to the absolute pace or one that decreases by percentage over the season in a way that corresponds with what the driver is saying over the course of that time about gains made, but when there are highs or lows that stray wildly away from that norm then it makes the average less applicable to use for a ranking.

A particularly tricky problem for analysing F3 this year, but not too much in F2 by comparison, has been track limits. Drivers can lose their fastest laps in qualifying to tiny errors (less excusable when repeated multiple times in a single session), and race run data (calculated by a rolling average of 10 consecutive laps set at a representative pace) avoids deleted laptimes where possible so as not to include laps where drivers unfairly gained time.

Safety car-filled races where the amount of uninterrupted action is limited to short bursts is excluded from these season-long calculations, and means 23 out of 28 races are taken into account for Formula Scout’s calculations.

The former Formula 1 driver contested three rounds mid-season as a substitute for the injured Ralph Boschung, returning to a series he last raced in back in 2018. Merhi couldn’t get off the back row of the grid in qualifying on his comeback at the Red Bull Ring, and fell foul of track limits in the sprint race, but came alive in the feature race in a stunning way.

A disputable track limits penalty stopped Merhi from equalling the 14-year-old record for winning from the lowest grid spot in GP2/F2, but he still ended the weekend with a podium finish. And that wasn’t even the race where he was the benchmark driver on long-run pace.

Merhi failed to finish both Paul Ricard races, then was a distant 14th in the Hungaroring sprint race. However he was the fastest driver on long-run pace in that race as a pitstop meant he had fresher tyres than anyone else when the track was at its quickest and the fuel loads were at their lowest. A strong start to his second stint in the feature race the next day meant his three-race average put him ahead of Drugovich – the benchmark for race pace on three ocassions – whose average was actually dragged down by two races.

In the Hungaroring feature race he undercut everybody with his switch to the medium tyres, but he made his move too early as he faded from fifth to ninth by the finish.

A simular situation occurred in the Zandvoort feature race, although this time Drugovich actually claimed victory. He made his pitstop from the lead on lap 13 of 38, but only got a few laps of having a faster tyre than his rivals before the safety car came out. Drugovich was seventh at this point while title rival Theo Pourchaire was fifth, and Drugovich’s tyre advantage was being wasted at the same time as Pourchaire was being able to extend his first stint by running at lower speeds for nine laps. 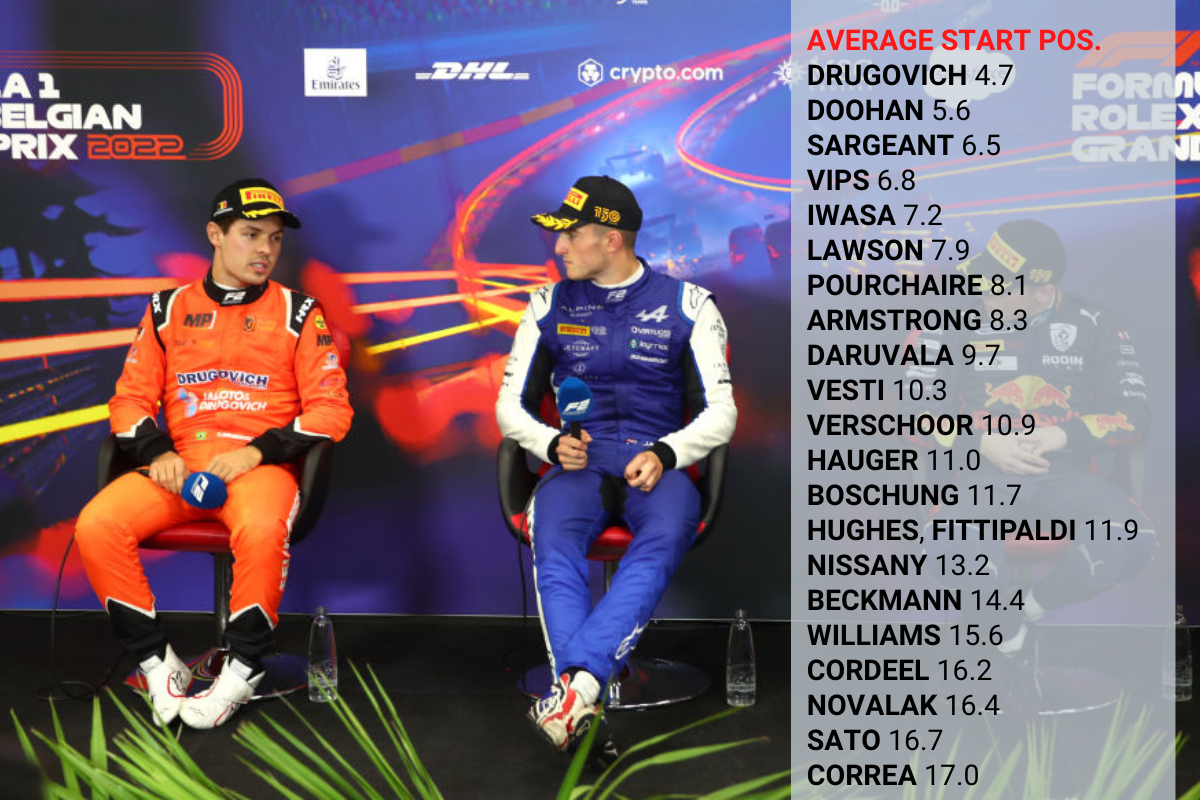 The ART Grand Prix driver pitted from second after racing resumed and dropped to 12th, while Drugovich slotted back into the lead once several others had pitted. Needing only to make his soft tyres last 12 laps, Pourchaire could push harder and was on average 1.094 seconds per lap faster than the winner through the final stint of the race to finish ninth.

Although Pourchaire finished second in the championship and won three feature races, he utterly lacked the consistency that Drugovich was lauded for and he also had some bad luck including retiring from the season finale after striking a bird.

Second-best was Virtuosi’s Jack Doohan, who on average started over 11 places ahead of his team-mate Sato, and Novalak’s average starting position of 16.4 is 11.7 lower than Drugovich’s.

Prema was noticably weak in qualifying with Jehan Daruvala (9.7) and Dennis Hauger (11.0), and that translated into three feature race podiums. In 2021 the team had finished one-two in the championship with Oscar Piastri and Robert Shwartzman.

Charouz Racing System’s Enzo Fittipaldi qualified in the top 10 four times in 14 attempts, with an average starting spot of 11.9, but remarkably claimed four feaure race podiums and was one of only five drivers to score more than 100 points in those races, and went into the final round in contention to be F2 runner-up. 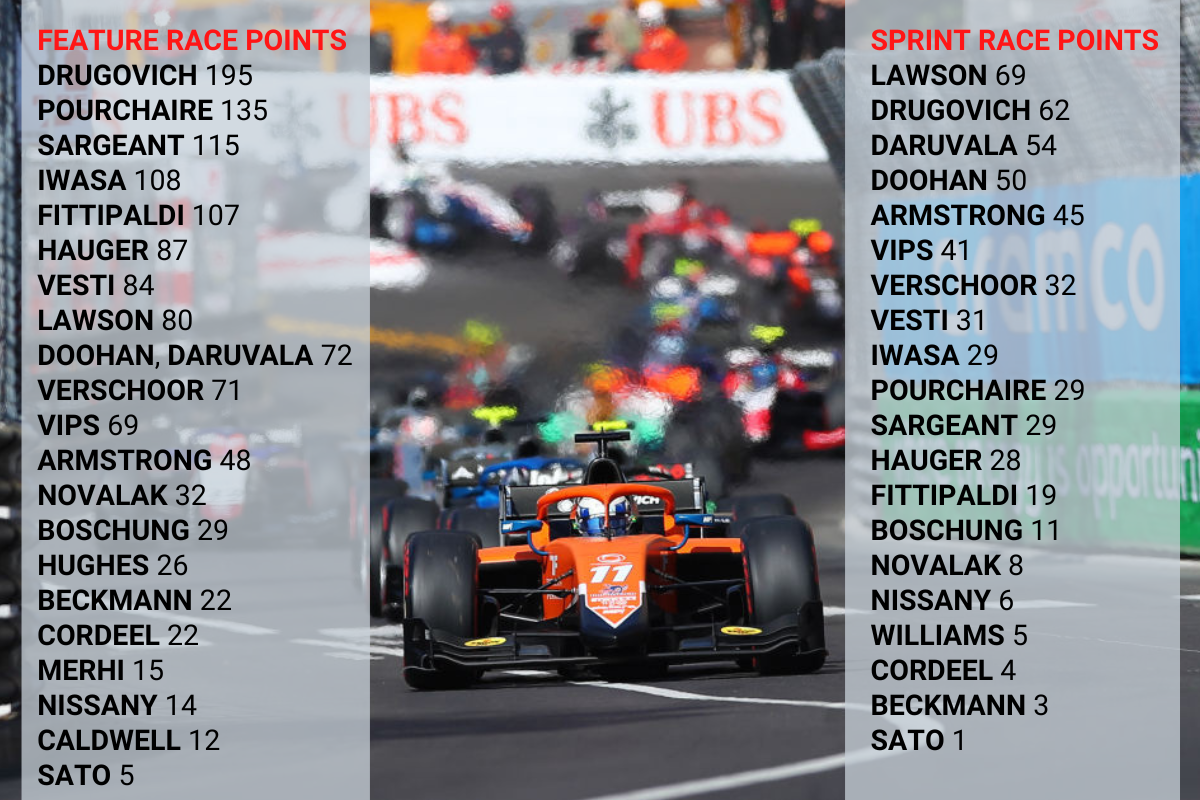 In contract, Hitech GP’s Marcus Armstrong finished 13th in the standings for the third season in a row despite being sixth on the single-lap supertimes, fifth on race pace across the season and leading 93 laps, a tally only bettered by Drugovich.

His three sprint race wins all came from the front row of a reversed grid, enabling him to collect points from being consistently in the second half of the top 10 on pace. Although he never finished higher than fifth in a feature race, more of his points came from those than sprints (48 to 45).

Pourchaire was a comfortable second behind Drugovich for points scored in feature races, but after the summer break Van Amersfoort Racing’s Amaury Cordeel scored 11 times as many points as him in those races. Cordeel, who was banned from one round for accumulating too many penalty points, finished 17th in the championship with a best finish of fifth.

Campos’s Olli Caldwell and DAMS’ Roy Nissany also recieved bans after reaching 12 penalty points on their race licenses. In total 33 penalty points were issued to 13 different drivers over track limits violations, and Caldwell collected eight of those. There were 31 points issued for contact between cars.

Cordeel got four points and a 10-place grid penalty for speeding under red flag conditions and a 30s penalty plus three points for overtaking under double waved yellow flags after the chequered flag of a race, Hauger was docked for entering a closed pitlane in a contentious incident,  Nissany put marshals at risk by attempting to start his car while it was being pushed and VAR’s David Beckmann got two points on his licence due to a mechanic being on the grid at Silverstone when the 15s board was shown (a violation usually teams only get penalised for).

The only full-timer to go the year without collecting any penalty points was Carlin’s Logan Sargeant, with Carouz’s Cem Bolukbasi and Tatiana Calderon managing the same across eight and four rounds respectively. Of the four drivers who did one round, Campos’s Lirim Zendeli got a point for track limits and VAR’s Juan Manuel Correa was handed four for two crashes.

Drugovich totalled three points across the season, one for impeding during Barcelona qualifying and the other two for setting his fastest lap in Monza qualifying while yellow flags were out. That also earned him a five-place grid penalty.