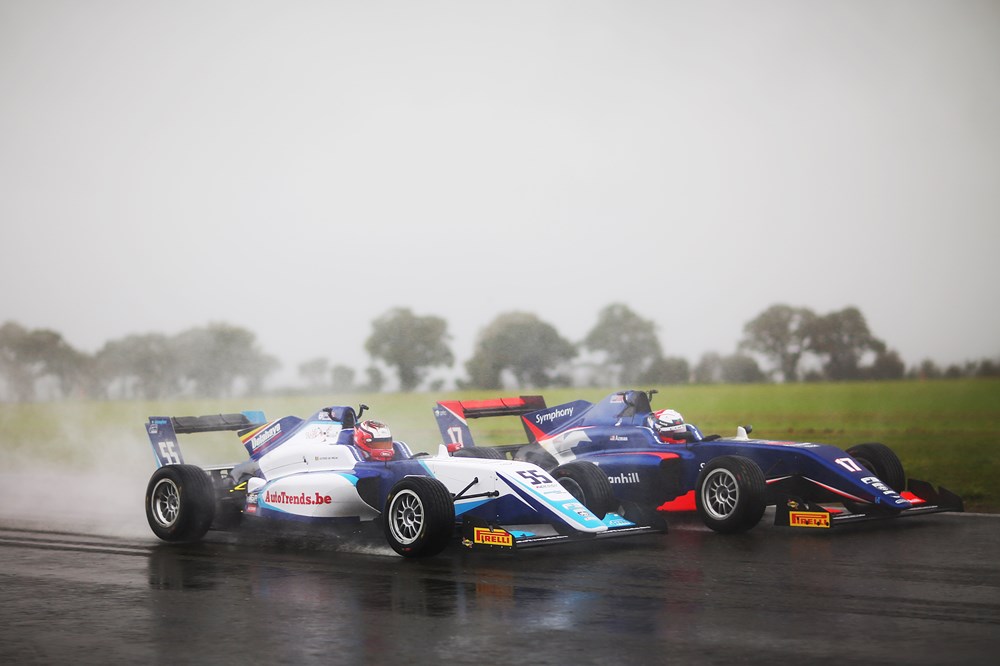 De Pauw started second on the grid alongside Sunday morning’s winner Louis Foster. The grid was determined by the two fastest laps set in the second race held on Saturday, which was the least wet of of a rain-hit weekend.

The 20-minute Sunday afternoon race started behind the safety car for two laps, and Foster’s lead was shortlived when action began as he skidded off at the Justin Wilson Hairpin and dropped to seventh.

This left De Pauw and race one winner Frederick out front, and the pair quickly established a sizeable gap to championship leader Kush Maini in third.

Frederick kept within a couple of seconds of De Pauw but could not challenge for the win.

His Carlin team-mate Nazim Azman started seventh but came out on top of a good scrap for the final podium place, one of several drivers to make their way past Hitech GP driver Maini through the race after a strong opening lap that helped him move up a few positions.

Hillspeed’s Oliver Clarke tried to snatch third place off him while also interlocked in a battle with Foster, and they finished right behind Azman.

Chris Dittmann Racing’s Josh Skelton was initially in the podium scrap, but a few trips to the grass meant he had to settle for sixth.

Maini finished half a minute behind De Pauw and Frederick in seventh, and has had his points lead slashed by the latter.

Lanan Racing’s Piers Prior ended up eighth, and his team-mate Bart Horsten prevailed in a late battle with Hitech’s Reece Ushijima for ninth.

The third Lanan-run car, driven by Joshua Mason, was the only retirement during the nine-lap race after going off track early on.