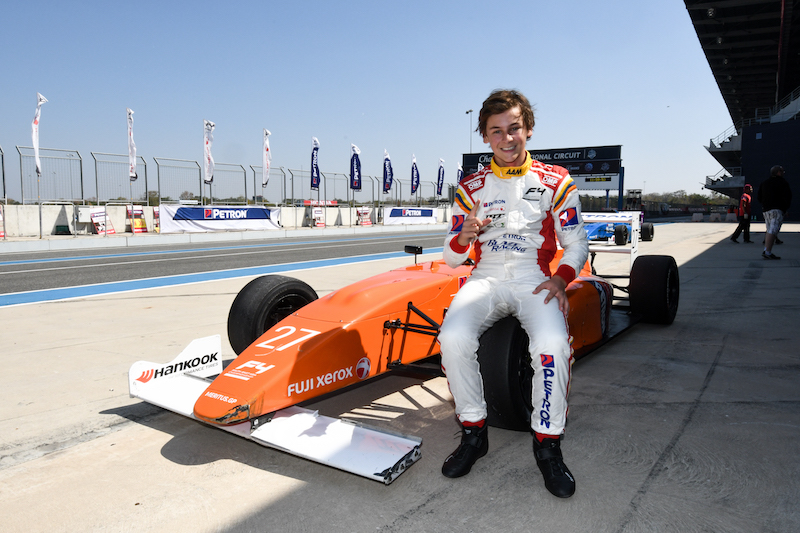 The Belgian, who finished 12th in French F4 last year, is still attempting to get a budget together for his main 2018 programme and is contesting the final two rounds of F4 SEA to get mileage.

He started off in style by taking pole, three tenths up on Kane Shepherd and Daniel Cao, the two drivers who are fighting it out for the 2017-18 title and the only two to have contested every round of the season.

Cao was the strongest of the three in the first race, and he beat Shepherd by almost three seconds. de Wilde finished in third, 12 seconds behind, with Sam Grimes being the only other finisher in fourth.

A lap one incident had eliminated almost half the grid, but Nazim Azman, Cutter Sasakorn and Ben Grimes, the drivers involved, were still able to start the second race.

Fastest lap in the first race meant de Wilde got another crack at starting from pole, but once again he was beaten off the line.

Shepherd was the man in front at first, but by the second lap Cao was once again in the lead. This time Shepherd and de Wilde stuck with him though, and towards the end of the final lap de Wilde made his move on Cao, and took his first win in single-seaters in the process.

Shepherd once again had the strongest start in the third race, with Azman this time providing chase alongside de Wilde.

The race once again went down to the final lap, with them going three-wide through the last corner but with de Wilde coming out on top.

A gap of 0.145 seconds covered the trio, with Cao five seconds back in fourth, only the second time the Chinese has been off the podium this season.

Cao was back up to pace in the fourth race, but once again lost out to de Wilde in a last lap battle, and finished a tenth behind the Belgian.

Azman finished an impressive third, spending the latter half of the race defending from Sasakorn, despite his front wing having mostly detached itself.

de Wilde won for a fourth time in the penultimate race of the weekend, with a late move on Cao securing him victory again. Cao also lost out to Azman, but finished ahead of Sasakorn and Shepherd.

The Grimes brothers collided into each other early in the race, resulting in a safety car. Sam retired on the spot, while Ben made it to the finish but was handed a 60 second penalty for unsafe driving.

After coming close several times, Azman finally took his second win of the season in the final race of the weekend.

He had to battle past Cao to take the lead, but once ahead was untouchable, putting six seconds between himself and Cao until a safety car period caused by a collision between de Wilde and Sakasorn bunched the field back together.

Azman had a easy run to victory after the restart, with Cao holding off title rival Shepherd and the two Grimes brothers.

Cao carries a 117 point lead over Shepherd going into the final round of the season at Sepang, with 159 available over the remaining six races.

Irishman Luke Thompson missed the Buriram round having withdrawn shortly before the weekend.