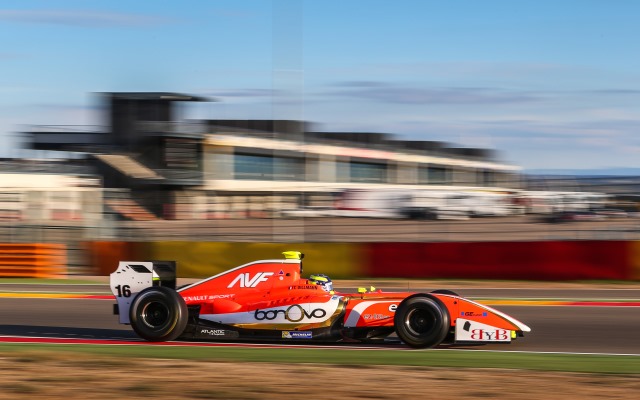 Single-seater veteran Tom Dillmann will contest a second season in the renamed Formula 3.5 V8 series after signing a deal to race for AVF in 2016.

The 26-year-old, who finished seventh in the 2015 season driving for Carlin, joined AVF for last week’s post-season test at Aragon and set the pace in three out of four sessions across Thursday and Friday.

The Frenchman was recruited to be an experienced driver for rookie Sean Gelael at Carlin this year and will almost certainly perform a similar role at AVF alongside Alfonso Celis.

Celis raced for the Adrian Valles-owned team in 2015, finishing 16th in the standings. The 19-year-old Mexican and his new team-mate are the first two drivers to have seats confirmed for the 2016 F3.5V8 season.

?I thank Adrian Valles for providing me with this great opportunity,” said Dillmann, who recently won on his World Endurance Championship debut in the LMP2 class for Signatech-Alpine.

“After the test we had together at Alcaniz, I’m sure we will be able to enjoy a successful season.

“The car is one of the best in the business, it’s really quick and thrilling and I think I still have some unfinished business in single-seaters.

“I never managed to be in the right place at the right time, but with AVF I feel I’m in the right position to score the results my abilities can do and reverse my fortune.”

Valles commented: ?I am really happy to rely on a skilled, quick and experienced driver like Tom Dillmann.

“In the recent round of testing at Alcaniz he did a great job, we had a good time with him and he appreciated our work method, so we quickly found an agreement for the next season.

“Together with Celis, who grew up consistently race after race in 2015,? I think Tom will form a great line-up that will allow us to aim for the top in every single race.”

AVF has raced in the series since 2013, scoring a single podium in its maiden season with Dillmann’s compatriot Arthur Pic.

Pedro Piquet to return to Toyota Racing Series for 2016 edition