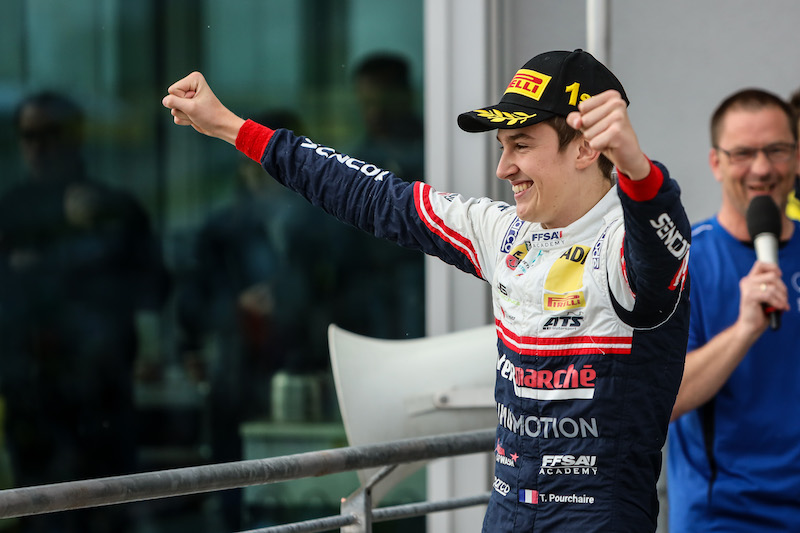 The 16-year-old was the French OK-Junior karting champion and eighth in the CIK-FIA European championship for OK karts before graduating to cars last year, when he was French F4 Junior champion after winning Trophee Winfield.

He switched to ADAC F4 this year as part of a four-car US Racing line-up consisting of members of the Sauber Junior Team, picking up his first win in the second round at the Red Bull Ring and then leading the points through to the season finale.

Further wins included dominating in the wet at the Nurburgring and a crucial victory in the penultimate race of the season at Sachsenring, which coupled with two second places that weekend meant he beat Red Bull junior Dennis Hauger to the title.

?This is a new challenge for me and I?m grateful to ART Grand Prix for giving me the opportunity to race in Formula 3,” Pourchaire said.

“Coming from German F4, this is a big step up, but after the post-season tests in Valencia, I feel ready to take it. We had all the possible conditions, dry, drying or wet and I felt good in all of them.”

Pourchaire drove for Carlin for the first day of FIA F3’s post-season Valencia Ricardo Tormo test, before completing the test with ART. On the second day he was seventh fastest, less than half a second off pacesetting team-mate Christian Lundgaard.

“I still have a lot to learn, but with a team such as ART Grand Prix, I think I can make it. I?m young and I want to take the time to do things right.”

“Theo?s record and career speak for themselves,” ART team boss Sebastien Philippe said. “In karting as in motorsport, he won one title per year.

“Reaching this level of competition, F3, at such a young age, is rare and not only testifies to his great racing skills but also to his exceptional mental ability to know how to manage the victory on a race meeting and throughout a championship, all while working hand in hand with his team.

“At 16, and despite immense raw talent, he has a lot of room for improvement.

“Theo proved to us in Valencia that he is very mature for his age, that he already has a certain technical background and that he has all the skills to be fast and help ART GP reach its objectives.”