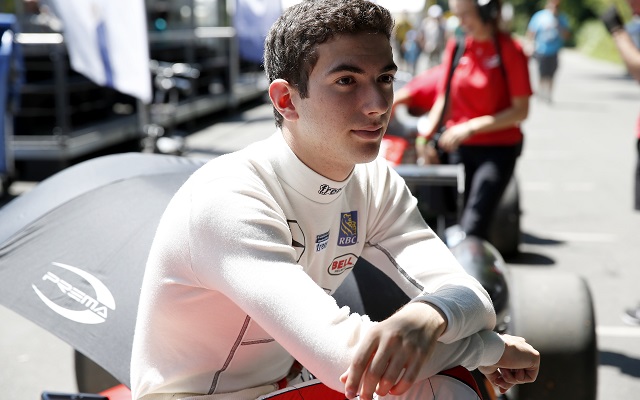 The FIA F3 regular will race alongside the team’s full-time driver Marco Sorensen and will be the second newcomer to make his FR3.5 debut with Tech 1 in 2014 after the team fielded Mexican Alfonso Celis, Jr. at the Nurburgring back in July.

Latifi, 19, is in his third full-time year in single-seaters, racing for Prema Powerteam in European F3, where he sits tenth in the overall standings with one podium from the season opener at Silverstone.

He made his debut on the European single-seater scene in the now-defunct Italian F3 back in 2012 and finished seventh, securing a sole victory at Vallelunga.

In 2013, he raced in the newly-established FIA European F3 series with Carlin, taking 15th in the standings with a best finish of fifth. He then made the switch to Prema amidst a successful stint in the Ferrari-run Florida Winter Series where he won four of the 12 races.

“We?re delighted to welcome Nicholas Latifi to our team,” stated Tech 1 team manager Simon Abadie. “Nicholas won?t have much time to find his feet in the car and get used to the DRS, starting procedures and pit stops, but we?ve got every confidence in his ability to learn quickly. He?ll take advantage of every second to gain experience.”

Tech 1 have endured a trying year in Formula Renault 3.5 and currently sit 11th in the teams’ standings, having finished fifth last season. The French squad ran just one car for the first five rounds of the campaign and picked up their sole podium finish of the campaign in Monaco.