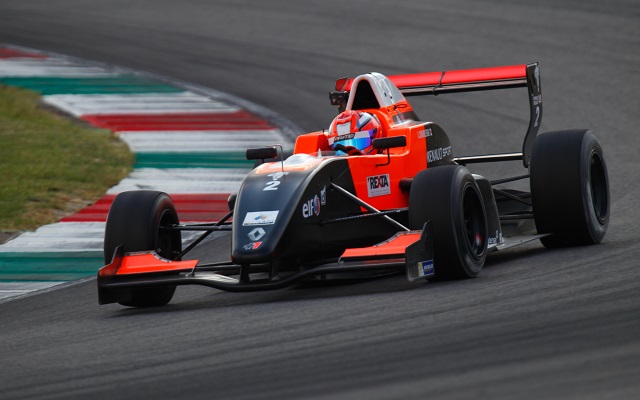 Chudleigh, 18, graduated karting in 2012 and made his car racing debut with Tech 1 in Alps this year. He finished the season in 24th overall, with a best finish of seventh.

“I’m thrilled to be back racing in Europe in 2014,” stated Chudleigh. ?”Tech 1 Racing is the perfect environment for me to continue my open-wheel racing education and, with a year together to our credit, I’m confident we can enjoy a strong campaign.”? ”

The Canadian is mentored by countryman, Formula Renault 3.5 2011 champion and DTM race winner Robert Wickens. Commenting on his protege’s confirmed sophomore campaign campaign in Alps, he said: “I think a second season in Formula Renault 2.0 Alps will be of real value to Luke as he continues to learn the ultra competitive European style of open-wheel racing. He’s with a great team, he’s proved he’s willing to make sacrifices to compete overseas and he’s shown a lot of progress having gone in at the deep end last season against drivers with far more experience. I’m looking forward to seeing him back behind the wheel in 2014”.

Tech 1 Racing, the reigning Formula Renault 2.0 Eurocup champions, took third in the 2013 season of Alps, lining up behind the two Prema outfits.

“We’re delighted to have Luke returning as our lead driver in the ALPS series,” stated Tech 1 manager Simon Abadie. ?”He made a bold step last year by relocating full-time to France to compete with us but that investment started to pay off. ?With a season under his belt, we head into the 2014 championship confident Luke will be a consistent front-runner.”