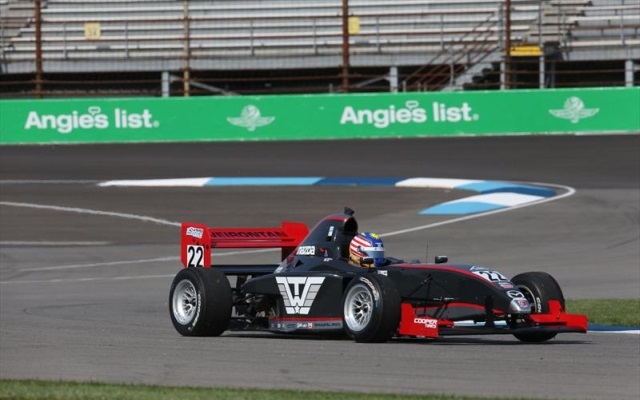 Andretti’s Weiron Tan took his second victory of the 2015 Pro Mazda season after winning in a caution-heavy race at Indianapolis Speedway.

The race has been held to make up for the cancelled NOLA Park race, which the organizers had to call off due to heavy rain.

As such, Tan started from pole but the race was almost immediately yellow-flagged after Florian Latorre‘s car rolled over at turn one.

Tan had to defend from Timothe Buret after the restart but he held on until the second caution stint, which was caused by a collision between Dalton Kellett and Kyle Connery.

This time around Tan’s getaway was perfect and Buret had to look over his shoulders instead to fend off Neil Alberico‘s charges.

While the Frenchman initially the championship leader, he started to rapidly close in on Tan but yet another caution interrupted the race.

There was only one lap left after the restart which Tan controlled to secure the win. Buret collected his third podium in the past four races while Alberico completed the podium.

Santiago Urrutia lost eight positions at the start but swiftly recovered to claim fourth, ahead of Garret Grist, who passed Patricio O’Ward on the final lap.

Last year’s runner-up Scott Hargrove, who has returned to Pro Mazda for a one-off weekend, took seventh after starting 16th. He was followed by Will Owen, Daniel Burkett and Victor Franzoni, who has made a surprise mid-season move from USF2000 to Pro Mazda.

Hilmer returns for Barcelona with Yelloly and Cecotto