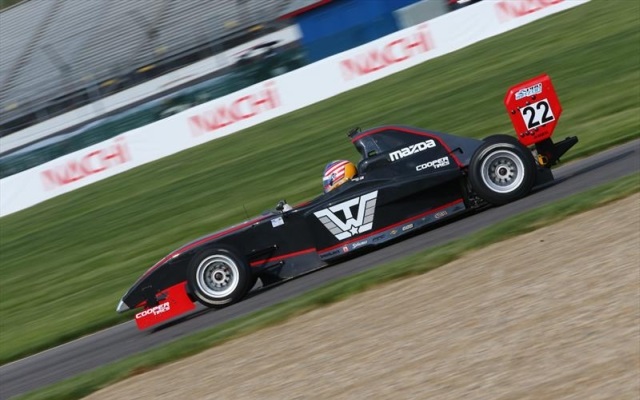 Weiron Tan?became the Pro Mazda race winner at the Lucas Oil Raceway round, leading every lap of his maiden oval race.

Having started from pole, Tan established a safe lead in the beginning, while his Andretti teammate Dalton Kellett dropped down from second to seventh at the start.

The Canadian’s race went from bad to worse after being involved in a collision with Raoul Owens and Timothe Buret, causing all of them to retire.

It also triggered a caution stint but that did not disturb Tan as the Malaysian mastered the restart and was soon back in a confident lead ahead of Will Owen.

A battle emerged from third between Florian Latorre and Neil Alberico, the latter eventually getting past the Frenchman whose car lost grip in the final stages.

Although Owen closed the gap to less than a second for the last lap in an attempt to take the lead, it was Tan who ended up victorious. Unable to make up further ground due to his fight with Latorre, Alberico completed the podium.

Juncos duo Garett Grist and Jose Gutierrez had another duel for fourth at the end, with the former ultimately holding onto his position.

M1’s Victor Franzoni secured sixth ahead of the sole Team Pelfrey finisher Patricio O’Ward and Latorre who had to do with eighth.

The order has been rounded out by Daniel Burkett and World Speed Motorsport duo Alessandro Latif and Bobby Eberle.

Championship leader Santiago Urrutia?suffered his first retirement of the season, as his race ended prematurely due to technical problems.