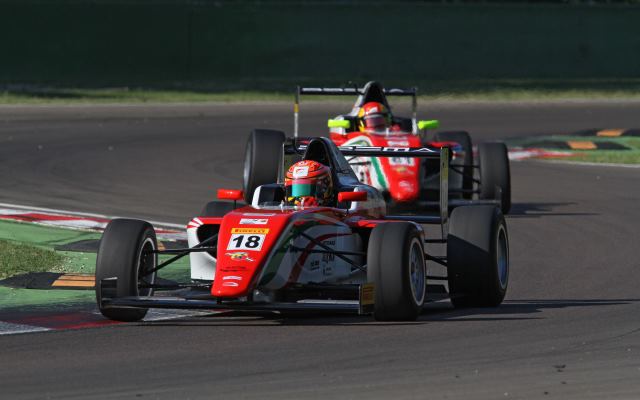 Ferrari Driver Academy member Lance Stroll took a close victory in race one of the second round of the Italian F4 season at Imola.

The 15-year-old Canadian was harried all the way to the checkered flag by teammate Brandon Maisano, with the duo exchanging fastest laps for the most part of the race. The gap between the two Prema drivers rarely exceeded a second, but Maisano had to settle for second ultimately.

Behind them it was all to play for. Ivan Matveev, who started third, lost many places after an off-track excursion and the Russian driver finished down in 13th place. Diegi’s Andrea Russo got a good start and was third by lap two, but was not able to make any impression on the Premas, finishing over 16 seconds behind the race leader.

Leonardo Pulcini took fourth ahead of Malta Racing driver Keith Camilleri in a strong fifth place, holding off a late charge from Jenzer’s Alain Valente, who passed Camilleri’s teammate Zack Dante after being stuck behind him for most of the race.

Mattia Drudi recovered from an early spin at Variante Alta which dropped him to 20th, to finish in eighth place, passing Prema’s Takashi Kasai on the last lap of the race. Kasai took ninth, ahead of DAV Racing’s Brazilian driver Gustavo Bandeira,?who starts on reverse grid pole for race 2 on Sunday.

Russo was given a two-second time penalty?post-race for setting a best sector time?under yellow flags. This meant that Pulcini took the final podium spot in third, while Russo was demoted to fourth.

*After a two-second penalty