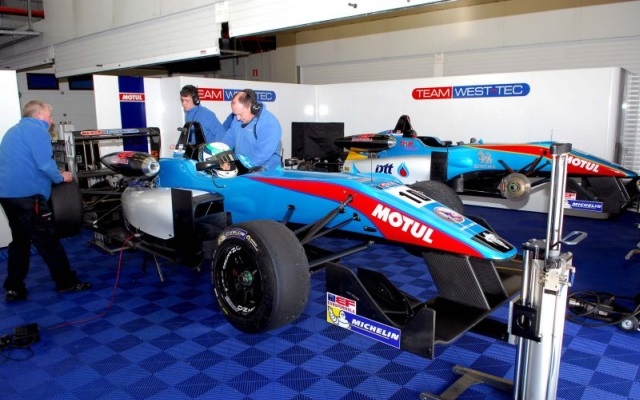 West-Tec driver Yarin Stern was fastest in the final day of the 2015 Euroformula Open Winter Series, which in total spanned 22 practice sessions, one qualifying and two races.

Stern, who gearing up for a third season in the main championship, recorded his fastest lap in the first practice which proved to be unbeatable over the rest of the day at Catalunya.

Russian driver Konstantin Tereshchenko and Stern’s teammate Tanart Sathienthirakul completed the overall top three, while Yu Kanamaru was only fourth fastest this time, despite dominating most of the Winter Series. The best rookie of the day was Brazilian newcomer Vitor Baptista in fifth.

The morning session was dominated by the West-Tec duo of Stern and Sathienthirakul with only Tereshchenko coming within half a second of the two. Japanese Kanamaru and Brazilian Vitor Baptista completed the top five.

Stern retained the lead in the second practice, which was a much closer affair, with the top five was separated by less than three tenths.?Russian sophomore driver Dzhon Simonyan was second fastest, closely followed by the best rookie of the session Igor Walilko, Sathienthirakul and Italian Damiano Fioravanti.

Polish ADAC Formel Masters graduate Walilko then found himself on top in the third session of the day as he beat Tereshchenko by just 0.06s. Kanamaru and Sathienthirakul maintained their consistent frontrunner pace in third and fourth respectively as the fifth place was one again occupied by RP’s Fioravanti.

The fourth and final outing of the day saw Tereshchenko take first with Kanamaru and Sathienthirakul closely following the Russian. Stern returned to the top five in fourth while Vitor Baptista ended the day in fifth.

With the Winter Series officially over, Euroformula Open action will resume on the 11th and 12th of April at Jerez, which will host first round of the regular season.