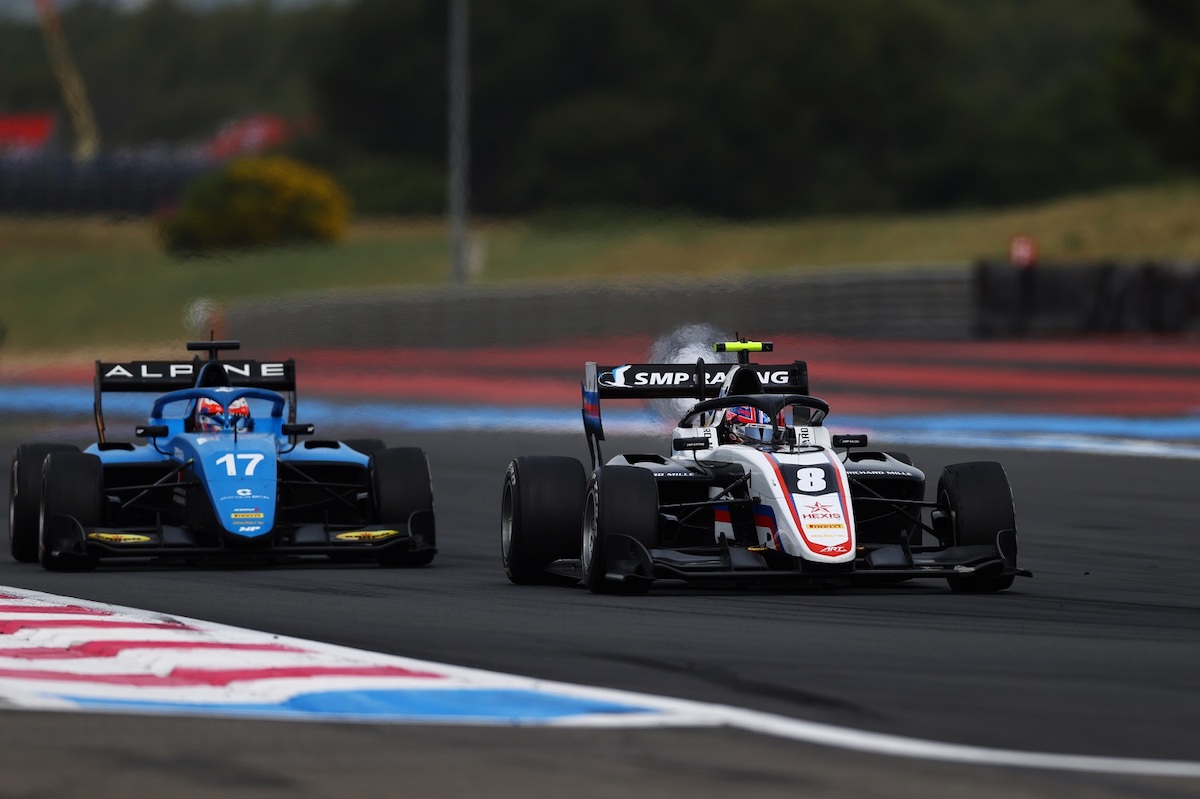 Alexander Smolyar and Victor Martins are unsure whether they can charge from mid-pack for a second reversed-grid FIA Formula 3 race at Paul Ricard.

ART Grand Prix driver Smolyar won the weekend’s first race from sixth on the grid to take his second victory in FIA F3, while MP Motorsport’s Alpine junior Martins climbed from 10th to finish second in a race that featured a total of five different leaders.

On top of that, Prema Racing’s Arthur Leclerc climbed 18 places to secure the reversed-grid pole for the second Saturday race, which will feature Smolyar and Martins starting from 12th and 11th respectively – the Frenchman one spot lower than his starting spot on Saturday morning.

When asked by Formula Scout in the post-race press conference, the pair offered their thoughts on whether they can challenge at the front in race two.

“That’s a good question,” Martins replied. “After qualifying yesterday, we all had the question: will the race be interesting to watch, or will there be a lot of overtakes? And now today we clearly saw that it’s really possible to come back from behind.

“So, on my side, I just want to do the same: Stay focused on my job and do a good job and see if there are opportunities. If you see an opportunity and you go for it, you get the overtake done and then you think about the other one. So, it’s just how the drivers will react.

“It’s reverse grid again, so maybe there will be some slower drivers in front and faster ones at the back. It will be a bit of a mix, I think, because I saw some guys who were fast in qualifying, they finished P9 or P10 so they will start in front, so we will see. But I hope it will be again as in race one.”

Smolyar added that it remains unclear how the race is set to pan out.

“It’s hard to say but it depends on the wind first,” he said.

“In Barcelona in race two, it was quite chaotic. And the first thing, you don’t need to risk because everyone will start to risk and then you might gain places out of nothing. But, at the same time, other drivers might think the same.

“So, it really will depend on who will start to risk and who will not. But for sure, I don’t think qualifying is representative of what is going to happen in the races because we’ve seen as Victor said, even though you did a good lap in qualifying, it doesn’t mean you’re going to be quick in the race. We’ll see how it goes, I hope it will be as fun as the first race.”