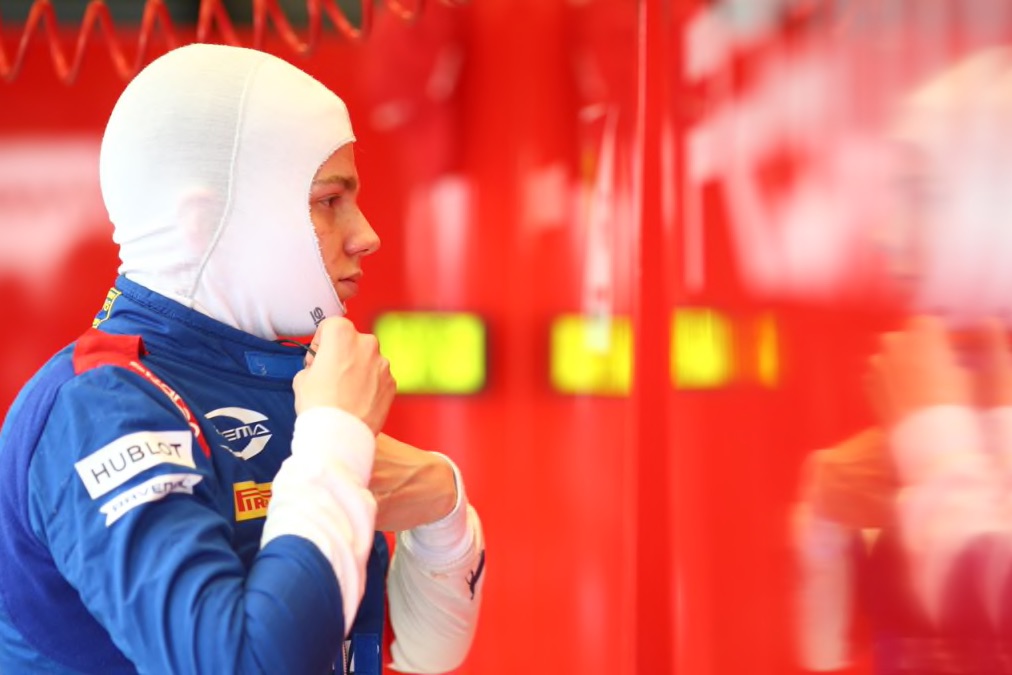 Prema’s Robert Shwartzman has spoken about the incident with team-mate Mick Schumacher at the conclusion of last weekend’s Formula 2 race at Silverstone and how he aims to bounce back from it.

The two Ferrari juniors collided towards the end of the sprint race at Silverstone, with Shwartzman dropping down the order and Schumacher afllimg behind Red Bull-backed Yuki Tsunoda, giving the Carlin driver his first F2 win.

It ended a miserable time for Shwartzman at Silverstone, as he picked up just four points from the four races there as he lost the championship lead to fellow FDA stablemate Callum Ilott.

Shwartzman was asked about the incident in the press conference after qualifying a personal-best second place at Barcelona.

“It’s always sad and hard to lose a victory,” he explained. “Obviously, we’re all racing to be the best and to be first. And when you have three laps to the end and you just lose basically everything, not just the win but also important points in the championship, it’s a hard feeling.

“For sure it was difficult, but in my life it wasn’t the hardest thing that I’ve lost. So we’re learning from it, we get stronger and I sort of put that disappointment and that pain into a strength and I try to become stronger and wiser for the future.

“[Mick and I] had our own discussion. We talked together, we had a chat and all the negative things we left at Silverstone. It’s behind our shoulders and we came here positive to Barcelona, so everything is quite okay.”

Shwartzman also went into detail about his qualifying form this season, having not qualified in the top five prior to this weekend despite winning two feature races already in 2020.

“If we go race by race, I think the first two races in Austria, I was just getting used to the car,” he explained.

“We didn’t have much testing , we just had three days in Bahrain, which to me was not enough especially for the qualifying preparation. Second Austria was getting a bit better, and then at the Hungaroring with the weather conditions we sort of messed up. I also didn’t get used to how the car was feeling in the wet conditions in quali.

“At Silverstone the first weekend was just a nightmare. Everything just went wrong. Everything that was possible to go wrong, like with traffic and everything was just getting out of hand. The second race weekend at Silverstone was better but we didn’t get into that right window to do a good result in qualifying.

“Here finally we took a different approach – we took it a bit easier, to have more or less a good position on the track. Also I’m feeling really comfortable on this track, I like it a lot. And the car just felt really good and here I just managed to put everything together and in the end, it was just quite a good result.”