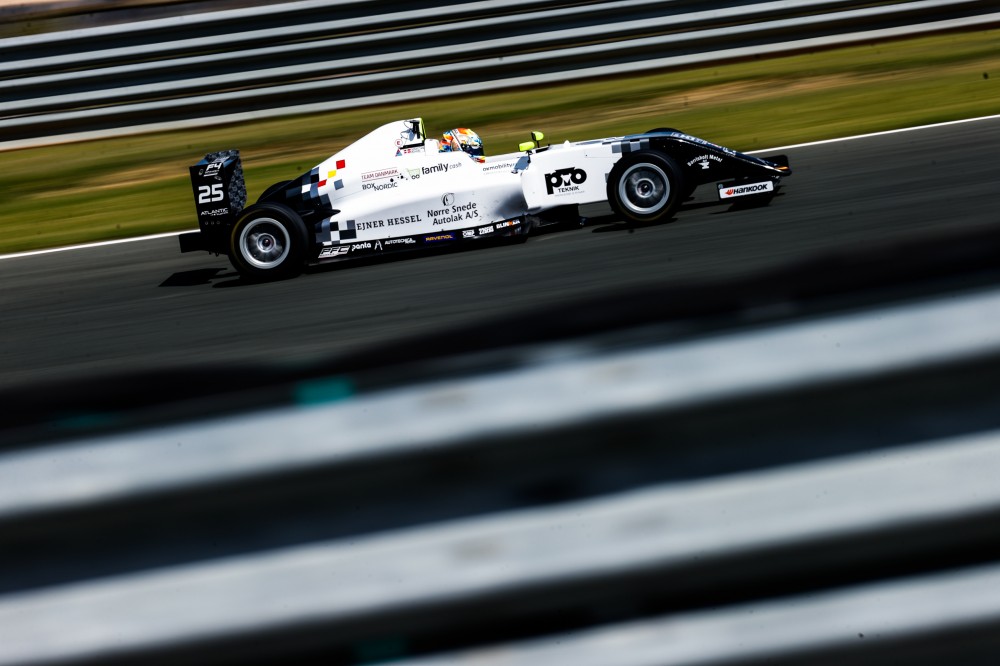 Campos Racing claimed its first win in Formula 4 courtesy of Sebastian Ogaard in a Spanish championship race at Algarve.

The team lost its eponmyous founder Adrian Campos over winter as it announced its intention to step into F4 after decades campaigning primarily in Formula Renault and Formula 3. It joined the Spanish F4 championship in 2021 with four cars.

It was MP Motorsport’s Dilano van’t Hoff who claimed pole for Friday afternoon’s race, but the Dutchman stalled and dropped to the bottom of the top 10 and this put Ogaard into an immediate lead for Campos ahead of MP’s Rik Koen.

Ogaard immediately stretched his legs and then controlled his pace up front, while Koen – who cleared Ogaard’s team-mate Pepe Marti at turn two on the opening lap – was initially comfortable in second place before a queue of cars came for him.

Praga F4 duo Daniel Macia and Quique Bordas passed Marti on lap three of 16, but he got back past Bordas a few laps later as a bigger battle started to emerge.

Pinnacle Motorsport’s Alex Dunne and Global Racing Service’s Vladislav Ryabov got involved before Ryabov fell down the order, then the recovering van’t Hoff cleared team-mate Manuel Esperito Santo for seventh at mid-distance to also join in.

Macia finally passed Koen for second at turn two on lap 10, and Bordas cleared Marti then also got ahead of Koen at the downhill turn five hairpin. Marti tried Koen at turn 10, but they clashed and then headed to the pits to retire.

At this point the battling got crazier, with Dunne dropping spots while several of the Drivex School drivers rose up the order.

Van’t Hoff ended up taking third from Bordas with one lap to go, but he was 14 seconds behind winner Ogaard and seven behind runner-up Macia. His closest title rivals are now Macia, Ogaard and Bordas who are level on points behind him.