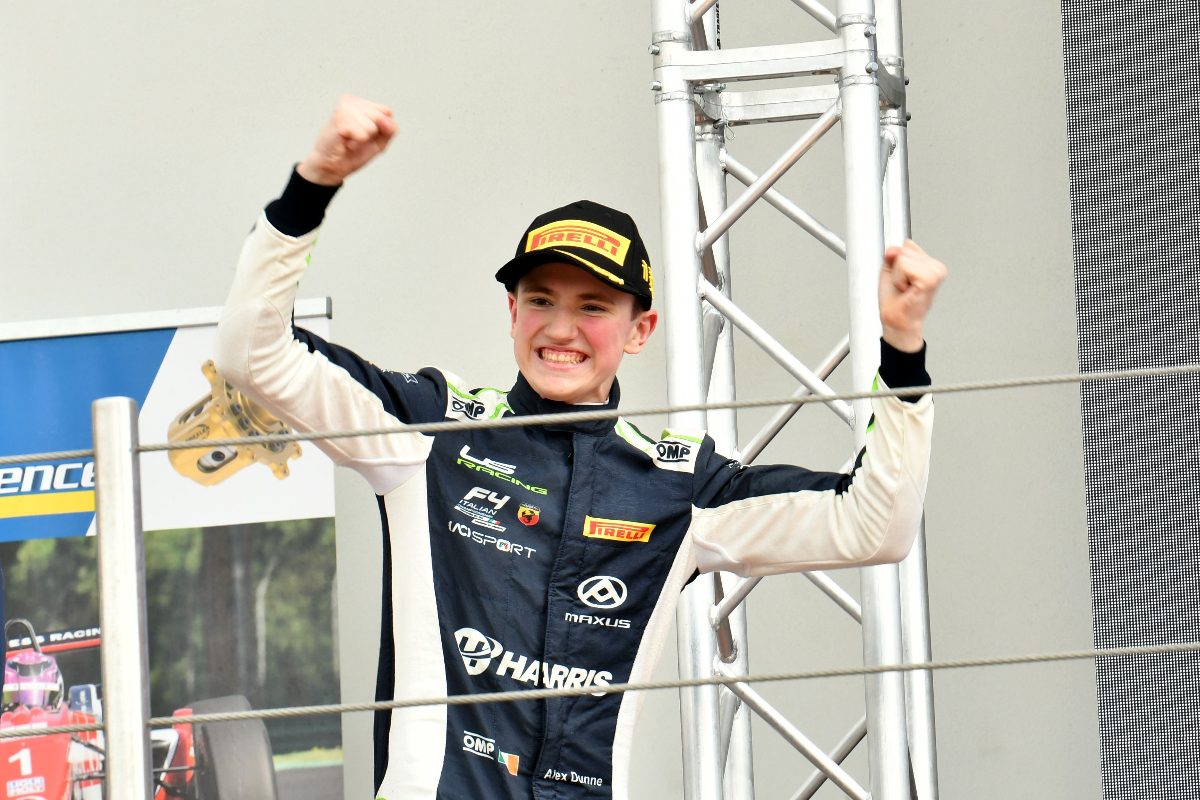 After racing part-time in his rookie single-seater season in 2021, Alex Dunne committed to three F4 series this year and has won in all three. He joins Ida Wood in the latest Formula Scout Podcast episode

At the time of Formula Scout’s interview with Alex Dunne, the Irishman was the points leader in both the British and Italian Formula 4 championships. Winning form both in a British series and one of the European mainland at the same time is rare, with Lando Norris one previous example when he juggled a title-winning Formula Renault Eurocup campaign with a win-filled part-time run in BRDC British Formula 3.

Dunne almost has the luxury of not having to prioritise one series over the other, but is denied that by British F4’s finale at Brands Hatch clashing with Italian F4’s Monza round. And it looks like Dunne is going to be fighting for the title in both.

His 2022 actually started in another F4 series though, as he got his first taste of the new Tatuus T-421 car in the five-week F4 United Arab Emirates season. There he drove for Hitech GP, and his results – two victories and sixth in the standings – combined with his integration into the team led to a deal being put on the table for him to also join Hitech in British F4.

Dunne had already committed to racing in Italy with German team US Racing, after a similar story of joining the team for a short amount of time and then securing a full-time 2022 deal off the back of it. In this case he had contested three ADAC F4 rounds with the squad in 2021, taking two poles and two second places from eight races to come eighth in the standings.

“It’s a little bit surreal [to be at the front of two championships in 2022], but I think throughout my karting career and kind of through the start of my car career, I knew that the talent was there and I knew it was possible, it was just about kind of getting a few things out of the way,” Dunne says to Formula Scout.

“Throughout karting we always had a bit of bad luck, and I think now that that’s gone and everything’s starting to come together, then the results are starting to show. 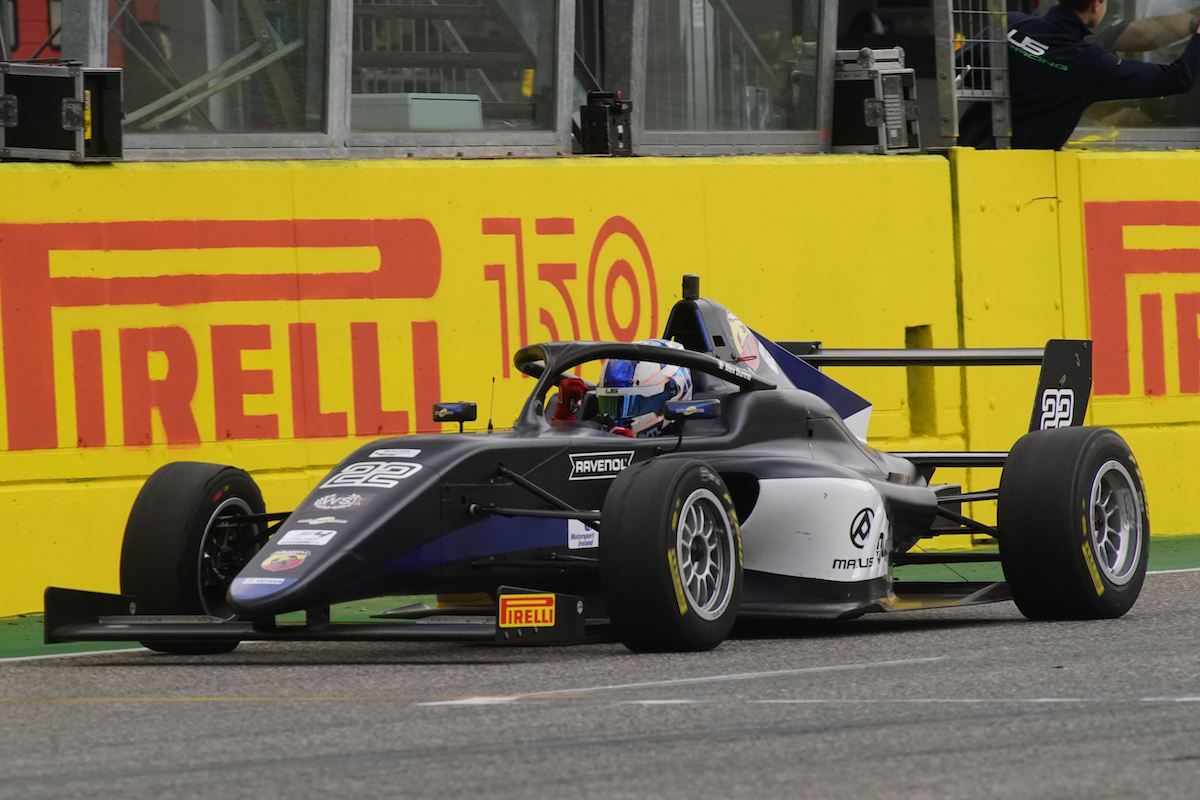 “Having a five-week prep championship for the start of the season [in the UAE] is an opportunity you don’t really miss, so we agreed to go over and do that with [Hitech].”

Dunne’s budget initially only extended to Italian F4, with no ADAC appearances planned, but he then found sponsorship to add his UAE and then British programmes. He knows Britain and Italy well, having switched his karting career to one and then the other to find greater competition (according to his father, manager and multiple-time Irish Formula Ford champion and 2006 FFord Festival Kent winner Noel Dunne) as “the motorsport scene in Ireland is quite small” and “it’s kind of more fun racing than really competitive like you get [abroad]”. His name quickly became established in both, but the headline results were not as common as would have been expected given how Dunne’s reputation grew in karting.

“I think in karting I kind of underachieved the potential I had. There was a couple of times where either we had bad luck or me being slightly inexperienced I made a silly mistake. We always had the pace and we were always around the front, or there or thereabouts if not at the front. We always had the pace, but I think I slightly underachieved to what I would have liked to have done.”

He adds: “I think making the jump like I did when I first started to either karting in the UK or karting in Europe, it’s probably the best option for somebody young trying to go up the ladder [from Ireland].”

Dunner Sr reinforces that “karting, as much as we wanted to win, was about his learning curve” and “that he learned as much as possible to move him forward [ready for single-seaters]”.

The switch to cars came last year, initially in Spanish F4 with Pinnacle Motorsport and as a junior of Super Formula team KCMG before that ended after three rounds as “things were said [by KCMG] and just didn’t happen really, that’s pretty much it“. But Dunne had a first chance in 2020 as he was runner-up in Ginetta Junior’s scholarship. As he didn’t win, he opted to stay in karts for that year and moved from his factory Tony Kart seat in junior karting up to OK karts with Birel ART and Energy Corse. 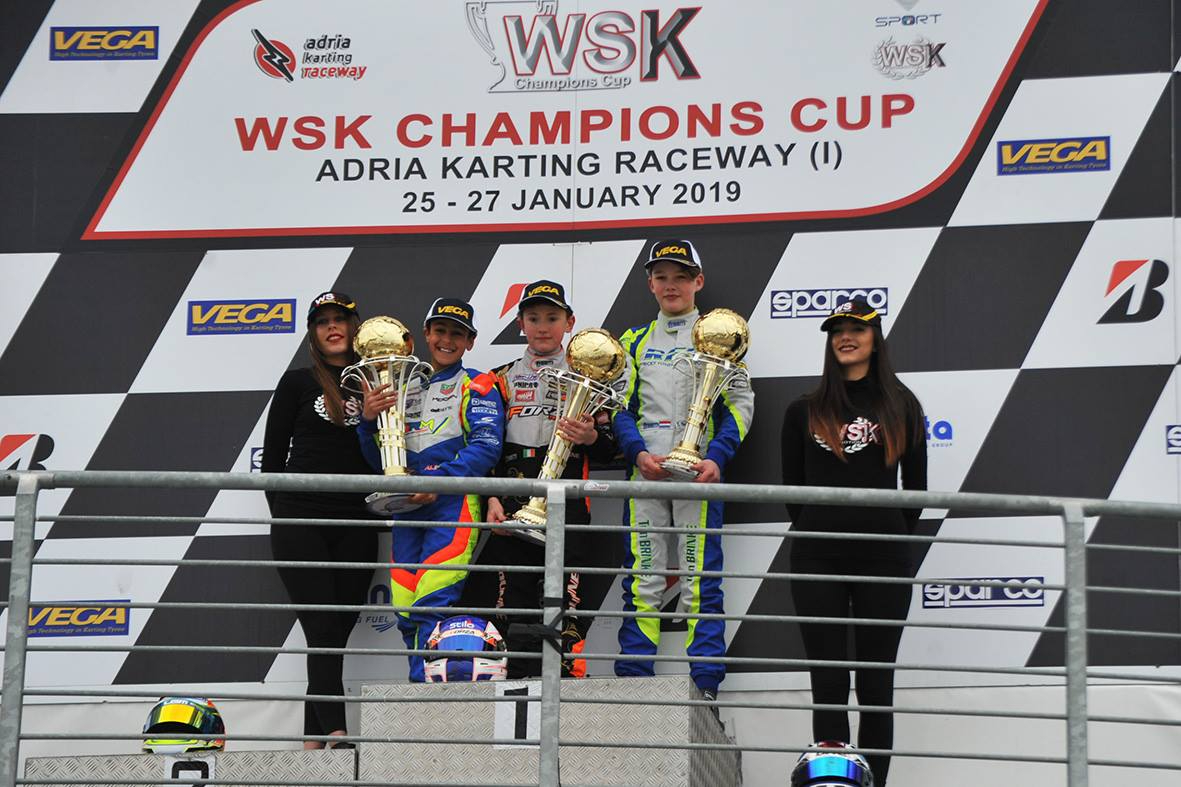 “Being in Tony Kart [factory team] was probably one of the best things we did in karting,” says Dunne. “They’re such a prestigious team and they have so much experience, I learned so much from them. Not only things like set-up of the kart and becoming a better driver, but also stuff to present myself better as a person as well. I really learned a lot from them.”

Similarly, the out-of-car learning with Hitech in the UAE made the idea of British F4 more attractive too and particularly as Dunne was paired up with the exact same crew working on his car. Matt Greasley, who has an incredibly varied engineering career that includes working in Formula 1, Formula 3000, Formula E and most recently IndyCar before he joined Hitech last November, has been Dunne’s engineer for both series.

“I first met him in F4 UAE, which was great. Twenty races over five weeks, so that was mega. He really came on in leaps and bounds there. We were a new team as well, so working together [as] new driver, new team, was the best start to the season.

“He’s wise beyond his years. He studies motorsport, I think, he knows a lot about motorsport and he really understands what he needs to do. You don’t have to worry about that side of things. It’s almost you have to calm him down a little bit, which is always good. The speed’s there, so it’s just you bring him back a bit.”

From Greasley’s extensive experience working with young drivers, how does Dunne compare to previous talents he’s engineered? “He’s one of the top five, I think, from my 25 years of doing this thing.”

On the engineering side, Dunne explains how Hitech is keeping itself at the front after utilising its UAE experience to get up to speed with the T-421 ahead of its UK introduction, while rival teams such as Carlin only saw the car once it was in Britain. 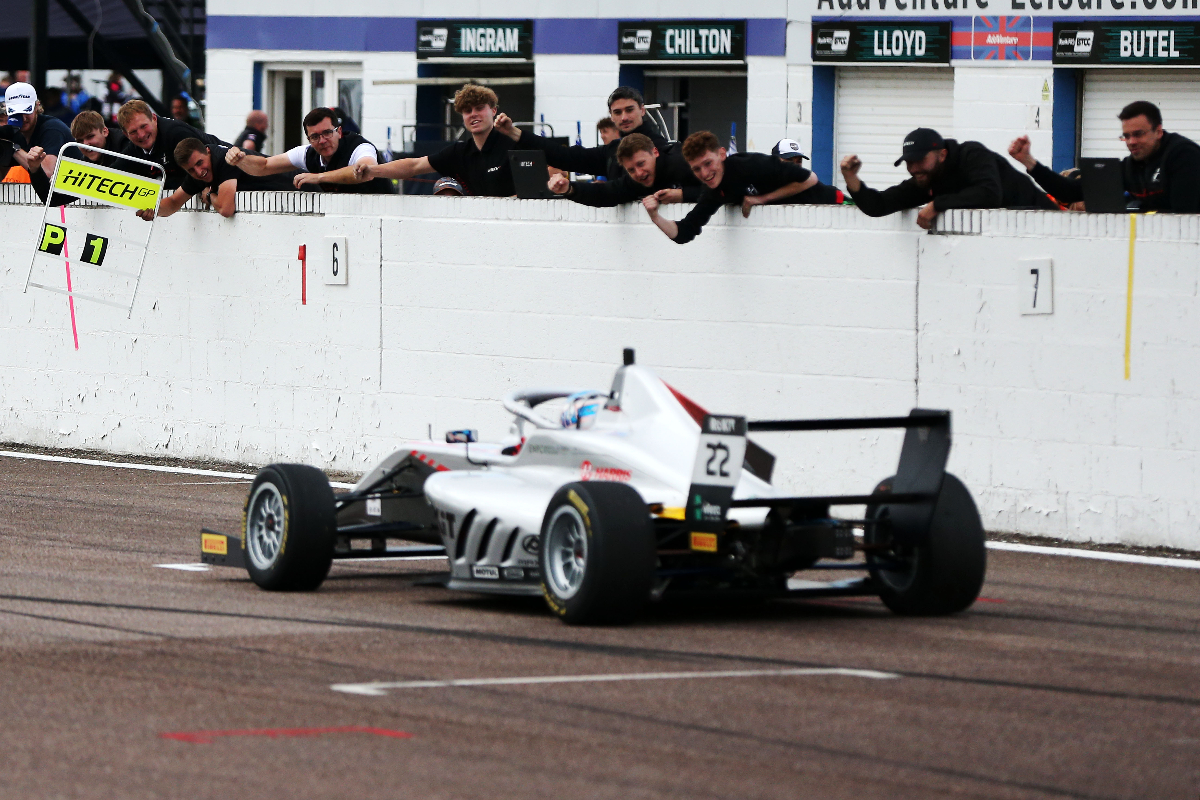 Ugochukwu is one of two F1 juniors in British F4, while Italian F4 is set to have five drivers with F1 affiliation on the grid this year, and Dunne would like to be among that number by the end of 2022.

“The likes of Mercedes or Red Bull or something like that, to try to help me, because I know personally with our family we don’t have the money behind us to go all the way to F1 so I need a little bit of help from someone,” he explains.

While not in F1 (although don’t rule it out in the future), Hitech’s Silverstone headquarters has resources that drivers can use much like an F1 team’s offerings.

“I really enjoy going to the factory working with the team, working on the sim and also working in the gym as well. Helping me be a better driver and getting better physically and mentally as well, which obviously helps in the car. They have a lot of aspects to help me improve, which is really good.

“I haven’t talked to any of the F2 drivers. I’m quite friendly with Isack Hadjar, who’s with Hitech in FIA F3, so I talk to him a little bit trying – he’s a really good driver – to see if I can learn anything.”

The work outside of race weekends has got Dunne feeling “pretty confident” for the remainder of the British season, and his testing pace at Snetterton has got him particularly excited for the round there in August. 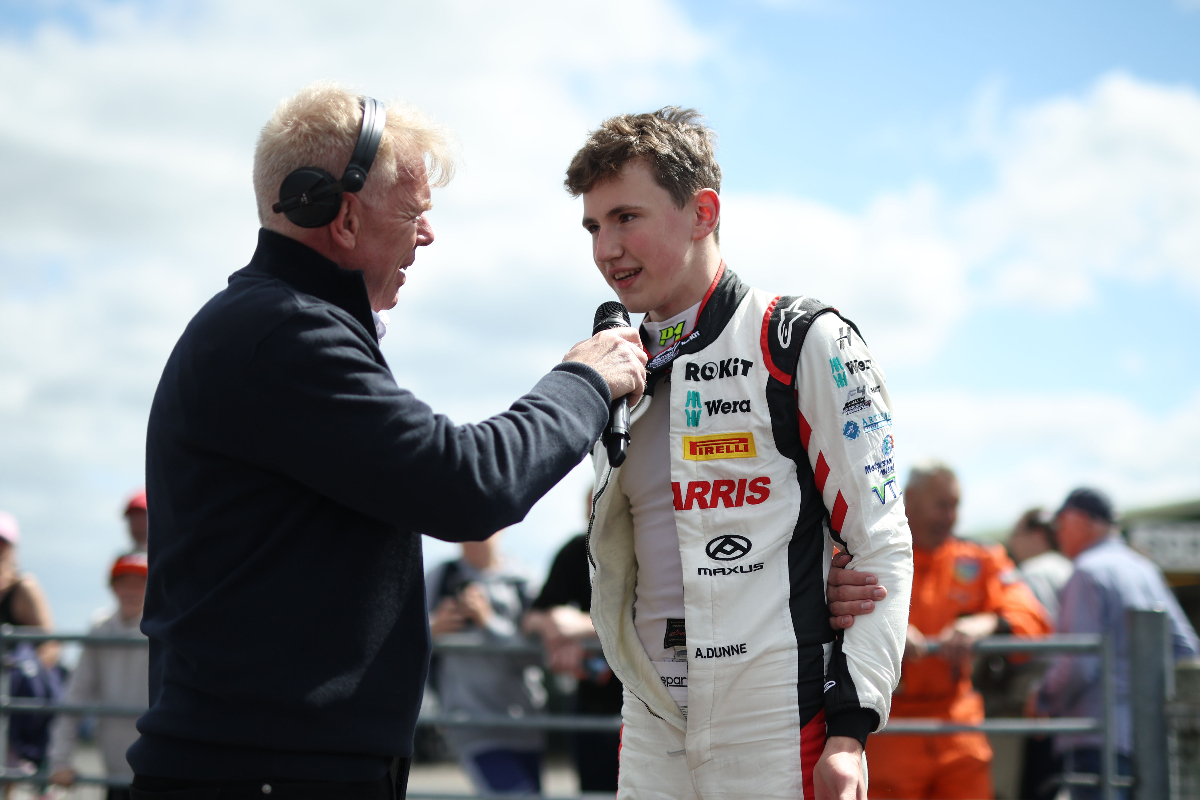 Next up in Italian F4 is Spa-Francorchamps, scene of Dunne’s Spanish F4 debut where he claimed pole and made the podium. Unsurprisingly it’s his favourite track, and he heads there 23 points off the championship lead after misfortune at Misano last weekend. But he can take confidence in having topped a pre-season Spa test which attracted 62 drivers.

“The German way is a little bit more strict, but I enjoy having two different aspects of two different teams,” Dunne shares. “You can put them together and learn as a driver, which I think is really helpful for me. And also the more mileage I get out of the two. I enjoy working with both teams equally. They’re both two very different teams with two different approaches, but in the end it’s the same goal.

“The tracks in the UK are a lot tighter and a lot smaller, so you really have to be a lot more precise. Tracks like Spa for example you have a lot of run-off where if you make a mistake you can go off and come back on. Whereas [in Britain] it’s either you’re on a good lap on track or you’re off and in the wall. So you really have to focus and be precise, so I think that teaches you how to be a better driver when you’re on the limit.”

For 2023, Dunne thinks “Formula Regional Europe is a good choice, but I believe that I have the ability to go straight to FIA F3″. It’s “quite a big jump” as a driver and for budget, but if he can land F1 support it’s where he’s set his sights already.

You can listen to our interview with Dunne below, or find this week’s podcast on Breaker, Google Podcasts, Overcast, Pocket Casts, RadioPublic, Castbox, Apple Podcasts and Spotify.