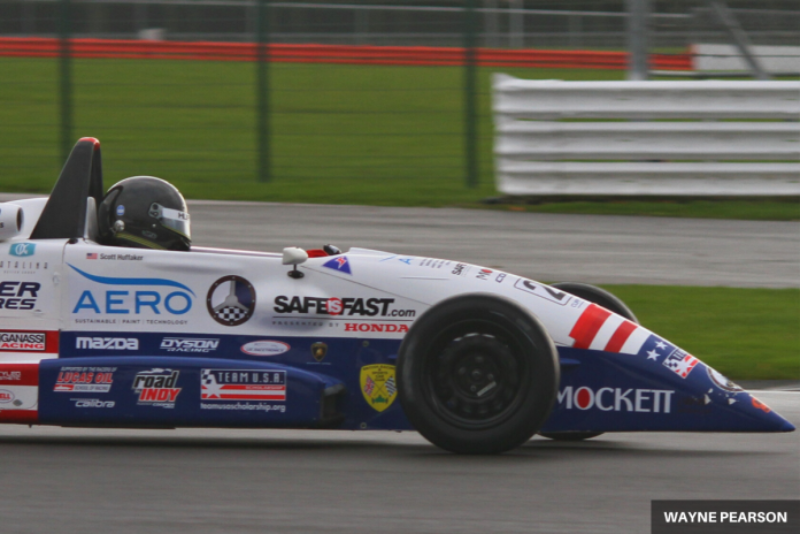 At the start, Foster and Moyers pulled clear of the chasing pack from the front row of the grid and were racing wheel-to-wheel around Silverstone’s still-damp National layout, ending lap two just 0.005 seconds apart.

The pair came to grief at Copse shortly after when Kevin Mills Racing driver Moyers squeezed Foster onto the damper inside line. That caused the Don Hardman Racing driver to slide to the outside and tangle with Moyers.

Suspension damage to both cars caused the pair to retire and consign them to the Progression race on Sunday morning as their only chance of making it to the semi-finals.

Their demise allowed Cliff Dempsey Racing driver Huffaker to breeze into the lead, building up a gap of more than two seconds over Team DDR’s Ivor McCullough at the chequered flag.

Third went the way of Ian Campbell, who fended off a late challenge from Myerscough College’s Jack Wolfenden after the latter progressed from sixth following an opening lap spin.

Miles Griffiths, driving for the familiarly named Hi-Tech Motorsports, took fifth place, 0.248s clear of John Svensson, having been unable to repel the challenge from Wolfenden at mid-distance.

Seventh went the way of James Hadfield (B-M Racing), with Peter Lucas (Souley Motorsport) half-a-second behind as he finished as the best of the Janet Cesar Memorial Trophy class cars in eighth.