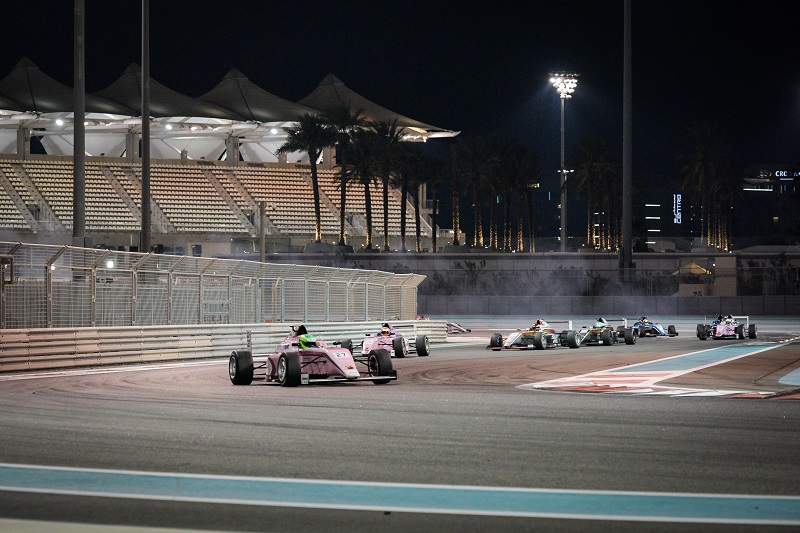 David Schumacher moved into second in the 2017-18 Formula 4 UAE standings after winning two of the four races at Yas Marina, while Nicolas Todt protege Caio Collet took his maiden victory.

In what is only?his second weekend in car racing, Collet took pole position for the opening race, ahead of championship protagonists Charles Weerts and Schumacher.

He was unable to convert pole into victory, as points leader Weerts passed the 15-year-old Brazilian on the first lap and cruised to his third win of the season, beating Collet by 1.914 seconds.

Schumacher, fresh from picking up his first win in Dubai last time out, rounded out the podium positions, with Morrocan karting graduate Sami Taoufik charging from eighth on the grid to fourth place.

Lucas Pettersson, who came into the weekend third in the standings, fell from fourth on the grid to seventh place by the chequered flag, behind championship rival Tom Beckhauser and Lucas Alecco Roy in fifth and sixth place respectively.

Niklas Krutten was eighth on Mucke Motorsport’s championship debut, with Petr Ptacek and?Amaury Cordeel rounding out the points. Cordeel dropped down the order following an incident with rookie William Alatalo, who received a 10-second penalty for causing the collision.

Due to the top-six reverse grid, Roy started on pole position for the second race ahead of Beckhauser.

However, it was Schumacher who led after the second lap, up from fourth on the grid. He led each of the subsequent laps and claimed his second win of the season. Collet was second, with Weerts a comfortable distance behind in third, after Taoufik, who had been running third, was forced to retire with major mechanical woes.

Race three saw Weerts and Schumacher collide, with the former retiring with terminal damage while Schumacher was hit with a 10-second post-race penalty dropping him from second to fifth place.

This left poleman Collet to storm to his first victory of his car racing career, with Taoufik and Alatalo collecting maiden podium finishes. Krutten also benefitted from Schumacher’s penalty, moving up to fourth place.

Petersson collided with Cordeel, breaking the latter’s suspension, but Petersson still came home in sixth place, ahead of Beckhauser, Roy, Toth and Spiridinov.

Schumacher bounced back in style in the final race. He edged Collet by just 0.871s, the Brazilian smashing the fastest lap on each of the final three laps, but unable to find a way past Schumacher.

Polesitter Petersson collided with his team-mate Taoufik on the opening lap and finished one lap down in 12th place.

Alatalo made it two podiums from two races with another third-place finish but was only just ahead of Weerts and Cordeel. Also in the points were?Ptacek, Krutten, Taoufik, Beckhauser and Roy.

With just two events to go, Schumacher has leapt from fourth to second in the drivers’ championship and is within 15 points of leader Weerts. Collet is up to fifth after scoring more points than any other drivers at the series’ third visit to Yas Marina this year.