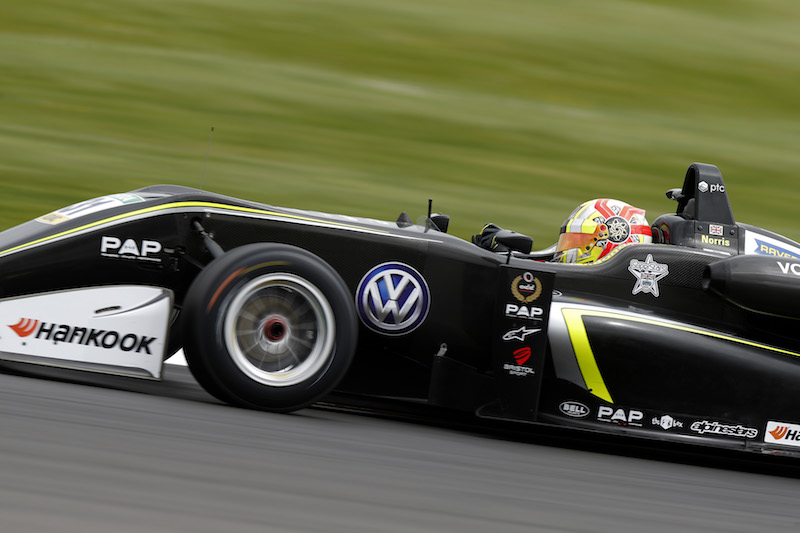 Rookie Lando Norris edged out fellow Briton Callum Ilott by six thousandths of a second in an incredible battle for pole in the first qualifying session of the Formula 3 European Championship season at Silverstone.

Carlin driver Norris, beginning his first full campaign in F3 after making his debut at the end of 2016, had two brief spells on top of the times inside the second half of the 20-minute session, before Ilott claimed the place with a 1m50.219s with six minutes remaining.

Two minutes later, Norris went 0.019s quicker than Ilott?s benchmark, only for German Maximilian Gunther to throw himself into the fight with a lap 0.02s better than the new McLaren junior?s.

Ilott responded to take back provisional pole inside the final three minutes, but 30 seconds later Norris had posted a 1m50.094s that would not be beaten.

He therefore turned the tables on Ilott, who had edged him out for first place in both practice sessions earlier in the day.

Gunther, team-mate to Ilott at Prema, was able to improve his time in the final minute but had to settle for third, 0.085s off Norris.

Joel Eriksson was two tenths back in fourth for Motopark ahead of impressive Force India protege Jehan Daruvala, who made it a Carlin one-two among the rookies.

Ralf Aron was 13th in the remaining Hitech car behind Mick Schumacher.