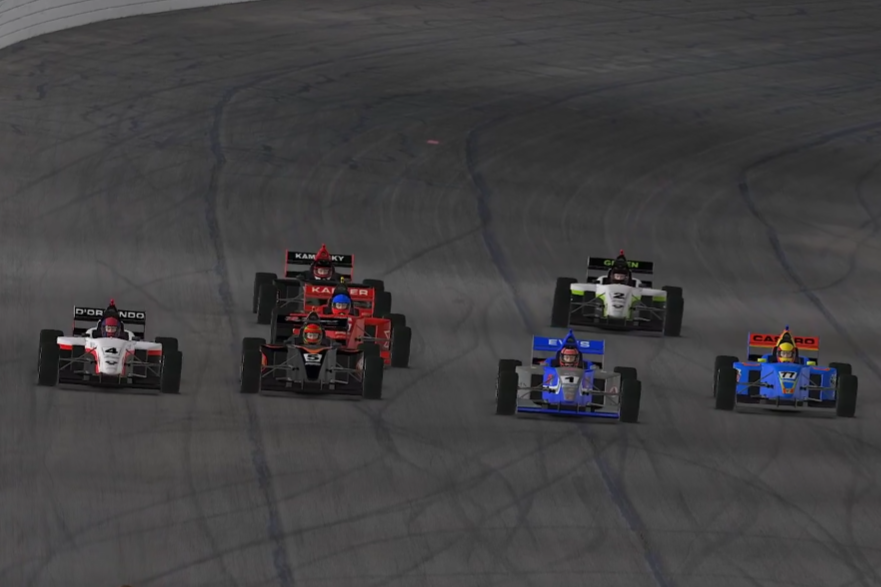 The second Road to Indy eSeries season on iRacing started with two pack races at the Gateway oval, won by Braden Eves and Phillippe Denes.

Legacy Autosport’s Andre Castro beat Pabst Racing’s Yuven Sundaramoorthy to pole, with RP Motorsport’s reigning eSeries champion Denes passing both on lap one to lead. Castro reclaimed the lead on lap two and held on until lap seven, when Denes came back past.

Once again Castro responded, this time on the same lap, as a lead pack of four emerged. Denes edged ahead down the pit straight, then briefly conceded to Castro again. They swapped positions every lap until lap 12, when Eves got his nose ahead down the back straight.

Eves then ran ahead of Castro through Turn 1 on the next three laps, with Castro then getting loose and being hit by Denes.

This required the safety car, and Pabst’s Colin Kaminsky overtook Eves too early on the restart, earning himself a penalty.

Now it was Miller Vinatieri Motorsports driver Max Kaeser’s turn to challenge, and he diced with Eves for 10 laps. He ended up finishing 0.156 seconds behind, with Andretti Autosport’s Danial Frost in third.

Seven cars finished on the lead lap, with the top 10 reversed for the race two grid. It put Castro on pole again, ahead of team-mate Cameron Shields.

Race two started as night fell, and the lead changed several times among the Legacy drivers before lap one was complete.

The pair then worked together to hold fort at the front, which worked until a crash involving Andretti’s Robert Megennis required the safety car. Just as the call had been made to slow the pace, Kaminsky passed the top two.

Castro returned to the front shortly after the restart, before Shields managed to time his exit from Turn 4 right for five laps to cross the start/finish line ahead every time. That resolve was finally broken by a technical problem, and handed the lead to Castro.

Denes, from 23rd on the grid, was challenging now and the combined pressure of himself and Eves put Castro down to third.

Castro was usually strongest entering Turn 1, while Eves had a better run down the back straight to lead into Turn 3 over the next 10 laps. A lead pack of six built up during this time, as several other frontrunning cars spun out.

Denes and Eves swapped the lead continuously through the final laps, with Kaeser also briefly having his nose ahead.

Castro crossed the line to start the last lap in first, but it was Denes who carried more speed into Turn 1. Eves had the better run through Turn 2 to lead, and blocked the inside for Turn 3 to prevent Castro passing.

Lapped Cape Motorsports driver Michael d’Orlando sat ahead of them in Turn 4, and despite his presence there was a four-wide run out of the corner for the lead. The drag race was won by Denes by 0.024s, ahead of Eves, Kaeser, Castro, Kaminsky and d’Orlando’s team-mate Josh Green. D’Orlando was disqualified for ignoring blue flags.