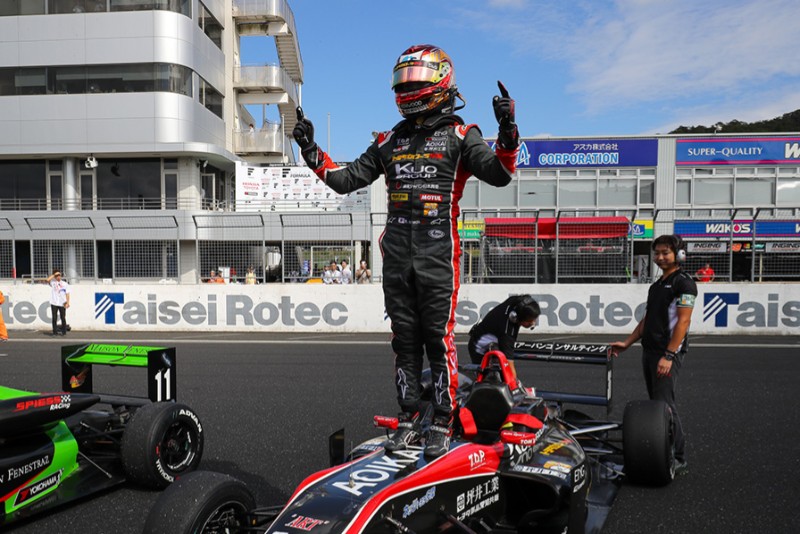 Ritomo Miyata dominated the final Japanese Formula 3 round of 2019 at Okayama, defeating champion Sacha Fenestraz in both races.

With the title wrapped up by Fenestraz at the previous Twin Ring Motegi round and Miyata guaranteed second in the standings, the pressure was off for both drivers in the final races of the championship while it can still use the F3 name.

On the first visit of the year to Okayama, Fenestraz and Miyata won a race apeice, but this time Miyata dominated. The TOM’S driver took pole position for both races and led from lights-to-flag in both, despite a brief scare on track early in race one.

Miyata will go down in history as the last ever Japanese F3 race winner, as the series changes its name to Super Formula Lights next year.

Fenestraz had no answer for Miyata’s pace but was able to comfortably stay in second place in both races without any issues.

Sena Sakaguchi filled in for Kazuto Kotaka as Miyata’s team-mate for the second time this season and in both races completed the podium. Sakaguchi originally qualified fourth for race one behind Charles Milesi, but Okayama Team’s Milesi was excluded from qualifying for a pit lane speed violation.

Fenestraz’s B-MAX Racing with Motopark team-mate Enaam Ahmed had a difficult weekend but still secured third in the standings. He qualified fifth for race one and fourth for race two, but could only convert that into a non-finish and a seventh place.

Hiroki Otsu and Yoshiaki Katayama both left the weekend with one fourth place each, both times ahead of Toda Racing’s Toshiki Oyu – who recently dominated at Silverstone when cameoing in Euroformula Open.

Despite having two points finishes, Oyu missed out on third in the standings to Ahmed by three points.

Ai Miura made her return to Japanese F3 after an injury at the fifth round at Fuji, while 44-year-old Takashi Hata took part in his first race of the year in the series with B-MAX/Motopark and matched his career best result of 12th.