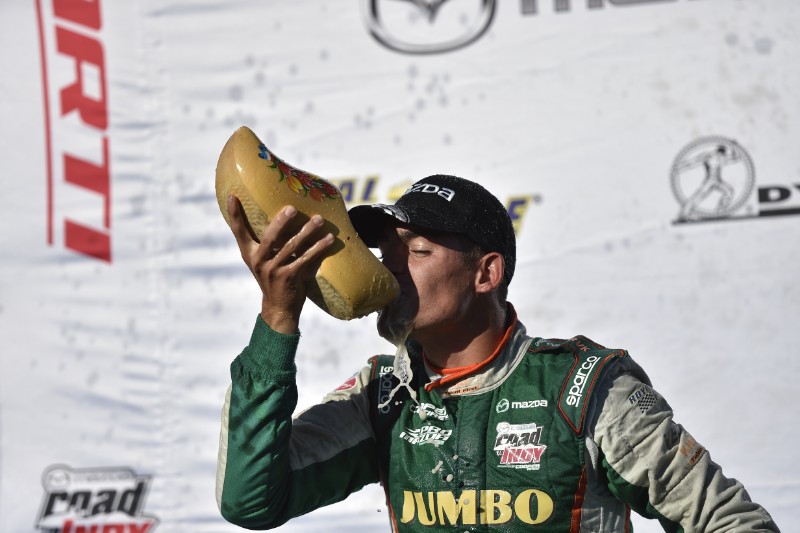 The rapid ascension of Max Verstappen has caused the already-passionate Dutch to erupt into a single-seater craze, but he’s not alone in leading the rise of motorsport’s popularity, with one compatriot making a name for himself in the United States.

The Netherlands has not produced a full-time IndyCar driver in a decade, since Robert Doornbos drove in 2009. You have to look back further to find major success – two-time Indianapolis 500 winner and lap record holder Arie Luyendyk being the only name of note.

Rinus van Kalmthout, now self-styled as Rinus VeeKay, is emerging as a potential star as he climbs up through the Road to Indy ladder. His first season stateside, in 2017, was impressive enough – in USF2000 he finished every race in the top six and took three wins with Pabst Racing en route to second in the standings behind Oliver Askew.

2018 was the breakthrough. Five successive wins in addition to two at the opening Pro Mazda round resulted in a commanding title success with Juncos Racing over Parker Thompson and Askew. Every race was finished in the top five except for one at Indianapolis, in which he retired.

That retirement is VeeKay’s only one since the start of 2017. That’s an impressive feat for a young driver. It’s a enviable record that would translate well into IndyCar, given the tightness of its racing.

“Coming to Pro Mazda [now known as Indy Pro 2000] I had a lot more racing experience from the USF2000 season, and I think in both seasons I was quite consistent, so having a lot of finishes and podium finishes,” the 18-year-old tells Formula Scout.

“I was more complete as a driver and I was really happy with Juncos Racing.” 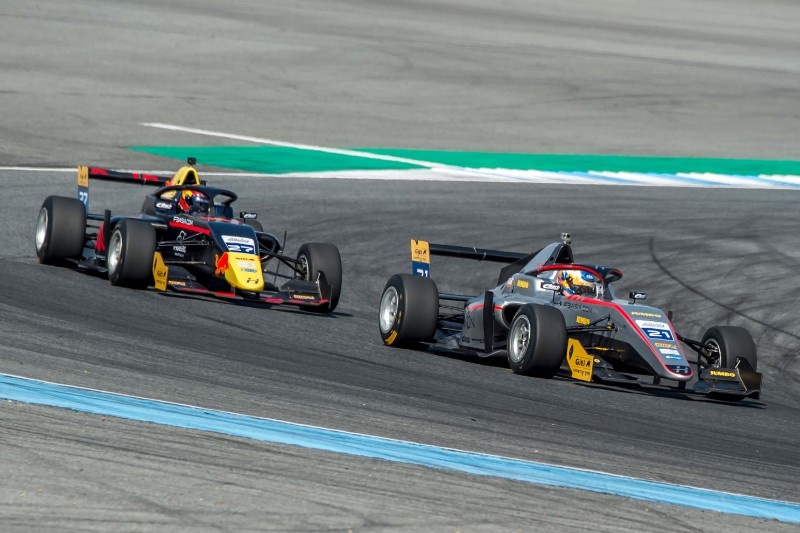 This translated into what was arguably VeeKay’s most impressive campaign yet – beating more experienced European opposition in the 2019 Asian Formula 3 Winter series. The likes of Yifei Ye, Max Fewtrell and Dan Ticktum found themselves beaten handsomely by the Dutchman, even if the title wasn’t the apparent goal.

“I did the Asian series for the experience that I didn’t have with turbocharged cars and everything coming to Indy Lights,” VeeKay explains.

“Even if the F3 has less power, it has the turbo so it’s a little bit different to drive to the Pro Mazda. It’s a good way to learn and it worked out pretty well!

“For me, it means a lot to drive against them, and I also learned a lot. They have a lot of experience with the tyres from Europe. I’ve learned a lot from Dan and Max and from everyone around me. I think that has made me a better driver and I’m more ready for Indy Lights.”

Although VeeKay’s Asian escapade was a learning exercise, he’s also been bolstering his experience in Europe driving a previous generation GP2 car in BOSS GP occasionally. His father Marijn van Kalmthout also races in the series.

“I wasn’t expecting to win [Asian F3] actually. If I saw all the names driving, I wouldn’t know how well I was compared to them. But I think it’s been a really good off-season. I’ve shown some kind of level [of competitiveness] in the United States so I’m very happy with that.”

VeeKay kept his head cool in the three-round fight, eventually edging Ye to the crown as Ticktum’s campaign unravelled. 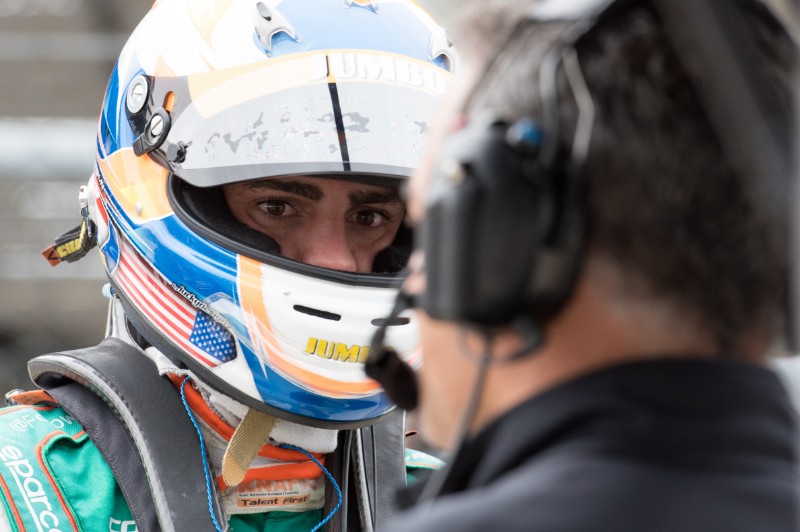 The Verstappen comparison does not necessarily reflect the driving approach or the meteoric rise through the junior ranks, but that is not a bad thing. VeeKay’s approach is more methodical, and his climb up through the ladder is more conventional in America. But when it comes to it, spending one season in each of the RTI series is pretty rare.

There’s a lot more to success in IndyCar than just being quick. It rewards consistency (despite the double-points races) and last year Scott Dixon took his fifth title without starting from pole once.

Indy Lights has proven to be the perfect stepping stone for young (and even some experienced) drivers making the jump to IndyCar, especially since the introduction of the spec 2018 bodykit which has been deemed closer to an Indy Lights car than the manufacturer-designed predecessors.

“I think it’s a good lesson for tyre saving and also using the push to pass in Lights coming to IndyCar. To drive more strategically, [Lights experience] is good. It’s crucial to be good in Lights to be good in IndyCar,” VeeKay offers.

While much will change in 2019 for VeeKay, with longer races, tyre saving and strategic elements, but there will be one constant – his rival Askew. The difference between the title in Lights and runner-up spot the pair will be fighting for is a budget for three IndyCar races in 2020, including the Indianapolis 500.

Both have climbed the RTI ladder together – Askew drew first blood in USF2000, before VeeKay struck back in IP2000. In 2019, both will challenge for the Lights title with top teams – VeeKay remaining at Juncos, while Askew moves to Andretti Autosport. 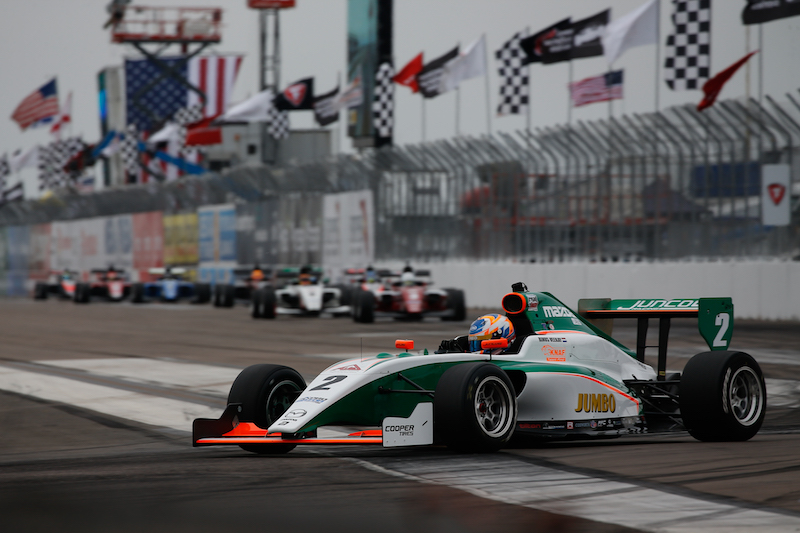 “I think he [Askew] will be a challenger again, he has always been quick whenever I was around, so he is one of my rivals, like the last two seasons. He’s super quick when he’s on his own, doing his thing. To race against those guys shows the level is really high in Lights with the veterans [that are] coming back.”

Joining Askew and VeeKay are two fourth-season drivers, a IndyCar driver stepping back down a tier, and for at least the season opener appearances by a GP3 regular and Lamborghini GT driver.

After his success in Asia, the Dutch hype around VeeKay has stepped up another gear. The Verstappen effect has played a small role in that.

“A lot of people have started following me now, especially after the Winter Series because it’s more [familiar to] Europe.

“The publicity will get really big now in Lights, which is the [best] known series in the ladder to IndyCar. It’s getting better and better with publicity and I have some really, really die-hard fans already.

“They’re very passionate, especially about Max Verstappen. They love their motor racing. Also, because I have the same sponsor as Verstappen, which is [Dutch supermarket brand] Jumbo. 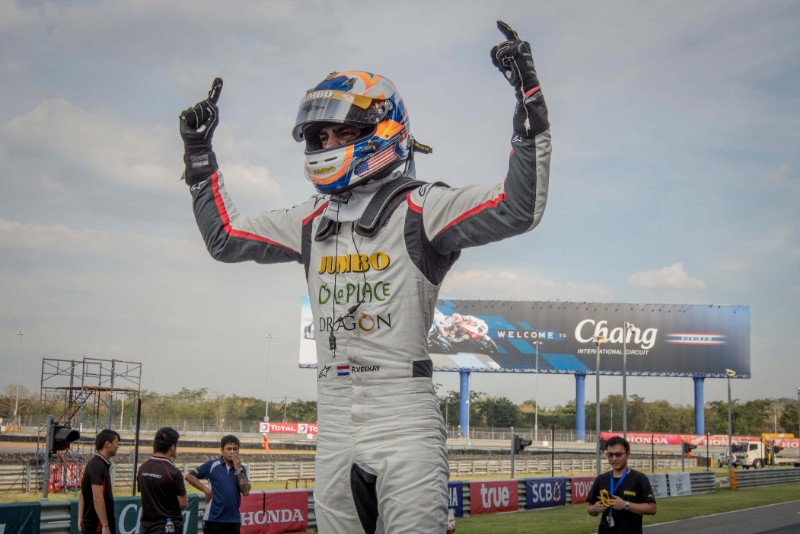 With such a rise through the ranks, it would be easy to get carried away and look at a 2020 IndyCar debut. But VeeKay remains firmly on the ground.

“That [looking at 2020 drives] is nothing we’re thinking about right now, we’re just focusing on Indy Lights and trying to win that and afterwards we’ll see what comes around.

“My goal for IndyCar, of course, is to be successful. Looking back at my previous seasons in car racing, if I can get to a good IndyCar team, I can be quick. I’m just doing the best I can and try to be the best around. That’s all I want to do. And, of course, win the Indy 500. That’s the really big goal.”

IndyCar drivers tend to branch out into other motorsport series, especially America’s IMSA sportscar series. Others make appearances in endurance races further afield, and some have an interest in rallying. But none of that interests VeeKay right now.

“There’s a lot of other racing dreams, like Bathurst, that’s a track that would be super cool to drive but I think just IndyCar’s in my sights and what happens after that, I don’t know yet. But I hope that it will be a good future.”

VeeKay placed in 35th as a new entrant in our hotly-debated Top 50 drivers of 2018. If the form shown at the start of 2019 carries through for the remainder of the year, he may just be a contender for a top 10 placing this year. 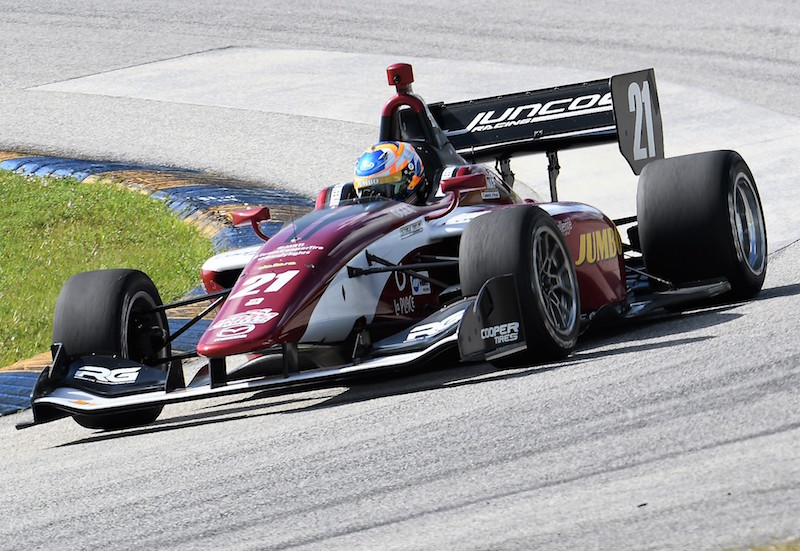