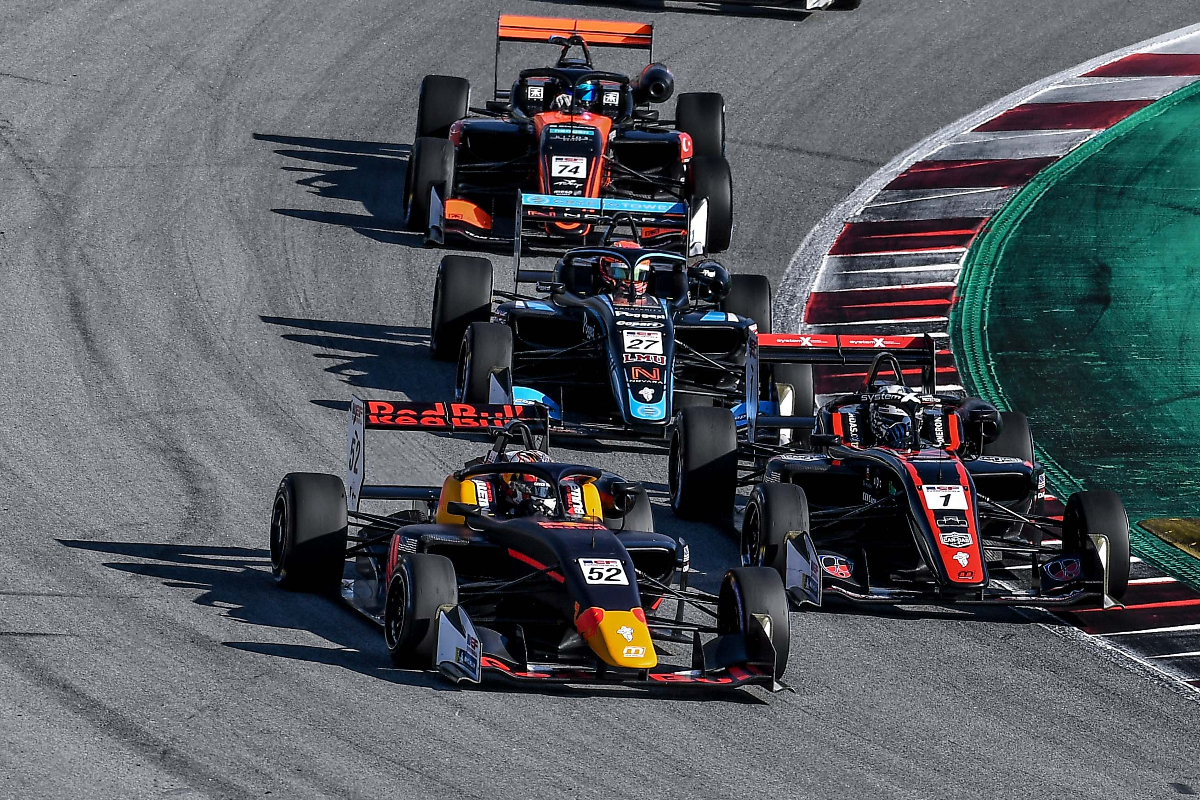 The three-way Euroformula title fight in 2021 was often without its third member, and incredibly bad luck led to one of the two others scoring zero points in the penultimate round. So who was truly the best?

In 2019 and ’20, Motopark and its Japanese offshoot CryptoTower Racing Team had line-ups that all but guaranteed title success but were often at risk of imploding, with the tension only being cut by FIA Formula 3 Championship rounds.

Two years ago it was Red Bull juniors Liam Lawson and Yuki Tsunoda who had a few too many on-track skirmishes and then were absent for two rounds as their Formula 1 backers wanted them on the support bill with them when the calendars clashed. It was same the issue last year as Yifei Ye and Lukas Dunner faced off whenever Dunner wasn’t doing FIA F3 instead.

This year Americans Cameron Das and Jak Crawford drove for Motopark, while Louis Foster represented CryptoTower. Crawford was the one doubling up in FIA F3, and missed almost three rounds as he didn’t turn 16 until the Sunday of the Algarve season opener. As a result, he didn’t get in the car until race three but still scored eight points on the undulating track.

While Crawford came in as a highly-rated driver and a Red Bull junior, it would be ambitious to predict pre-season that with such a restricted start to his campaign he’d be able to consistently challenge the ferocious qualifying pace Foster showed in Portugal or the guileful racecraft that comes from experience with Das. As it turned out, Crawford was more than their match.

The three got on far better than Motopark’s previous line-ups, but also they were sending each other off just two weeks after supporting Formula 1’s Portuguese Grand Prix as the paddock headed to Paul Ricard for round two.

Championship leader Das, who had waited 57 races for his first win then became only the second driver to win three times in a weekend at Algarve despite the introduction of a reversed grid race, topped pre-event testing (which Crawford was absent from due to F3 testing) and FP1 in France. Crawford climbed to the top in FP2 and qualifying, then converted that into victory on just his second start in the opening race of the weekend despite a safety car intervention. 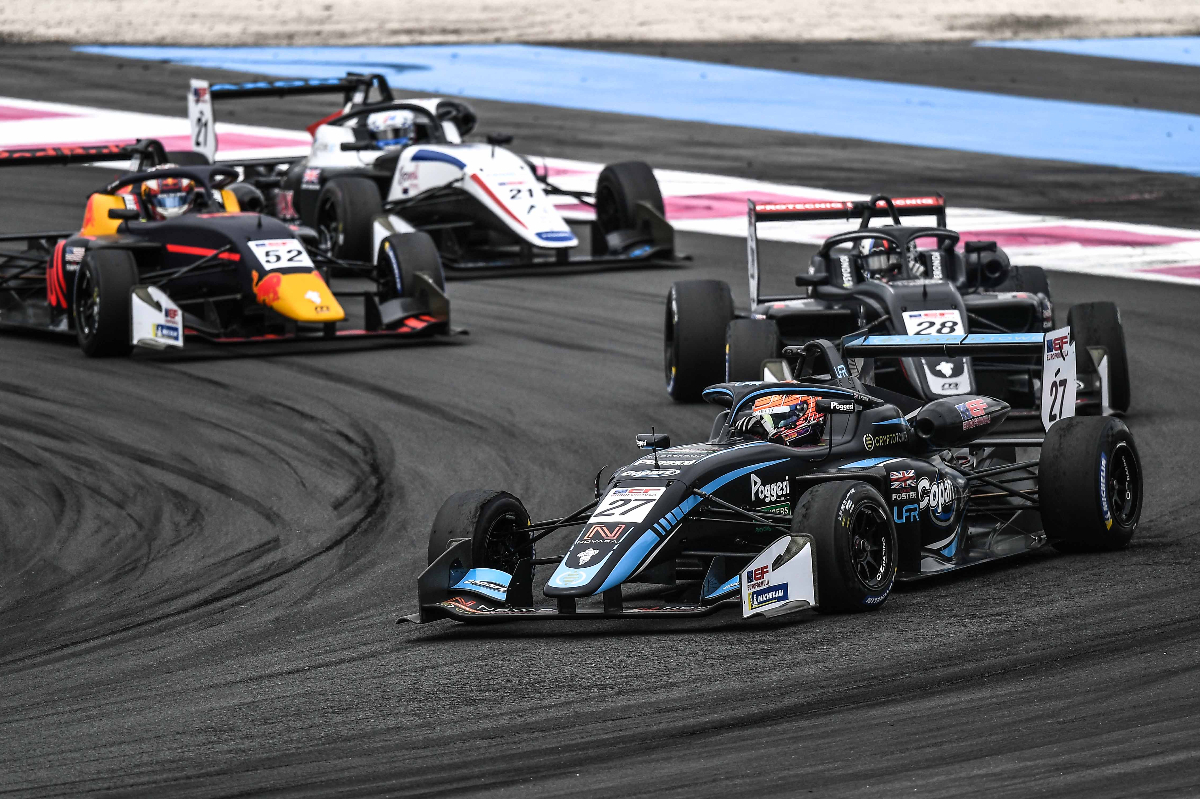 Das and Foster had their first instance of close contact on the restart, and it was Das who took second as Foster struggled that little bit more late on with his tyres. It proved to be a distinguishing factor through much of the season, as close battles between the three sometimes lost Foster once he has to focus more on tyre management than his rivals.

In the reversed-grid race two at Paul Ricard, Foster led VAR’s Casper Stevenson and Crawford but the pace advantage the latter had meant he soon made it into second and appeared in Foster’s mirrors. Many laps of mistake-free defence kept him at bay until the tyre disparity became too much on the penultimate lap as Crawford edged past around the outside of turn one after they nearly interlocked wheels down the pit straight.

It was a three-way fight in race three, with the Motopark/CryptoTower trio spending the first half running line astern. Foster took the lead from poleman Crawford around the outside of turn one while the faster starting Das got boxed in.

Das took second from Crawford around the outside of turn 10 on lap three of 16, but Crawford reclaimed it by going wide then cutting in at the next corner, but Das was back ahead at the next direction change.

Crawford then got second place again at the final corner on the next lap, and he started challenging Foster – who was already struggling to get the maximum out of his tyres – for the lead. Foster ran Crawford deep into the Mistral chicane on lap six, and this meant the three went three-wide into turn 10. They navigated safely, and next time around Crawford did manage the over-under to pass Foster. Das tried following through and Foster had to work really hard to stay in second.

However the slipstream meant he could repeat his turn one move just a few hundred metres later and be back ahead, and Das then caught Crawford at turn 10 but he somehow kept second place. On the next lap Crawford got down the inside of Foster at turn 11 for the lead, but a small tap led to a spin for Foster and Crawford going off. He returned to track side-by-side with Das, with the new lead battle only being settled at the final corner.

Now free of Foster, the Americans sprinted away in the remaining laps, and a wide moment for Crawford settled the victory battle in Das’s favour. Foster finished sixth.

On raw pace at Paul Ricard, Foster was also bettered by Van Amersfoort Racing’s Rafael Villagomez who had missed testing for F3. Crawford ended up being the benchmark driver over one lap at every race meeting he attended qualifying in bar the Barcelona season finale where VAR’s Cem Bolukbasi capped off a similarly depleted campaign in style with a pole and a win.

In Crawford’s absence, Foster followed up his debut weekend win at Spa-Francorchamps in 2020 with a triple win there on his return to the circuit and an unmatchable pace were it not for the power of the two keeping Das close. They came incredibly close to contact more than once, but team principal Timo Rumpfkeil could breath a sigh of relief that the clashes of the previous two years were not repeated.

Das took his first pole on his 63rd attempt at Monza when Crawford was away again, and turned that into his sixth win. He picked up a seventh victory in race three after on-the-road winner Bolukbasi was penalised for gaining an advantage off-track in monsoon-like conditions.

That weekend was nadir for Foster, but not self-imposed. He qualified second, but in race one didn’t get past lap one as he was rear-ended out of the race by Motopark driver Reshad de Gerus. Front suspension damage put him out of race two as well, and as he tried to recover up the order in race three a clash with Drivex School’s Enzo Scionti led to another suspension-linked retirement. Das took 62 points from a weekend in which his rivals took nothing.

The eventual gap between Das and Foster at the top was 67 points, so a tasty title battle was certainly denied at Barcelona.

“Winning would have been nice, but I think Monza messed us up a little and cruelly took our chances away before we’d even got there. It would have been more interesting if me and Cam had a similar round at Monza, and taken the fight to Barcelona. I would have had a good chance… it would have been tense, of course.”

Crawford finished 78 points back but outscored Das by 76 and Foster by 87 when he was present, and was similarly reflective.

“It was a good season,” he said. “It was a shame we didn’t get to do all the rounds to see what I could have done. But happy with what I’ve achieved and what I’ve learned, and happy to get eight race wins as well. Definitely can’t complain.”

Das meanwhile was very analytical of his season, and it’s because that’s how we won the title. It was rarely about outright pace, although only twice was he outside of the top two on pace, and he used experience, analysis and the coolest head in wheel-to-wheel action to maximise his scoring across the year after his stunning Algarve triple win.

Rumpfkeil picked up on this, and also commented on the title battle.

“From our side, three guys really pushing each other with Louis, Jack and Cameron. There’s been nothing inbetween those three. Whoever had the better weekend ended up on top, really. So you couldn’t really say from the beginning [who would win].

“Jak pulled out of championship contention with the clashes of the FIA F3 which I hope is the last time we have this issue with COVID-19 mixing up all the calendar, so I hope we have a normal season next so fingers crossed on that. Because it would have been nice to see him in that title fight, but with three events off this year, no chance.

“I’m happy for Cam that he won the championship, because I think he really deserved it with the consistency and the work he put in. Equally Louis would have deserved it, but I think for Cameron the progression and the development he had, and the work he put in just made the difference for him and I think it’s been really rewarding for him that he got the title in the end based on hard work and really progression for himself.” 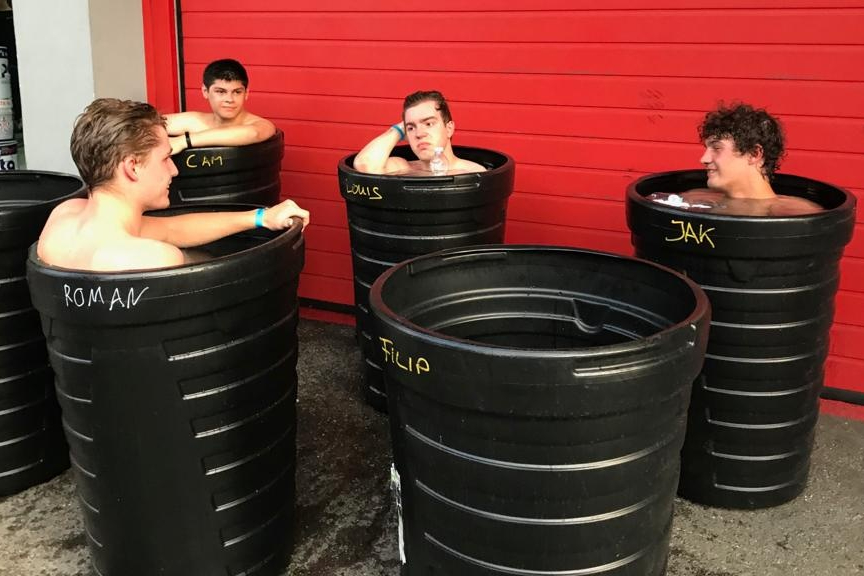 There were more star Motopark drivers, as FIA F3 racer Roman Stanek cameoed at Imola and took a win and a second place, while GB3 race-winner Christian Mansell debuted with Carlin at Spa then returned with Motopark for the final two rounds and just missed out on the top 10 in the standings despite contesting only three rounds.

“We had the absolute pleasure to have really good drivers this year in the cars, with Roman Stanek, which was a stunning performance he put in at Imola,” Rumpfkeil added.

“And a really nice bloke to have around. Then Christian also, in Monza showing off really, really well. Here at Barcelona, good pace, still needs a bit of time. And I think that’s the same for Jak. He’ll definitely progress very well in FIA F3, Formula 2 and hopefully in F1 because I think he’s an exceptional talent. Obviously the results he’s delivering at this stage is really very, very high level, and I’m confident that he’s going to move up quicker.”

Rumpfkeil actually helped engineer Mansell for the final two rounds, with an inexperienced lead engineer on the car, and it certainly made a difference. Going off the line-ups in winter tests, it looks like Motopark could be running several potential title contenders again in 2022.