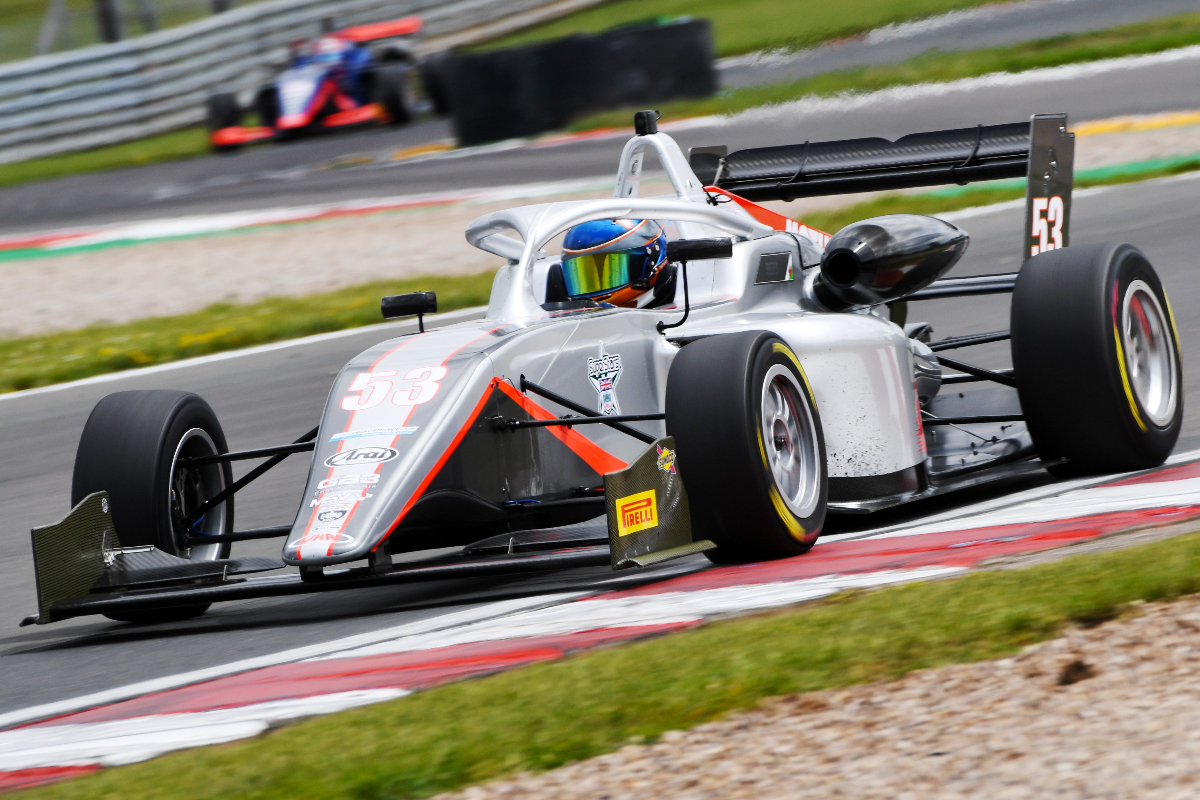 JHR Developments’ Matthew Rees was fastest in Thursday’s pre-event testing as track action got underway for this weekend’s GB3 round at Snetterton.

Rees set a 1m42.287s in the first of three 40-minute sessions and was half a second clear of Hitech GP’s Luke Browning and Fortec Motorsports’ Joel Granfors – the only other two to lap sub-1m43s.

Browning set the first representative laptime approaching the halfway stage of the morning running with a 1m43.877s. Rees then lapped 0.4s faster, with Carlin’s Javier Sagrera moving up to second.

Granfors moved to the top of the timesheet, and improved by a further half-second on his next effort to a 1m42.789s. Marcos Flack went second quickest behind Granfors in the closing stages for Douglas Motorsport, but the pair were both beaten by Rees, who set his 1m42.287s just before the chequered flag fell.

McKenzy Cresswell was fifth for Chris Dittmann Racing ahead of Roberto Faria (Carlin) and John Bennett (Elite Motorsport) – the trio all improving on their final laps – while Browning slipped back to eighth.

Browning was the highest placed driver from the morning to improve in the first afternoon session, lowering his best lap by over a second to top the times with a 1m42.793s – putting him second overall for the day.

Granfors leads Browning by one point in the standings and was 0.166s behind his rival in session two, while Carlin’s Callum Voisin bettered his morning effort to go third.

Rees was fourth ahead of Hillspeed’s Nick Gilkes, who also improved to be the ninth fastest driver of the day. Having only completed one lap in the morning, Max Esterson was seventh for Douglas with a 1m43.612s.

The final session was topped by Rees with a time almost 0.8s shy of his morning best, with Granfors and Browning close behind. Sagrera improved to end session three in fourth, but remained sixth overall behind Voisin, who didn’t better his session two effort.

Cresswell and Esterson both lapped slightly quicker as well, but the biggest improver was Arden’s Nico Christodoulou, who found 0.9s to end the day in 10th.

Elite’s Tom Lebbon missed most of the first sessions, but did 15 laps in in session three with a best time of 1m44.189s.

GB4’s points leader Nikolas Taylor was fastest in its testing. Only six drivers took part, but 10 are expected for Friday.

Fortec’s Taylor headed the first two sessions, his best lap of 1m49.598s set in the morning. Kevin Mills Racing’s Tom Mills was 0.126s behind, having improved in the final couple of minutes of the day’s running to top session three. His team-mate Jarrod Waberski was a further 0.459s adrift, having also made a late improvement in the final session.

How Euroformula put the go in Goethe