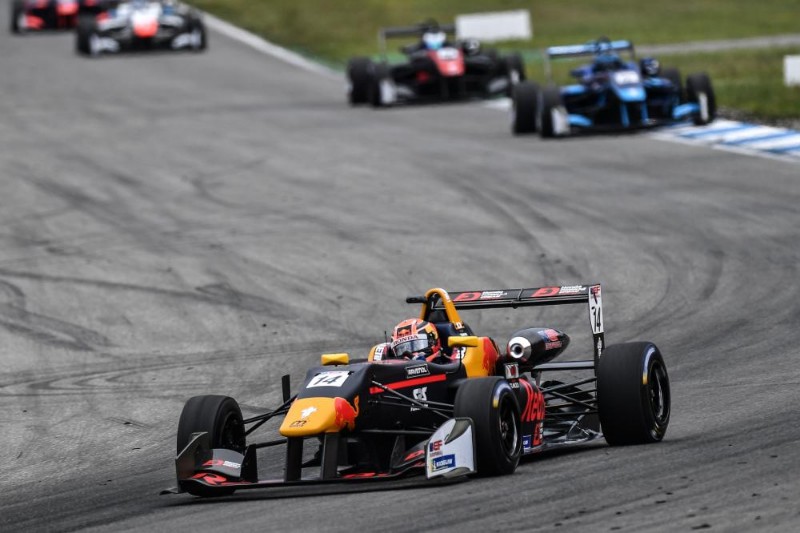 Sato made a good start from pole, but was soon under pressure from Tsunoda and didn?t fight back when his team-mate made a move. He was soon passed by other Red Bull-backed team-mate Liam Lawson too, who held second place until a late-race spin.

The leader had not been put under much pressure by Lawson, and although Sato had saved his tyres early in the race with a charge towards the end in mind, he didn?t have the pace to respond to Tsunoda and the Japanese pair finished 5.654 seconds apart.

Teo Martin Motorsport?s Lukas Dunner spent the whole race pressuring Motopark?s Julian Hanses, with roughly 0.8s separating the two for most of proceedings. Lawson?s spin elevated their battle to one for a podium spot, and Hanses held on to third place and a podium finish on home soil.

Lawson ended the race in fifth, handing Sato a significant advantage in the fight for the title.

Carlin?s Nicolai Kjaergaard finished sixth, and completed the rookie podium behind Tsunoda and Lawson. Late in the race he came under pressure from Double R Racing?s Jack Doohan, who had been involved in a lap one skirmish that put Aldo Festante (Teo Mart?n) and Christian Hahn (Carlin) out of the race, and also significantly compromised Fortec Motorsports driver Cameron Das.

Das?s own fightback also brought a points finish, taking 10th place from Teo Martin?s Guilherme Samaia towards the end and finishing on the tail of Carlin?s Teppei Natori and Fortec team-mate Calan Williams.

Linus Lundqvist had started in the top five, but put himself out of the race at the end of the first lap by removing his front wing on the end of the kerb at the final corner.