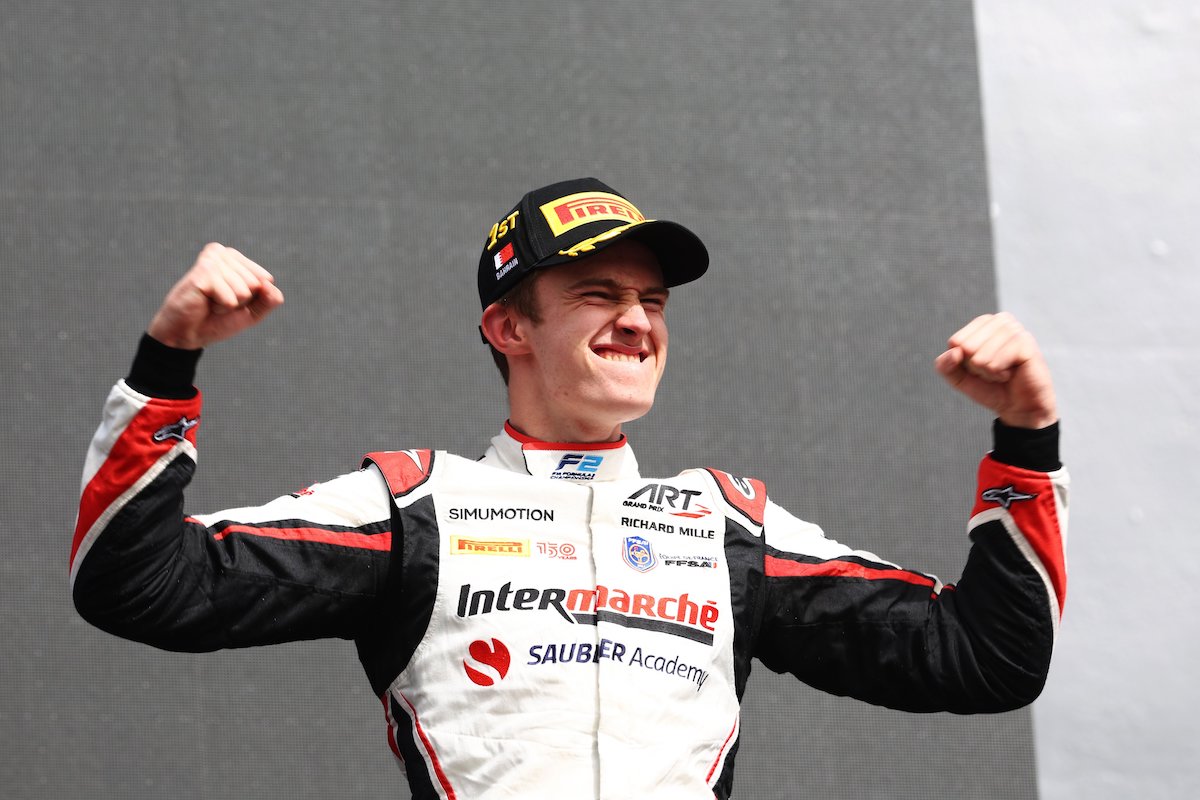 Theo Pourchaire won an incident-filled first feature race of the Formula 2 season in Bahrain ahead of Liam Lawson and Juri Vips.

Vips and Campos Racing’s Ralph Boschung had two rocket starts to move up to first and second place from third and fifth on the grid respectively, pushing front-row starters Jack Doohan and Pourchaire back to third and fourth.

Marcus Armstrong, Calan Williams and Olli Caldwell gained several places on the opening lap to get in the top 10 after starting on the soft tyre, as did Ayumu Iwasa from last on the grid.

On lap two, ART’s Frederik Vesti was spun round at turn one and stalled, bringing the safety car out. At the restart, Doohan and Pourchaire overtook Boschung, who would lose two more places in the following laps.

The soft tyre runners continued to make up places and the first pit-stops didn’t come until around lap 13, when drivers on the hard rubber pitted for softs. These included Vips, but an issue with his front-left tyre led to him losing more than 10 seconds and giving up the net race lead.

Pourchaire became the new race leader once all the drivers had pitted, Iwasa the last to do so after making it all the way up into the lead.

Lawson took second place while Doohan touched the rear of Pourchaire after exiting the pits and had to pit a second time for a new front wing.

With just five laps to go, a high-tension battle involving bewteen five cars ended up with Enzo Fittipaldi touching and spining Trident’s Richard Verchoor around at turn one.

The safety car was deployed and several drivers decided to pit, led by Prema’s Dennis Hauger and Williams who left their pitboxes before the tyre change was completed, resulting in both losing their front-left tyre as they joined the fast lane.

The race resumed with two laps left, although just one more lap would be completed as the race hit the one-hour time limit.

Pourchaire held on to the lead to win ahead of Lawson and Vips, who had recovered part of the ground lost in the pits.

Both Boschung and Armstrong took advantage of a struggling MP Motorsport’s Felipe Drugovich – who made a particularly early switch from hard to soft rubber – to finish fourth and fifth respectively.

Logan Sargeant, Roy Nissany and Jake Hughes were next, with Doohan benefitting from the late chaos to claim the final point in 10th after making four pitstops.