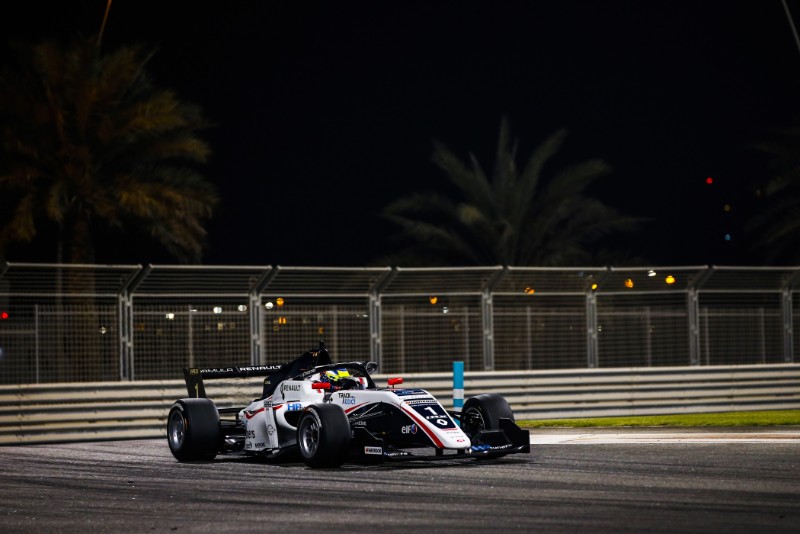 Oscar Piastri extended his Formula Renault Eurocup points lead with victory over title rival Victor Martins in the penultimate race of the season at Yas Marina.

MP Motorsport’s Martins started from pole but made a poor start, allowing R-ace GP’s Piastri and MP team-mate Lorenzo Colombo past into Turn 1.

He then lost further ground around the lap, and it wasn’t until lap five that he closed back in on his team-mate and completed a easy move for second place at the hairpin after MP ordered Colombo to let him through.

He was also helped by a brief safety car period to recover the stranded Global Racing Service car of Xavier Lloveras.

Martins then started setting fastest laps once in second place, but the gap between the top two was only getting smaller by thousandths of a second at first.

On lap nine of 15, Martins broke into the 2m08s and cut Piastri’s lead down to under two seconds, but the leader responded on the next lap. Martins then set fastest lap again, and had trimmed his rival’s advantage down to 1.24 seconds with two laps to go.

Piastri pushed once more on the penultimate lap, then cruised to the finish on the final tour to take his seventh win of the season and take a 20.5 point lead into the title decider.

M2 Competition’s Kush Maini was in fifth for the first two thirds of the race but then dropped? pace and came under pressure from Arden’s Patrik Pasma for sixth late on. Caio Collet was eighth for R-ace GP, ahead of R-ace GP duo Amaury Cordeel and Matteo Nannini.

Frank Bird and Leonardo Lorandi had dramatic starts, one with a stall and the other with a pitstop, but recovered to 17th and 15th. Championship debutant Matthias Luethen finished last for GRS.