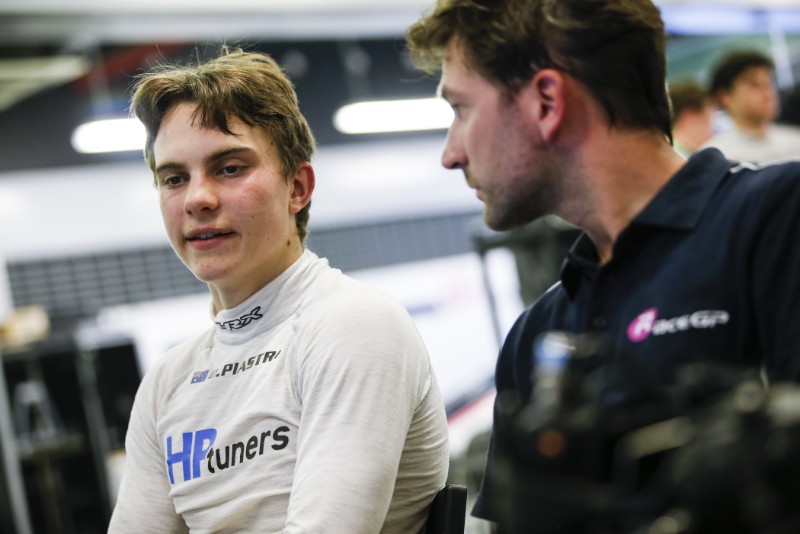 Formula Renault Eurocup points leader Oscar Piastri has described his victory in the opening race at Yas Marina as a nerve-wracking experience.

The Australian qualified second, 0.002 seconds behind title rival Victor Martins, but overtook the MP Motorsport driver for the lead at the beginning of the race.

He was unchallenged for the lead for the remainder of the 15-lap race, despite an early safety car intervention, and took his seventh win of the season for R-ace GP.

“My start actually wasn’t that good,” Piastri said immediately after the race, which was the first in the Eurocup’s history to be held at night.

“Victor’s must have been really bad, because Lorenzo [Colombo] got a much better start than both of us.

“I think that was the most nervous half an hour of my life. So pretty glad that one’s over to be honest and to come out on top – it’s perfect for going into tomorrow.”

Martins dropped to third at the start, and gained a place on MP team-mate Colombo shortly after the safety car period. Colombo, who finished the race in third, revealed that the team had requested he let Martins through to boost the Renault junior’s title hopes.

“I made a bad start. Then after that it was very difficult,” Martins said of his race. “But I kept my head down. And I think that’s the way we need to take tomorrow as well.

“Everything is still to play. Anything could happen tomorrow, the championship is not over.”

The gap between Piastri and Martins now sits at 20.5 points, with 25 available in tomorrow’s season finale.

Finishing seventh would guarantee Piastri the title regardless of Martins’ finishing position, although the addition of three guest drivers to the grid this weekend means the title could technically be sealed by lower finishing positions for either contender.