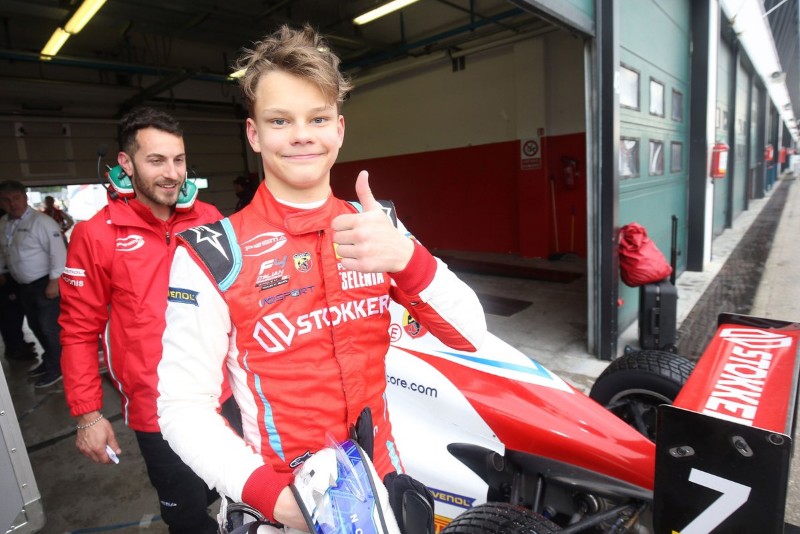 Poleman Nicklas Krutten led right until the penultimate lap, when after fending off Van Amersfoort Racing team-mate Dennis Hauger he ended up being nabbed by Prema’s Aron.

The Estonian then held on to win, as Hauger dropped down the order and then came into the pits with front wing damage. Having started down in eighth, Sauber junior Theo Pourchaire made steady progress until the closing laps of the race when he joined the battle for what was fourth.

He passed US Racing team-mate Arthur Leclerc and then Mucke Motorsport’s William Alatalo, leaving him ideally placed to benefit from Hauger’s poor fortune. The Norwegian had won the second race, but was demoted to 14th by a 30-second penalty. It was where the Red Bull junior then started the final race.

Leclerc passed Alatalo at the final corner of the race for fourth, with the latter then cutting across the third Sauber-backed car of Alessandro Ghiretti across the finish line to ensure he didn’t lose another place.

Ghiretti’s climb was the most impressive of the race, climbing from 24th on the grid to a points paying position within the first 10 laps, then briefly getting past Leclerc too in the frantic late battles.

Pre-race championship leader Roman Stanek finished seventh, dropping him behind Pourchaire and Krutten in the standings.

The battle for second initially took place between Prema’s Gianluca Petecof and Jenzer Motorsport’s Giorgio Carrara, until the pair collided at Turn 3. Carrara’s car ended up on top of Petecof, although both emerged unscathed, and their crash was the cause of the second safety car period. The two other occasions the safety car was called, it was for debris on the track.