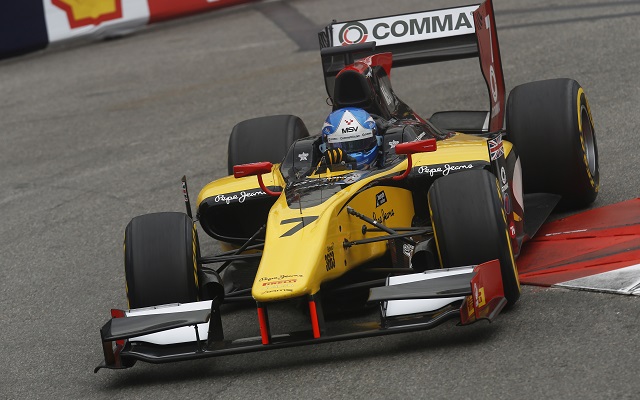 GP2 championship leader Jolyon Palmer was untouchable in GP2 split qualifying at Monaco, setting the benchmark among Group A runners that would prove good enough for overall pole.

Palmer, who set the pace in practice, opted for an unusual strategy in the 16-minute Group A shootout, scrapping his arly flying lap in favour of an outing mid-session.

The Brit took over at the top from Monte Carlo specialist Johnny Cecotto with his first proper effort and would not be matched for the remainder of the group running.

Cecotto, who sat on pole for the GP2 feature races at Monaco in both 2011 and 2012, struggled to improve his time from that point on, which allowed Arden’s Mitch Evans to depose him from second after the checkered flag.

Daniel Abt led the session early on but had to settle for fourth, having been caught out by the checkered flag moments before crossing the line for a planned final flyer. Series rookie Raffaele Marciello rounded out the top five.

As Palmer’s lap from Group A was slower than his practice effort, an improvement in Group B seemed possible, but the Brit’s pole never seemed in trouble throughout the second session.

Local racers Stefano Coletti and Stephane Richelmi appeared to be the prime candidates to top the group, with Stoffel Vandoorne also running at the front. However, with three minutes to go, it was Caterham’s Rio Haryanto who moved into first, remaining there until the checkered flag.

Richelmi took second with a last-minute lap, ending up just 0.011s off the Indonesian. Vandoorne was close behind in third, with Coletti and Julian Leal rounding out the top five.

UPDATE: Daniel Abt has received a three-place grid penalty for blocking, having held up Johnny Cecotto and Andre Negrao in two separate incidents during Group A qualifying.