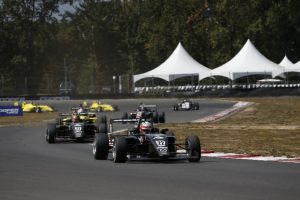 Pabst has won the last two teams’ titles in USF2000, despite failing to win a race this year with its four car line-up. For 2019 it will downscale to three cars, as it enters Pro Mazda with a planned two-car operation.

“I’m thrilled to expand into Pro Mazda for 2019.? Our team has been assembled with a fantastic group of mechanics and engineering staff with unprecedented continuity,” said team owner Augie Pabst.

“Along with our existing staff, we have placed additional personnel within the team to ensure that our Pro Mazda program will seamlessly debut at the same level as our USF2000 program.”

The team has already started an extensive testing programme with its Tatuus PM-18 chassis, which will continue into this weekend’s Chris Griffis Memorial Test at Indianapolis Motor Speedway.

Joining it on the USF2000 grid with two cars, and at the Chris Griffis test, will be Legacy Autosport.

Located in Lebanon, Indiana, the team is owned and operated by veteran Road to Indy car chief and mechanic Louis “Mike” Meyer. Mike?s father Butch Meyer will be acting as car chief.

The Meyer name will be recognisable to IndyCar fans, as Mike’s great-grandfather and Butch’s grandfather Louis Meyer was the first three-time Indianapolis 500 winner and a three time champion in IndyCar’s predecessor, the AAA National Championship, putting him joint sixth in the all-time list.

Mike has spent the previous 13 years working in Indy Lights, being involved in five titles and four Freedom 100 wins during that time. He was also part of Alex Baron’s short-lived 2018 USF2000 campaign, resulting in the only win for a drive other than champion Kyle Kirkwood.

Butch spent five years as Indy Lights’ technical director of the Indy Lights, and also previously ran his own team in the championship.

?I am excited for this next step, to be able to give these young drivers the training and fundamentals to move up the ladder system, and to help them obtain the goal of someday reaching IndyCar and racing in the Indianapolis 500,? Mike Meyer enthused.

?We have assembled team members and partners who are some of the most experienced, knowledgeable and dedicated in the industry. We are all excited for the future and ready to get on track.?