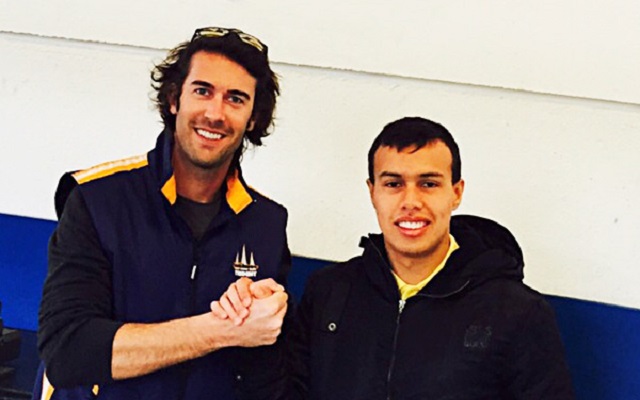 Colombian racer Oscar Tunjo has opted to compete in the GP3 Series this year.

Originally set for a Formula Renault 3.5 campaign with Pons, Tunjo was forced to back out of the deal due to alleged budget issues and had to seek employment elsewhere.

The switch to GP3 will mark the 19-year-old’s departure from the World Series by Renault ladder, which has been the center stage of his career since 2011.

Having made his car racing debut in 2010 by taking runner-up in Formula BMW Pacific, Tunjo spent three years in Formula Renault Eurocup, finishing in the top ten in each season, but only climbing as far as sixth.

He was picked up by Lotus in 2012 and was placed with Signature-Renault for their F3 return in 2014, but left both the team and the programme before the season commenced.

Instead, Tunjo returned to WSR, signing a long-term contract with Pons that started from round three of the FR3.5 season and was supposed to last throughout 2015 as well.

In his 12-race FR3.5 campaign, he scored a best finish of seventh and amassed 11 points.

“After the agreement I signed with Trident, I’m very motivated,” said Tunjo.

“It’s the next challenge in my professional racing career and I can’t wait to start working hard together with the team. The goal is to be a stable presence at the front of the grid and fight for podium finishes and wins.”

The Colombian completes a Trident lineup that features another former 3.5 driver in Luca Ghiotto and EF Open graduate Artur Janosz.

Trident have been a GP3 team since 2012, picking up their only win so far in 2013 via Giovanni Venturini.

“I’m delighted to have reached an agreement with Oscar, completing the driver line-up of our GP3 operation,” said team manager Giacomo Ricci.

“As well as his team-mates, Tunjo has an interesting driving style that I’m sure will bring us lots of satisfaction in the future.”