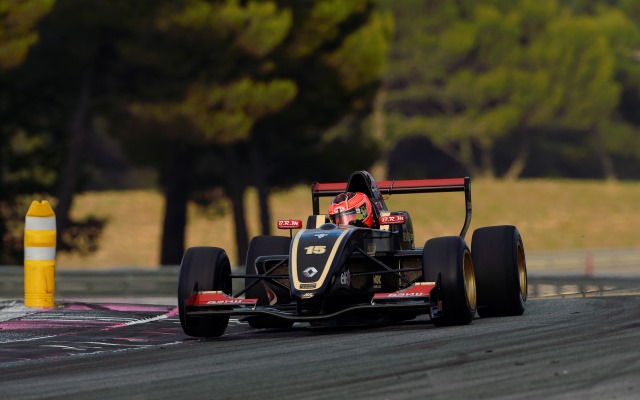 On a wet track, for so long the race had been dominated by Ignazio D?Agosto and Aurelien Panis on their wet tyres, pulling out a ten second gap from the rest of the pack after pole man Luca Ghioto?s early spin.

The pair battled hard and interchanged the lead, however, as the track dried, they were caught firstly by Jake Dennis before Ocon overtook the Brit to claim his maiden series win.

A sensational drive from championship contender Oliver Rowland saw him charge from 19th on the grid to finish on the podium by just 0.001s, getting ahead of Panis in a photo finish.

Pierre Gasly must have been astounded to see his title rival suddenly behind him, then passing him as the Frenchman came home in fifth ahead of Ed Jones.

Guest driver for the weekend and Formula Renault 2.0 Northern European Cup championship leader Matt Parry finished the race in seventh with Koiranen?s Victor Franzoni finishing in the top ten for the first time this season.

Egor Orudzhev, who started on the front row and went off track fought back to end the race in ninth with Oscar Tunjo tenth.

After leading the race for such a long time, D?Agosto?s tyre choice saw him slip away and he was also punished with a ten second time penalty for abusing track limits.

A great win for Lotus junior driver Ocon, who at just 17 years old eeps himself in mathematical championship contention with the maximum points taken. However it is far more likely that the title will go to either Gasly or Rowland who by sneaking on to the podium at the last moment cuts the gap to 11 points going into the final race weekend at Barcelona.

Magnussen dominates race two to get one hand on title