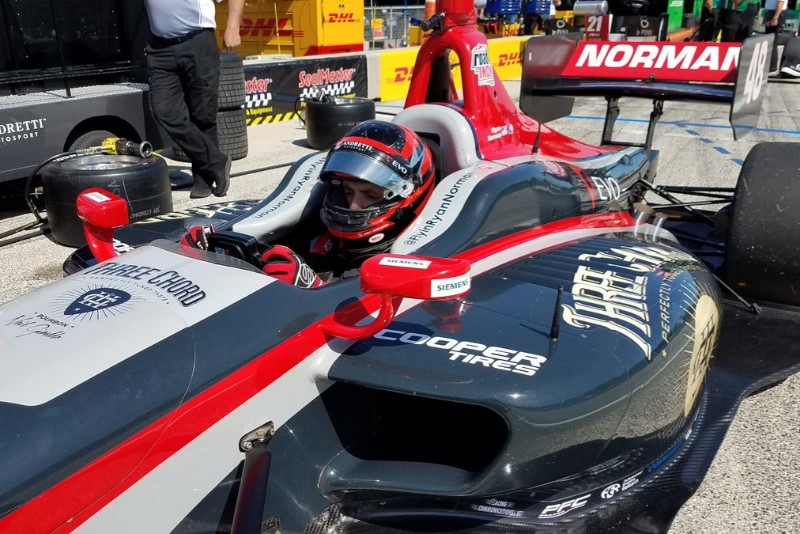 Ryan Norman has admitted he needed a “bit of soulsearching” to turn his impressive pre-season Indy Lights testing pace into strong results after winning at Road America.

The 21-year-old is in his fourth full season of racing, three of which have been spent in Indy Lights. He won the Atlantic title in 2016, and will test an Indycar for the first time this week with Andretti Autosport, the team he currently races with.

Norman took his first Indy Lights win at the Gateway oval last year, and he finished fourth in the standings. His dominant Road America success came from second on the grid, and has elevated him to fourth in the 2019 standings.

“We had a rough start at the beginning of the year. My driving fell off a little bit, I wasn’t on it as much,” Norman said.

Norman topped the pre-season Indy Lights test at Homestead-Miami Speedway, but only had one top five finish prior to last month’s Freedom 100 on the Indianapolis oval, where he led the most laps and finished second by 0.0067 seconds.

It was his second best race finish, having picked up three third places in 2018, and marked a turnaround for his season.

“I used the Freedom 100 as momentum coming here – I knew I was fast here – and I knew I belonged up front. It was just a little bit of soulsearching, but here we are [in victory lane] again.

“The car was solid. It held on all freaking race. The tires were just under me for the whole time. Hopefully we’ll come back and do it again tomorrow.”

Telitz races to third on comeback

Aaron Telitz made the podium in his first uncompromised run of his Indy Lights return at Road America, having been a lapped backmarker throughout the Freedom 100.

The 27-year-old, who finished sixth in the Indy Lights standings in 2017 and ?18 with Belardi Auto Racing, finished five laps down at Indianapolis after?his car?s driveshaft failed on the warm-up lap.

At Road America he was able to race with the field, and took an early lead with a double move. He eventually slipped to third behind Andretti team-mates Norman and Robert Megennis.

“I think we went a little aggressive because we knew starting sixth we’d have to get to the front quick,” said Telitz.

“Crazy start. We had a good start, other guys not so much. Great battles out there with Rob, Toby, Ryan as well. But Ryan was just on it today. He had a great day.

“I think we are going to be even better tomorrow. The weather might throw a curveball in there, but if it’s dry again I think we know what we’re going to do and we’ll be a lot quicker.”

Telitz is not confirmed for any more of the Indy Lights rounds with Belardi, which could leave the team running just one car.