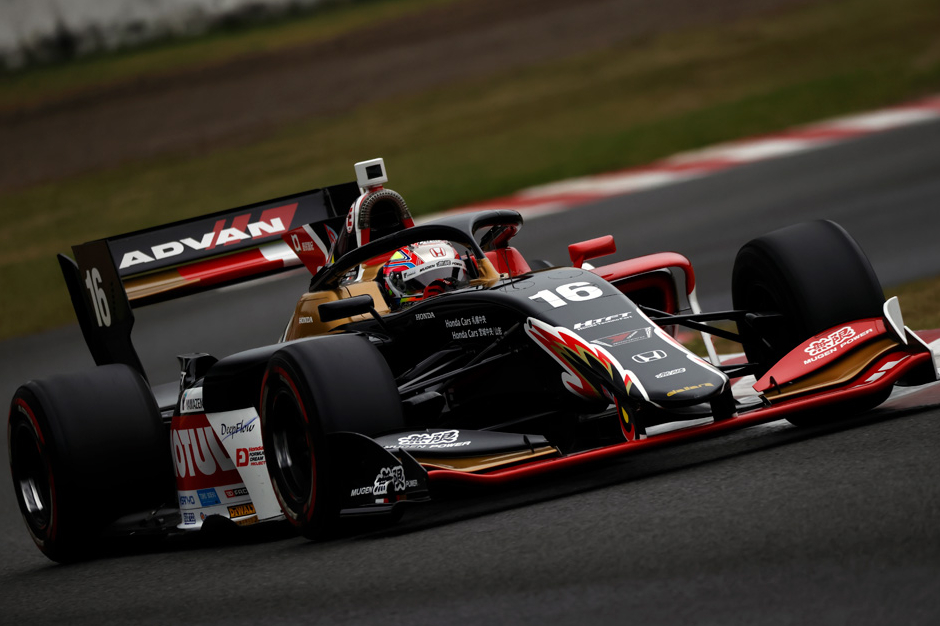 Nick Cassidy, immediately behind Nojiri in the standings and understood to be using an old Toyota engine after his previous one failed at Suzuka, set the pace immediately in qualifying’s first group.

KCMG’s Yuji Kunimoto beat him by two seconds with three minutes to go, but Cassidy replied with a lap two seconds up. Dandelion Racing’s Yamamoto set his first lap a minute later and went straight to the top, by two seconds, and was pipped to first place in the final minute by Nakajima Racing’s Toshiki Oyu.

Cassidy and Yamamoto then bettered themselves for second place, split by 0.010s, and at the end Mugen’s Ukyo Sasahara pipped Oyu by 0.062s. INGING’s Hiroaki Ishiura was 0.208s back in fifth, with Kondo Racing’s Sacha Fenestraz, Impul’s Yuhi Sekugichi and ROOKIE Racing’s Kazuya Oshima also progressing to Q2 after TOM’S driver Cassidy’s was sent to the back after losing laptimes to track limits offences.

In the second group ThreeBond Racing with Drago Corse’s Tatiana Calderon was surprisingly in first until the late improvements, where KCMG’s Kamui Kobayashi, Nakajima’s Hiroki Otsu, Dandelion’s Nirei Fukuzumi and B-MAX Racing’s Nobuharu Matsushita moved past her in quick succession for top spot.

Impul’s title contender Ryo Hirakawa headed the timesheet with 50s to go, and with two improvements stayed there ahead of Nojiri, Sho Tsuboi (INGING), Fukuzumi, Kazuki Nakajima (TOM’S), Kenta Yamashita (Kondo) and Matsushita – all spread by 0.516s. Otsu qualified 15th for his debut.

Matsushita was the man to beat in Q2, and he headed Sasahara by 0.075s (before his best lap was deleted). The title fighters had mixed fortunes: Yamamoto was third, Nojiri and Hirakawa progressed to Q3 in fifth and sixth, and Yamashita was 14th as Kondo struggled.

All eight cars in Q3 were pole contenders, and Nojiri set a record 1m19.972s with 30s to go to claim three points for pole. Tsuboi made it onto the front row at the end, just 0.017s off, and Yamamoto put a point between himself and Hirakawa in the title battle by qualifying third. Hirakawa didn’t improve late on and was eighth.

FRegional Europe season review: How to stand out in a grid of 11 cars