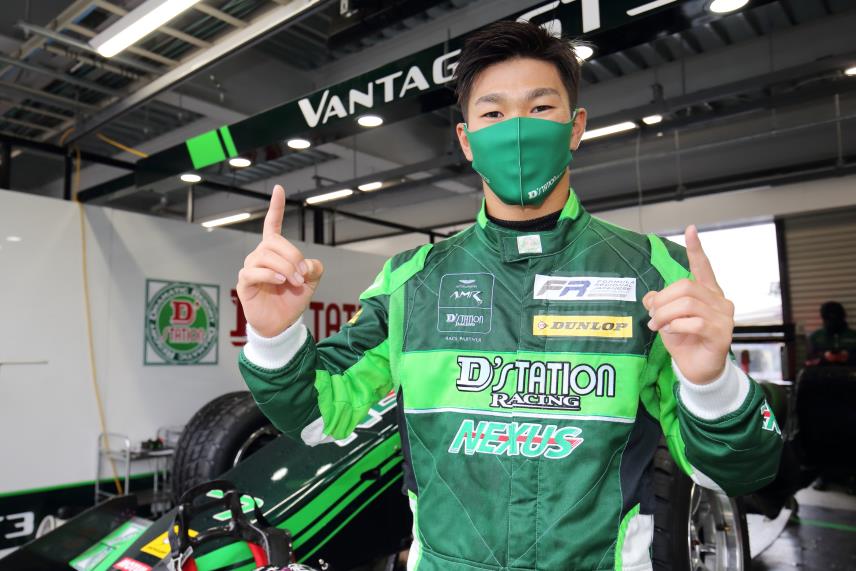 D’station Racing kept on Ryunosuke Sawa for a second Formula Regional Japanese Championship round, and were rewarded with a second win at Sportsland SUGO.

Sawa made his debut with the team at previous round after winning his seat in a shootout, and he ended that first weekend with a victory.

He started his second with a double pole, while points leader Yua Furutani qualified second behind him for race one but then caused a red flag by spinning in qualifying for race two and ended up at the back of the grid.

It was Furutani who had the advantage in race one though, held on a wet track, as he passed Sawa for the lead on the opening lap and never looked back.

Sawa lost second to Riki Okusa at turn one on lap two, but was staying in a lead group of four cars until debuting Honda junior Kakunoshin Ohta started attacking him and while defending he lost touch with those ahead.

That battle eventually dissipated too, and the fight for fifth between Nobuhiro Imada and Ai Miura became the next fight of interest. It took more than half of the race for Miura to get past the Masters class driver, by which point she was then too far back to chase down Ohta for fourth.

Okusa shared the front row with Sawa for race two, on a drier track but in murky conditions, with Miura down in sixth but needing a strong result to keep her title hopes alive.

She gained one spot straight away as Yusuke Shiotsu stalled from fifth, while at the front Sota Ogawa passed Okusa around the outside at turn one to move into second place behind Sawa who was already pulling away.

Ogawa’s time in second place was shortlived as he got shuffled back down a spot and then passed by Ohta on lap three. At this point Sawa had a lead of three seconds over Okusa, and that grew to beyond five seconds before Okusa responded closed the gap down to 2.106s at the finish.

Ohta would have had Miura to worry about in third, but she ended up spending the vast majority of the race defending fourth from Furutani who only took three laps to clear half of the field but could not find a way by his sole title rival. He goes into the final round with a 44-point lead and 50 left to score.