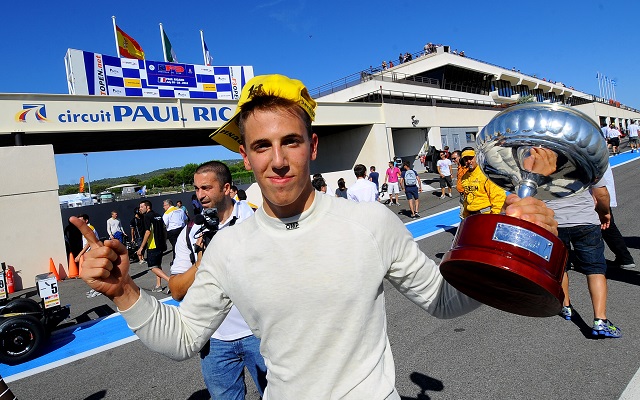 Italian racer Niccolo Schiro will be returning to competitive single-seaters for the first time since winning his European F3 Open title in 2012, as he joins Ibiza Racing for the second Auto GP round of 2014.

Schiro, 20, made his car racing debut in Formula Abarth before switching to F3 Open, which he won in his sophomore year with RP Motorsport – notably taking two poles, wins and fastest laps at Paul Ricard. He landed a promotion to the International GT Open series in 2013 and managed a maiden podium throughout the part-time campaign.

The Italian’s main focus for 2014 is continuing in GT Open, as he signed on with Villorba Corse alongside reigning series champion Andrea Montermini. The 2014 GT Open schedule clashes with the Auto GP season on three separate occasions.

Schiro won’t be the only racer to make his Auto GP debut this weekend, as the series’ grid will also be joined by Angolan racer Ricardo Teixeira, who will take over in reigning teams’ champions Super Nova’s third car.

Yoshitaka Kuroda is the final addition to the Paul Ricard grid, as the Japanese man joins Zele Racing, having 16th in the series with Euronova last year.