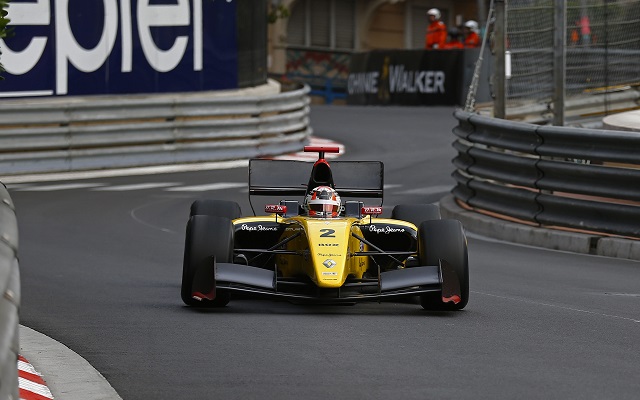 French racer Norman Nato took the second pole position of his Formula Renault 3.5 career on the streets of Monte Carlo.

Nato will head teammate Carlos Sainz on the front row, as his group-topping lap proved was more than half a second quicker than the Spaniard’s prior benchmark.

In the customary group qualifying at Monte, it was Sainz who starred in the opening Group A. The Red Bull junior led the timesheets early on and returned to the top with 11 minutes to go, not to be dethroned again until the end of the session.

Sainz responded to every challenge from closest rivals Marco Sorensen and Sergey Sirotkin, ultimately winding up almost 0.4s clear due to a dramatic increase in pace late in the running.

Sorensen was a confident second, with Sirotkin rounding out the top three. Another Red Bull junior Pierre Gasly took fourth on his Monaco debut, with Roberto Merhi managing fifth.

Nato and Jazeman Jaafar, who started last year’s FR3.5 Monaco race from the front row, appeared to be the chief contenders, trading places at the top of the leaderboards on several occasions.

With less than four minutes to go, a 1:23.707 lap from Nato ensured that pole position would be determined in Group B. Shortly thereafter, Jaafar shaved off four tenths from the Frenchman’s time, seemingly staking his claim on pole.

However, it was Nato who had the last laugh, posting the best lap of the session under the checkered flag and ensuring a DAMS front row lockout.

Jaafar settled for second, ahead of Fortec’s Oliver Rowland, who made it an all-Fortec row three. Will Stevens briefly clocked in in fourth after the flag was waved, but the Brit was immediately demoted to fifth by Swiss racer Zoel Amberg.

UPDATE: Sainz received a two-place grid penalty for impeding Gasly during qualifying and will now start in fourth place.