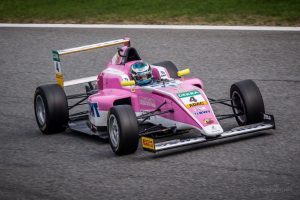 The 17-year-old Austrian, whose father was also a racing driver, has been testing F4 machinery as he looks to move into slicks-and-wings. Earlier this month he starred in Silverstone’s Walter Hayes Trophy, but failed to finish the final.

Gruber’s karting career was spent mostly in Italy, winning the Junior 125 championship title in 2014, and the DAI Trophy in the KZ2 class last year. After impressive tests last winter with former BRDC British Formula 3 team Cliff Dempsey Racing in one of its FF1600 cars, he was signed for the 2018 season.

He ended the season eighth in the standings and as top rookie, completing his pre-season aim, and took two top five finishes in regional championship cameos. In the WHT he was third in his heat and fourth in his semi-final, before a detatched wheel put him out of the final.

“I think since Donington [the final National round] it’s like there’s been a switch,” Gruber told Formula Scout.

“I learned quite a lot there. It was like a switch and I just went a lot faster. I had to start from the very back there and drove up to the top 10, looking onwards I’ve been more ‘OK, that’s how it goes’. I had the same feeling [in the WHT] like in Donington and I was quite quick.? I love it in the wet [at Silverstone]. I think I?ve found a lot of time [since his last Silvestone trip].”

“I got pushed off twice on the first lap, pretty hard,” he said of his WHT final. “I tried to get back but I think we had some damage. Before the car was really, really good. Then I just couldn’t gain any time because something was bent on the rear. Then four or five laps before the end, the wheel just flew off at the last corner.”

His first taste of ADAC F4 machinery came in the summer in a test with Austrian team Neuhauser Racing, which took the driver and team titles in ADAC F4’s predecessor ADAC Formel Masters in 2014, at the Slovakiaring. After the test, the team reported it was “excited” by the potential Gruber showed in the car.

This week he’s been driving Mucke’s car at Monza over several days, and will likely test again before deciding on his 2019 plans.