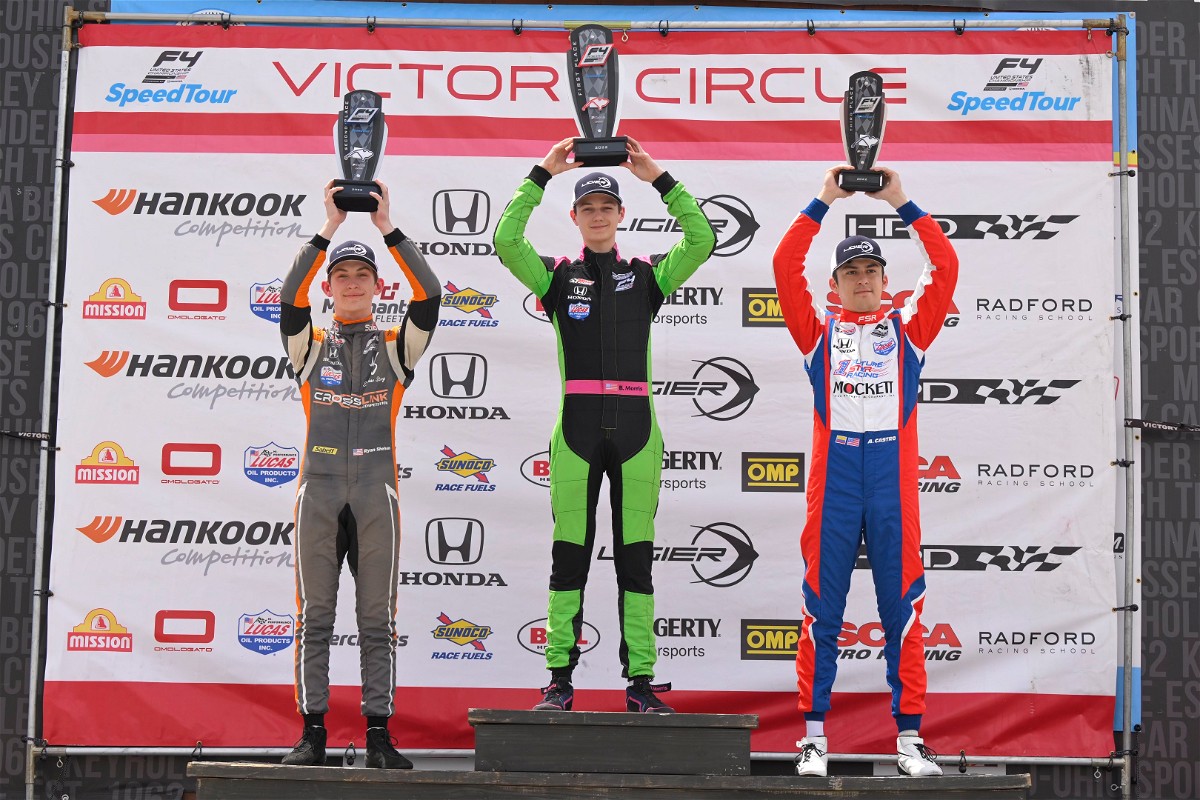 The United States Formula 4 title fight has closed up as the season reached its halfway point at Mid-Ohio, with three different race winners.

Crosslink/Kiwi Motorsport’s Bryson Morris was the first winner, and also the scorer of the most points over the weekend.

A slow start by poleman and debutant Andre Castro meant Morris raced straight into the lead, but his chances of creating a gap were ended by race control. Lochie Hughes and Oliver Westling spun off during the first lap, and although the cars themselves were not an immediate threat it was determined that the pickup of dust from their spins made it too dangerous for racing. As a result, the race ran behind the pace car until being red flaged on lap two.

Morris got to pull ahead when it eventually did restart, with the top positions behind him remaining the same with Ryan Shehan in second, Matt Christensen in third and Castro in fourth. That order stuck until late on, when Christensen made an unforced error and had a huge crash that put him out of the race and led to it finishing behind the pace car.

There had been a few passes for points positions, with Gabriel Fonseca and Alex Berg demoting Noah Ping to sixth with passes on different laps early on.

Fastest lap put Berg on pole for race two, and he held on to the lead until lap four when Hughes tried the outside of The Keyhole and got his move done before turn four.

Shehan was not far behind, and he and Berg soon plummeted down the order and then headed to pitlane with damage, seemingly having been involved in incidents – and possibly the same one.

Noah Ping picked up second place and followed Hughes for the rest of the race, with Morris third and Christensen fourth after he passed Fonseca in the race’s first half. Fonseca eventually finished eighth as he lost out in battle against several drivers. Westling meanwhile was a spinner once again.

Hughes and Ping shared the race three front row and fought through the second lap – with the first running behind the pace car – until Hughes spun himself out of contention at turn four. That handed the lead to Ping, who then lost it to Morris a few laps later as a lead group of seven squabbled. There was then a caution period due to a spin in the midfield, and after the restart the top two quickly broke away to continue their own battle.

Morris had Ping in his mirrors for several laps, and eventually the latter passed by carrying more speed through turn five and then having the better line for the direction change of turn six.

In the scuffles behind, Shehan secured third, Flores spun and Christensen passed Castro for fourth but then forced him off and consigned him to eighth.