written by Felipe Giacomelli 23 May 2014 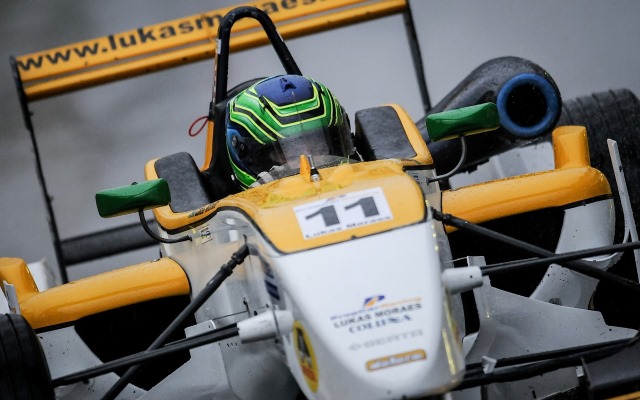 Lukas Moraes set the pace this Friday in a rain-affected first practice for this weekend’s F3 Brazil round at Interlagos.

With five minutes left, the Prop Car man achieved the time of 1m53.908s and immediately jumped to the first place. Moraes was also helped by a late red flag, which ended the session prematurely.

Vitor Baptista was second, 0.610s behind with his Dallara F301. The Cesario driver was the first man to set a competitive time, but was demoted quickly. He managed to regain pace, but wasn?t enough to stop Moraes.

Filling in for Raphael Raucci this weekend in R&R Weissach?s machinery, Renan Guerra debuted in series with third place, followed by another newcomer, Nicholas Silva. The American-born driver raced in some rounds last year in Formula 3 Sudamericana, but only now was able to close a deal to take part in remaining rounds in 2014.

Due to the tricky conditions, most drivers opted to do only a quick installation lap. However, wet track time can come in play, as the weather forecast appoints rain for this weekend.