Mikkel Jensen doubles up at Spielberg 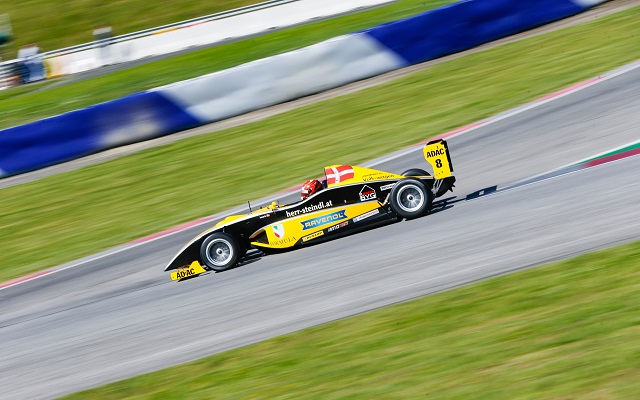 Formel Masters points leader Mikkel Jensen secured another victory from pole position in race two of the championship’s round at Spielberg.

The Dane chopped fellow front row starter Ralph Boschung off the line and held the lead through the opening corners despite pressure from the Swiss driver.

Unlike yesterday, Jensen’s lead over his rivals was hardly comfortable as he never escaped pressure from other victory contenders.

His main championship rival Maximilian Gunther had a stellar opening lap to go from fifth on the grid to third and then proceeded to shadow Boschung. Shortly thereafter, he dived down the Lotus driver’s inside at Schlossgold and managed to emerge out front.

The two ran within a second or so of Jensen for the remainder of the race, whilst, close behind them, Tim Zimmermann and Fabian Schiller battled for fourth.

At a certain point, their fighting caused them to drop off the leading pack and into the clutches of Kim-Luis Schramm. In the closing minutes, Schiller had an issue, seemingly missing a gear shift out of the Castrol Edge corner and, with Zimmermann bogging down behind, Schramm briefly took fifth, only to be overtaken by the rookie on the very same lap.

There were no more position changes in the top six as Jensen held off Gunther and Boschung to take his fourth win of the season. Schiller held on to fourth, with Zimmermann claiming fifth ahead of Schramm.

Lotus’ Joel Eriksson had to fend off Nico Menzel and Philip Hamprecht for seventh, with the two drivers behind him putting on a battle of their own. Menzel eventually prevailed, taking eighth and reverse-grid pole for race three, while Hamprecht incurred a drive-through which translated into a 30-second penalty of added time.

Corinna Kamper and Dennis Marschall rounded out the top ten.

It was a disastrous race for title contender Marvin Dienst, who managed to make some headway from ninth on the grid early on, only to pick up a drive through penalty for track limits and subsequently retire with mechanical issues.