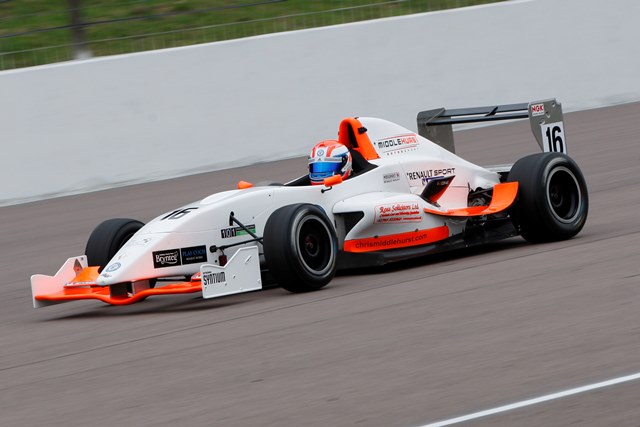 Chris Middlehurst has become the champion of the 2013 Protyre Formula Renault season after a race which saw nine drivers unable to finish, including Weiron Tan, Middlehurst’s closest rival.

The third race at Rockingham started and ended with accidents each causing four retirements. On the first lap Sam MacLeod, Henrique Baptista, Jake Cook and Matias Galetto were all forced to retire as the safety car came out, with Tan keeping his lead in front of Hong Wei Cao and Middlehurst.

After his good getaway, Tan started to build a comfortable gap, however, he was out of the race on the seventh lap thanks to engine failure, with Cao inheriting first place.

The Chinese driver was closely followed by Middlehurst and Jorge Cevallos, who gained seven positions at the start. The race was ended early by a red flag after an incident, with Wei Fung Thong, Matthew Rao, Leo Yee and Ed Brand all involved.

Although Cao clinched his first victory in the category, the man to celebrate was 18-year-old Chris Middlehurst, who was well-deservedly crowned as the Protyre Formula Renault champion.

Mexican Cevallos completed the podium, behind him Joe Ghanem, Matteo Ferrer, Pietro Fittipaldi, Tom Oliphant, Diego Menchaca?and Shahan Sarkissian were all separated by only five seconds at the finish line. Atte Lehtonen completed the top ten, and the people who were able to finish the race.