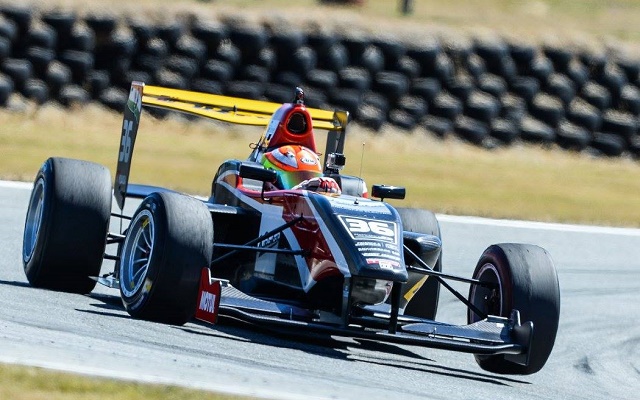 Maini, who had won a race at Teretonga on-track but lost it to a subsequent penalty, survived a race which featured three appearances by the red flag.

The win takes the Indian to just 13 points adrift of championship leader Lance Stroll, who was among the casualties of the race.

Fittingly, the race kicked off with a big pileup, triggered by Thomas Randle spinning out heading into the chicane on lap one. The subsequent collision involved Jamie Conroy, Alfonso Celis and Matteo Ferrer, leading to an early end of the day for the latter duo and a red flag.

At the restart, Maini successfully held off Sam MacLeod for the lead, while Stroll started putting pressure on teammate Charlie Eastwood in the fight for fifth. Eventually, the Ferrari junior collected the BRDC F4 graduate and was out of the race.

Another red flag followed and, after the restart, the field lost yet another car – MacLeod tried to find his way past Maini and came close, but ended up going out of the race.

With Brandon Maisano now his chief worry, Maini ramped up the pace, lapping much quicker than the rest of the field and establishing a solid lead.

The Indian looked set to cruise to the checkered flag, but would not get the opportunity, as Brendon Leitch crashed out of seventh place with four laps to go. That proved one red flag too many and the race was finally called.

As such, Maini celebrated the win, ahead of Maisano and Santino Ferrucci. Callum Ilott took his best finish in cars in fourth, while Damon Leitch picked up a 2015 personal best with fifth.

The marble draw has determined that the top four will be reversed for tomorrow’s race, handing pole to single-seater debutant Ilott.