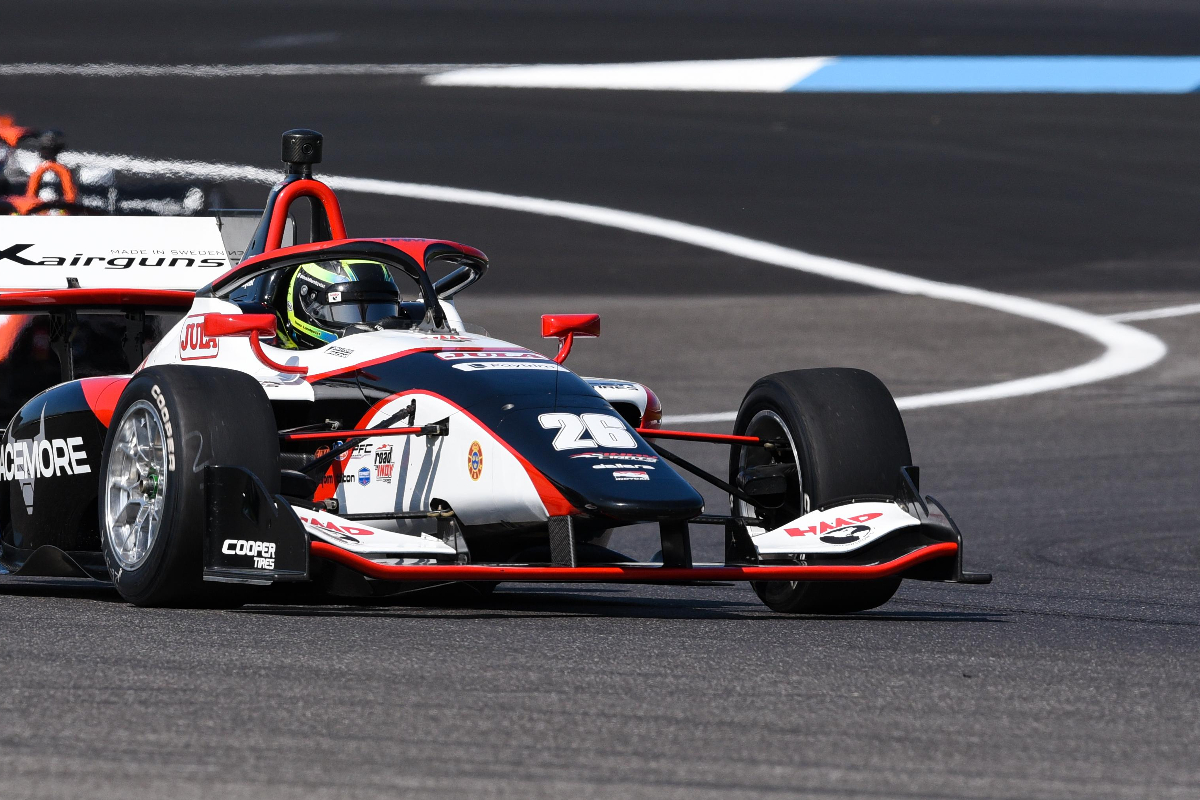 Linus Lundqvist extended his Indy Lights championship lead with victory in a much-disrupted second race on the Indianapolis road course.

The race was halted shortly before the halfway mark and postponed for more than five hours due to weather conditions.

Racing resumed on a wet track which led to a number of drivers spinning off, but Lundqvist put in a faultless drive to take his second win of the season.

Lundqvist got a good start from pole, quickly pulling out a gap to second-placed Matt Brabham. It was a relatively uneventful first half of the race for the pole-sitter, who had a comfortable lead when the red flag was brought out on lap 16.

Lightning had been sighted in the area, forcing an initial 30 minute delay, which would later be extended until after the IndyCar race.

Rain during the pause led to further delay and a wet track when racing finally resumed.

As in the first half of the race, Lundqvist managed the start without issue, but behind him Brabham had run into trouble. A trip through the gravel sent him to the back of the order and promoted Christian Rasmussen to second.

Two caution periods would follow in quick succession – one for a beached Christian Bogle and the other for an incident involving James Roe. Roe had spun trying to avoid Ernie Francis Jr, who had also rotated, and found himself stuck in the gravel.

Not long after the restart, Rasmussen dropped back to fourth, and Lundqvist was finally able to start building a gap to the rest of the field.

With a caution free end to the race, Lundqvist had extended the gap to more than six seconds at one point. A recovering Rasmussen cut that down to 3.599s by the chequered flag.

Danial Frost, Benjamin Pedersen and Hunter McElrea spent much of the second half of the race battling for third, but it was Sting Ray Robb who would eventually complete the podium positions.

Robb spent the first half of the race battling at the tail end of the top 10, making contact with Jacob Abel at one point and damaging Abel’s front wing.

He was P8 when the race restarted and was one of the drivers who faired well in the tricky conditions. He slowly climbed up through the order with clean moves past Frost and Pedersen putting him into the podium paying position.

Robb would finish the race more than four seconds behind Rasmussen but with a comfortable gap back to Pedersen in P4.

Abel took fifth after a strong climb up through the order. He had had to run wide to avoid Francis and Roe during their incident, but quickly made up positions on the restart. A side-by-side moment sent Francis over the kerbs at the chicane, but both drivers were able to avoid contact.

In the closing stages of the race, Abel was locked in a close battle with McElrea that involved the pair swapping positions multiple times per lap. Abel would ultimately come out on top and had closed the gap to Pedersen by the chequered flag.

Frost won a tight battle with Kyffin Simpson to take seventh, while Brabham and Francis completed the top 10.

Another ADAC F4 win for Antonelli at Hockenheim